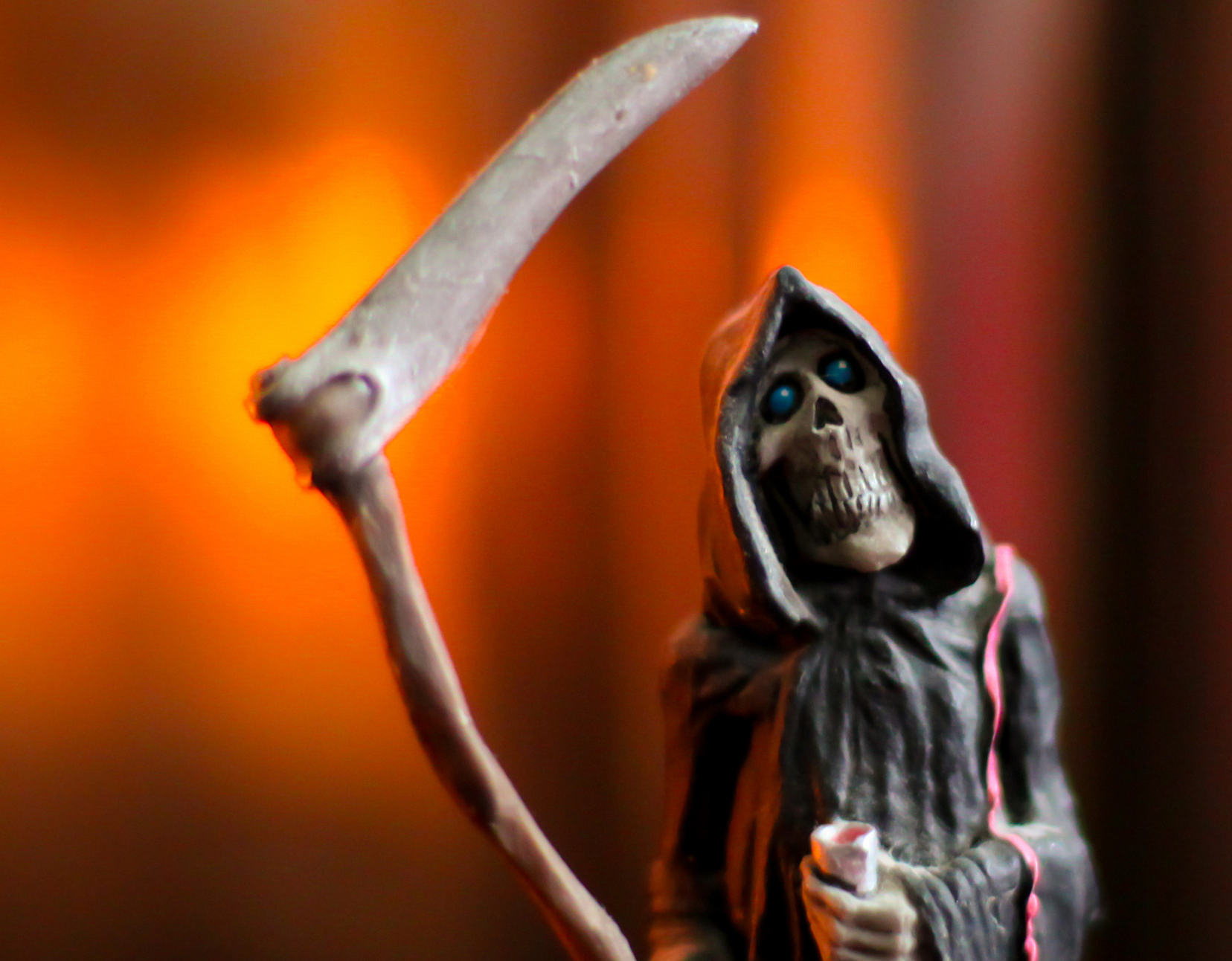 This is How You Will Die

In the morning, Karen found the note on the hallway floor outside the apartment. She had been gone only an hour. There was nothing around her, save for the snow tracked inside by her boots.

Karen took the note inside, closing the door with care. She slid the lock into place. She stared at the detail taken with each stroke of black ballpoint: THIS IS HOW YOU WILL DIE. The only sound in the apartment came from the bedroom as Richard took swift, shallow breaths. Karen sat on the couch and gripped the note between thumb and forefinger. The tips of her fingernails became white from the pressure.

She remained that way as her heartbeat grew erratic. Richard stirred in the bedroom. He called out to her but she didn’t respond.
The force of his feet planting on the hardwood shook the small apartment. Karen wondered how long he’d been awake.

“Did you hear me? I was calling you.” Richard walked into the living room, his hands tucked into the pockets of his sweatshirt.

“What the hell are you talking about?”

Richard ran a hand over his bald head. Karen pulled him onto the couch and pointed at the note.

She mouthed, What is this?

He grabbed a blanket from the back of the couch. “Where were you?”

“Do you see what this says?” She let her voice rise above a whisper.

“Just somebody’s idea of a joke.”

“How the hell do you know that? Who could’ve gotten into the building?”

“People get in. It’s not rocket science.” Richard’s voice was full of sarcasm.

Karen wanted to smack him, though she knew she couldn’t. He bruised easily now. She let the note fall to the coffee table.

“Why do you have to make me feel stupid?” she asked, sliding away from Richard. There was room between them. “Someone left a death threat on our door.”

Richard went into the kitchen. He opened the refrigerator, and shivered.

“What do you want from me?” He slammed shut the refrigerator door.

Karen ran to him, gripping his hand and keeping it away from the stove. She pushed his fingers apart and placed her own in the created space.

“Please don’t do that.” She squeezed his hand and felt a slow, rhythmic heartbeat.

“What?” His cheeks wrinkled in confusion.

Karen couldn’t remember the last time the two of them smiled together. “What if the apartment blows up?” she said.

She let go and walked back to the couch. She picked up the note and held it in front of her. The table wobbled, weak at the joints. She pointed at the words. Richard came to her and kissed her forehead. She nestled her head against his neck. His skin felt cold and stretched.

“I think we should call the police.”

“Oh, Jesus, are you kidding me?” He pushed her head off his shoulder and stepped back. “Some asshole’s playing a prank. End of story.”

He stared at her, and she felt herself growing shaky and hot.

“I’m turning the heat off,” she said, banging her hand against the thermostat. “It’s awful in here.”

“You know I’m cold.” He sat on the couch and hugged his blanket.

A clang of metal rang in from outside. Karen went to the window and looked down at Ninth Avenue. She could still see her footprints in the snow at the crosswalk. She leaned her forehead against the glass, cold seeping into her pores.

Across the avenue, above the French café, she could see his window. It was closed now, curtained, but she pretended he was there, looking back at her. Her body tightened, excited. Her breath clouded the glass. She wanted to sneak back again.

Then, Richard’s body pressed up against her. His hands were icicles. Karen felt him harden as he wrapped his arms around her waist. His fingers tickled her skin. He took her hand and guided it.

“You have goosebumps,” he said.

Karen pulled away and shook her head. “We can’t. The note, Richard.”

She faced him, her hands on his shoulders. They were smaller than they used to be. His muscles had all but melted away. She wondered if he would make it through the winter.

“Doesn’t the possibility of death make it all the more exciting?” he smirked.

Richard whipped the blanket around his neck like a cape and returned to the couch. His eyes were glassy and sunken in. Karen felt as if something heavy rested on her chest.

“It would just be nice to be with my wife once in a while,” Richard said.
She thought she might tell him then about the affair. It was his right to know. After twelve years of marriage, she had forfeited her right to that type of secret.

“I’m trying,” she said, taking a seat beside him, letting her leg drape over his. “I am. It’s just difficult.” She kissed his cheek.

He tasted different, smelled different, and she tried each day to ignore it. She couldn’t leave him, not like this, not now. Whatever she felt, she decided, whatever her impulses needed to be pushed aside. She was responsible now, for him.

“What would you have me do?” he asked eyeing the note.

In the space between his breaths, Karen wanted to say something to fix him.

“We should call the police,” she said. “There’s nothing else to do.”

Richard found his cell phone and walked into the bedroom. Outside, Karen heard voices growing. The curtains across the street remained still and undisturbed. She wished the window and glass were not so clear. The wind howled down Ninth Avenue.

“They said not to worry,” Richard called out. “They’ll look into it they said.”

“What is that, look into it?” Karen slammed the note onto the table. “What happens to us in the meantime?”

Her voice pulled tight, she hit the tabletop again and again. The old legs teetered and wavered and finally gave way. Afterwards, the apartment was still. Karen could hear Richard’s breathing, fast and fitful. He pulled the blanket taut around his body.

“I’m putting the heat back on,” he said, moving to the thermostat. “It’s damn cold.”

Karen stared at the broken table and scooped up the note. She read it over in her mind and noticed how pronounced and familiar the dark words seemed against such a bright background. Each time, she focused on a different word: THIS, HOW, YOU. As she glanced up from the note she found Richard standing in the kitchen, watching her. He looked petrified. There was something else. He knew. Maybe he had always known. She had broken him and the cancer had broken him and soon, too soon, he would be dead. She crumpled the note in her hand and wished the words had never existed. Richard needed them to, she knew. He shivered as heat flowed back into the apartment. There was a distinct smell to the heat, and she wondered if it had always been there. It reminded her of winter, of the wind and snow and harshness just outside the window.

Tossing the note back onto the oak, Karen moved to Richard. She settled her body into his, pulled him close. He opened his blanket and covered her shoulders. There was warmth there. She wanted to make him breakfast but she couldn’t move. Instead, she leaned into him and believed, for a moment, he was holding her up.

Danny Goodman is a writer and editor living in New York City. His fiction and nonfiction have appeared in various publications, and his novella, Somehow There Was More Here, was published by Found Press. When not writing, he co-edits the literary journal fwriction : review. Above all else, he adores superheroes and endless coffee. Currently at work on his first novel, he is badly in need of a nap.

Fiction
Previous PostWhen We Lived at the Y
Next PostBOOK REVIEW: American Meteor by Norman Lock