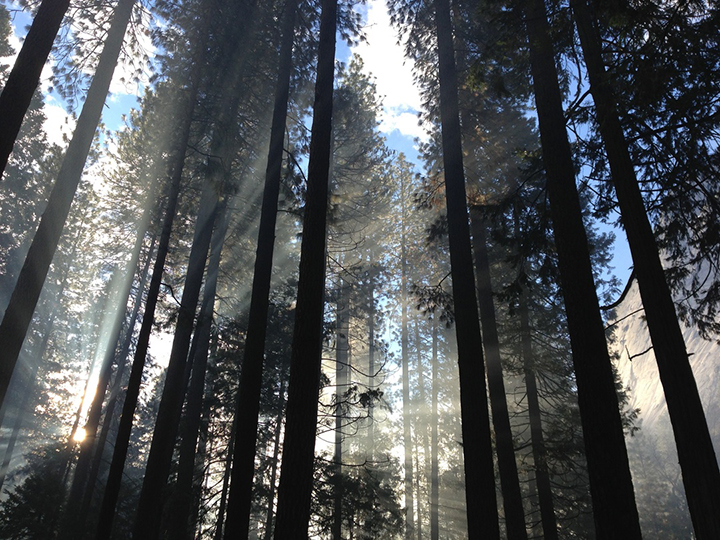 In the mornings he rose before five, whether there was school or there wasn’t, ringed by the cold walls of the cave, pale light, sharp air. He walked quickly through the forest to the stream, where he stripped off his shirt. It took him five seconds to wash his hair, face, feet, and under his arms. An hour and a half to walk the eight miles to school. Where he was with me.

I left the pack of girls when I saw him, walked slowly towards him and felt the wary gazes moving towards us from around the school yard, the buzz of chatter that paused only a moment. You smell like pine, I said and took his hand.
He did have a house, though, where he slept in the coldest months. Past the edge of town, a wooden building with peeling yellow paint. I went there with him a few times, and each time his mother sat in the same place, as though she never moved. In the kitchen, with a cold cup of coffee in front of her, her long grey hair falling limp on either side of her sharp-boned face.

She looked somewhere behind us, out the kitchen windows.

There was the same pile of dirty dishes in the sink as last time. A film of dust over everything. Julian found a box of stale crackers and a few apples in the pantry. Let’s go, he said and pulled me out the door.

Outside, looking back at the house, I could see Mrs. Douglas’s unmoving silhouette in the window. Above the house, what looked like thousands of grey butterflies rose slightly from the roof and hovered there. It looked like their eyes turned towards us. To me. Observing. And then, just as suddenly, they settled back down and the earth was still, the house just a house.

As summer came and ripened, he spoke less and less. We climbed trees, picked berries, made traps, caught harmless black snakes and tadpoles, fished. Sometimes we did the one thing I could do better than he—we swam. We walked for miles and miles through the pathless forest without him talking to me.

This is the troll forest, I said, because of all the moss. And back there is the elf forest, where it’s drier and the evergreen trees are.

He didn’t turn around, but I think he smiled.

He rarely touched me, but I liked to pretend otherwise. Days in town, I picked the burrs out of my hair, put on sandals, a summer skirt, lipstick, walked slowly down the main street. The other school girls and I nodded at each other. He was still a wild thing I knew everyone wanted.

Do you? they asked.

I shrugged. He’s sweet, I said and shook my head. He’s sweet when you’ve got him to yourself. He’d never do anything I didn’t want to.

I heard them sigh.

But the truth was he was turning wilder. I caught him growling in his sleep. He bared his teeth at me once when I touched his collection of fossils and strange rocks. I dropped them back into the pit he’d dug for them, but he glared at me until I backed away. He started swimming all the time, willing himself to be better. When I swam with him, he was after me, his fingers touching my ankles quick as a bee sting, but I was quick enough to kick away. On the shore, we panted, sitting on an old blanket.

One night he sat feeding the fire, not looking at me. When I stood to leave, though, he sprang to his feet and blocked my way.

It was over in two minutes.

We were in the cave. He pushed me to the ground on top of his pile of blankets.

Julian, wait. It was dark, but still I could see his eyes, cold and blue, blank like a creature that did not understand language. No, I don’t want—bruises on my arms.

I could not move my legs. My clothes ripped and pulled aside. He kissed me, but it felt like sharp teeth. It was over in two minutes. He lay there with his eyes staring past me as I got up to leave.

I told myself not to look back, but I did anyway. He was sitting up, still staring beyond me, not moving. Even when I paused and opened my mouth to speak, he said nothing, didn’t reach a hand out to me. He sat with his skin tensed, his eyes flickering sharply. He breathed out deeply and slowly and so viciously it sounded like a snake´s hiss.

Lillian Kwok is originally from Philadelphia, and now lives and studies in Sweden. She has a chapbook published by Awst Press, and her work has been published in the Cortland Review, Paper Darts, Salt Hill and other journals. She holds an MFA in writing from Vermont College of Fine Arts. Find her on Twitter at @lillian_kwok.