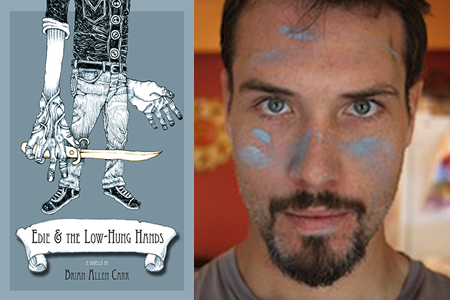 Brian Allen Carr’s stories have appeared in McSweeney’s Small Chair, Hobart, Boulevard and other publications. His books include Edie & the Low-Hung Hands, Vampire Conditions and Short Bus. He lives on the Texas/Mexico border and teaches at South Texas College. He can be found at www.vampireconditions.com.

I held Edie’s hand at Welder’s funeral and wondered how long I should wait. I’ve never seen a mirror I liked much, and just then, the sturdiest branches on the cemetery’s broadest tree became a fixture I could string my neck from. I saw myself limp, blue and hung, swaying in the breeze, deceased, but I thought how oddly my hands would dangle as I choked out there. It seemed four months would be long enough, but of course I didn’t make it. Six days later I stood in the damp field behind their home swatting at chigger bites and slashing Johnson grass with my blade. The sunset grayed, and mocking birds sang their noise, and Edie sat in the breathy glow of a low-watt bulb on the porch, pouring something from a green-glass pitcher that hummed colorful in the light. She knew it was I standing out there and waved hello with the back of her hand. I motioned her to come off the porch, but she shook her head no. I held my arms out like Jesus, my sword aloft.

​‘I could hold you so good,’ I said, but she stood and went in off the porch. ‘Then why’d I do it?’ I hollered as the screen door rattled closed against the frame.

​After that, I went slashing my way through the field.

​Monkeybicycle: This is a book built on violence and longing. It manages to be beautiful even as it ​horrifies, and compelling even as we grow to hate Marlet until that hate becomes ​something maybe even approaching love and pride. Where did the idea for ​Marlet come from and how did you make him work?

Brian Allen Carr: I think Marlet is part Meursault and part Anton Chigurh and part Cool Hand Luke and part that guy from the movie The Mask and he’s named after a minor character in Horseman, Pass By.

So, the book takes place in the future. The book serves up lots of death.

I mean, there’s clearly a neo-absurdism thing going on. I even mention Sisyphus at a point in time. Longing is a huge part of it, but it’s always this: we can only truly want the things we don’t have and once we have them they’re not the things we wanted, because that’s impossible. We can’t even get the milk shake we want. It’s never the perfect consistency. How many times have you gone to shake a hand and gotten some confusing palm that’s too strong or two weak or two sweaty or, for some reason, a fist.

Did I mean to put on this shirt this morning?

I think where I find absurdism peculiar, especially in regard to say The Stranger, is there’s this assumption that people with an absurdist philosophy do not evolve. You mean to tell me Sisyphus always pushes the rock the same way? Every time?

I taught The Stranger this semester (mainly because there’s a PDF of it online) and one of my students brilliantly said, “It’d be better if he got out of jail.”

It’s absolutely right. It’s chicken shit of Camus to kill him off. Keep that fucker in a box for thirty years and then let him out and tell me he’s unchanged. He might not pick up Jesus, but he’d push his rock differently. He’d be begging Marie to marry him, I reckon.

So, yeah, I hope that Marlet changes. He doesn’t entirely, but there are a few things. He becomes more likable, more human. Essentially the same, but with a different stride.

​Mb: I was lucky enough to see you read from this in Boston at AWP, which caused me ​to immediately buy it. It was the best reading I had ever been to because you ​made it like a performance, which is so different from my previous experiences ​with readings. How important are readings to you? How do you prepare?

BAC: Man, I don’t really think about it. I’m glad you liked it.

I mean, there are some really good readers and some really bad ones, but I think what everyone has to do is just be natural. If you’re loud, be loud. If you’re shy, be shy. People can spot phony every time.

Important? Um, I’m flattered when I get asked read, I guess.

We have a pretty lively reading scene down here on the border. Writers like Edward Vidaurre and Erika Garza-Johnson have done a phenomenal job of establishing a live reading scene. I’m usually the only white guy who reads at them. Maybe that’s why I’m a decent reader. I’d rather be a badass reader than just “that white guy.”

Mb: ​The setting of Edie & the Low-Hung Hands is surreal, desolate, and full of ​danger. You currently live just off the edge of Mexico in Texas. Does the ​Texas/Mexican landscape feed into this at all?

BAC: Yes. Texas is nothing if not surreal, desolate and full of danger. Have you been here? It’s like God ran out of the good stuff but didn’t want to leave it blank. I love it so much.

​Mb: ​The voice here is addictive and reading becomes its own compulsion. The ​language is both beautiful and conversational. Did this come naturally?

Man, voice is everything to me.

I love/hate Gary Lutz’s “The Sentence is a Lonely Place.”

My favorite musicians don’t stare at the scales as they’re composing the music. My favorite cooks don’t weigh ingredients.

Ferran Adria weighs his ingredients. I respect him immensely. But I’d rather eat street food.

Sometimes I think I’m doing voice well, and then I read some Brautigan and hate myself.

So chipper, his music.

Some people are real hot on the intro to McCarthy’s Suttree. It’s marvelous, but it’s almost confetti–just colors floating back down.

Of course, they’re colors beyond my writing ability.

With Marlet, because he is the first person narrator of the thing, I tried to put myself in his visceral heart and let his tongue lash through my fingers.

Writing in trances isn’t hip though. I mean, Beckett did it, but, man, you’re supposed to think about it now.

I slit a throat; I stabbed a back, a Cotton turned; I gutted him, The next nearest me went for his sword, but as he reached I reamed my blade through his eye, the tip thudded the back of his skull, and I knew I’d destroyed his brain. Four were dead without resistance. After that swords were drawn. I danced back as one of them came upon me. We touched swords once, and then I’d killed him, my blade just sort of finding his heart. Five.

​Mb: For all the beauty of language and the maddening psychological introspection, ​this is a top notch swashbuckling action novel. Did you find that balance a ​challenge?

BAC: People who wholeheartedly put plot above language or language above plot are just assholes.

They’re making writing political because it’s the only way they can be as relevant as they want to be.

I’m an asshole too. In other ways, I’m certain.

I love language. I love plot.

You can do both things. Look at Candide. At Something Wicked this way Comes.

Shit, look at Shakespeare. The language is gorgeous, the plots are entirely translatable across languages and eras and contexts and worlds.

But I’m not answering the question.

Nah, it’s just the way I like to write. I guess. I don’t know, to me, that’s the way the world seems to work. You’re either doing or you’re thinking or both or neither.

Purchase a copy of Edie and the Low-Hung Hands here, & read more from / about Brian Allen Carr here.