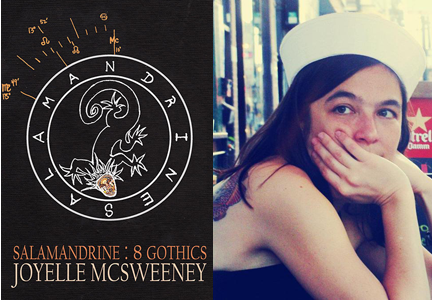 Joyelle McSweeney is the author of Salamandrine: 8 Gothics (Tarpaulin Sky), Percussion Grenade (Fence), and four other books. She edits Action Books, contributes to Montevidayo, and teaches at Notre Dame.

​Monkeybicycle: ​Transformation, whether personal or social, repeats often in Salamandrine: 8 ​Gothics, though never in the same way. Motherhood would be the other word that ​repeatedly came to mind while reading this. Tell me about transformation and ​motherhood.

Joyelle McSweeney: Well I’m not sure if I was transformed by motherhood so much as revealed to be severely lacking. For me motherhood was an apocalypse, a rending of the veil, a rendering of the fail. I nearly died; that was a new thing. I developed a labor complication normally associated with heroin-addicted teenage sex-workers. I bled like crazy and my daughter’s placenta looked like hamburger meat, according to the nurse. A fittingly Midwest simile. I became so same, same. I had a sense of shame, that was a new thing. Becoming what other people thought of as steady and wholesome shamed me, dismayed me. My sense of myself as a 21st century fox, a pixie or a pixel, a moving picture, engaged with the world, a piece of information joining various smart fabrics in bouncy new bunchy ways was immediately stripped away, and I was left with a new image of myself as nothing more than a cultural/biological category: a mother, and, more paralyzingly, a ‘woman,’ subject to all kinds of restraints and nonnegotiable requirements that I had merrily ignored before, basically as a result of my class but also my male-type aggressive personality. As I lay dying, the Hoosiers in the hospital just called me Mom. To have a maternal body felt like a punishment, or, more specifically, a ‘sentence’, something continually pronounced.

At the same time, these Hoosier ladies in the hospital also started to seem at least half-divine. As I lay dying, they counted medical instruments in unison to make sure there weren’t any left in my cavities. They twittered like Yeats’s mechanical golden birds. “One and two is three and one is four and one is five”. My baby didn’t like being alive and tried to crawl away. They couldn’t test her hearing because she was reacting to everything in the room. She had eyes like a snake. No one had ever seen that before. The nurses went outside for their smoke breaks. They went on diets. A visiting male nurse from Nigeria had to show me how to change a diaper. I was so weak I couldn’t stand up if I was also holding my baby. But they were strong. I was enamored of all these superhuman ghosts. I loved them. I love them.

These stories are written about the Rust Belt and mostly about the women who live here. They are full of that exhaust, dismay, ingenuity, a kind of genius for triage, shock, love, death, commitment, smoke breaks, nurse’s shoes, and hate.

Before I can respond my eye catches my daughter at the edge of the market, holding up her skirts. In place of her black boots she is wearing the wooden clogs issued to the urchins of this place. I grab her wrist and begin slapping the back of her neck, meanwhile reaching out to slap the sallow cheeks of the children gathered all around us.

Mb: ​These stories are hazed in the phantastic, with all this darkness and otherness ​swirling at the edges and then consuming, while the language careens across a ​register of lyrical to more conventional. What is it about being alive that makes ​living so strange? so terrifying?

JM: Well this book is specifically about the Rust Belt. I see the Rust Belt as the kind of canary in the coal-mine for unsurvivable American life, and also a kind of mine-shaft linking to other barely habitable world habitats. There is a sense here that life is so f*cked that there is no way we can ever dig ourselves out of this. Jay-Z is not going to fix this one. Just the name of the region says it all. Rust is a chemical process: it’s oxygen kissing at the metal vampirically and bringing the show down. Bringing it all back home. A slow show-stopper. The ground is full of metals and chemicals. Like everywhere, chemicals are everywhere. If you don’t want your baby to get skin cancer, you have to cover her with carcinogenic chemicals. If you want to talk to your mom on the phone, you have to hoist to your ear metals harvested by forced labor Africa. When your phone dies you can send it to be picked apart for its toxic metals by children in China. Be sure to upload your babypictures to the cloud, first! But at the same time these dazzling chemicals, these devastating breakdowns and murderous conveniences register incredible effects. We can’t live in any time but this time. The Anthropocene with its omnipoisons, die-offs and strange spectacles is what we got. Colonie collapse. The laser show on the profiles of Confederate generals at Stone Mountain, Georgia. My stories want to continually pivot between the high and the murderous, phrase by phrase.

What he saw inside was a burst spectacle, a room filled with stinking pus, flaps of skin and tissue driven into the walls, a room which pulsed and seemed to be digesting a horrible gallumaufry, the fur, bones, and innards of an animal rotted beyond recognition, a boy so skinny his ribs, wrists and legbones had finally splintered through his flesh, a girl with bulging eyes and a wrung neck, a peltless dog whose every muscle was being slowly worked from the bone, a suppurating wound without a boy left to speak of, bits of shell, tooth, hair, tongue, claw, and fat bobbing and resurfacing in the fuming fluid which bathed everything, bathed even his own eyes. Then he closed his eyes, opened his mouth, and he took it all into his mouth, the room and the world, the causes and their outcomes, the couch and the game, the gun and the stash, the fix and the flesh, the anger and the relief, the hope and the violence, the illusions of adulthood, chief among which is childhood, the growth and the decay, the decay and the rot, he took it into his mouth until his mouth was warm and leaked a little and bulged at the lip like a piteous frog’s.

​This is Beauty speaking, with my warm mouth.

​Mb: Salamandrine: 8 Gothics is a chaotic collection that often left me reeling, but, ​somehow, it made so much sense, and was oddly beautiful despite its strangeness–or ​maybe because of it. The Warm Mouth, in particular, is a story that really crept up ​on me, in terms of emotion. At first it was almost a dance of language and oddity but ​it struck me as very beautiful even in its grotesqueries by the end. Where do you ​find beauty in the world?

JM: I’m a big believer in the Sublime, in which Beauty delivers the knockout punch. The Sublime is where plus and minus somehow occupy the same space and are simultaneous to each other. That big hoary mountain is smuggling a deep decline. The one is the zero. This is where digital space collapses and births the virtual, I think. The virtual is the Sublime. It’s killer candy. It’s synthetic lotus for all your lotus-eating needs. This is why dismay and shock and exhilaration and joy are all bio-identical with each other and can pass through the protective membranes and put on shock plays in each other’s normally separate operating theaters. The jouissance has the puissance. It’s why Looney Toons are so violent. One lump or two? Th-th-th-that’s all folks.

More specifically, I love the duplicitousness of language. The bad money of it. The things that rhyme and the things that don’t. The instant deflation from hi- to lo-. The fact that it wants to be somewhere else. The fact that credit is the same as debt. The mouse with the juice has no time for justice. Don’t Tase me, bro.

Mb: ​In many ways, these stories reminded me of William Blake, especially “The Chimney ​Sweeper.” How important is the language employed in critique and rebellion?

JM: Yes. YES. Let’s just paste that whole poem here. There’s a knockout over-saturation to Blake’s simplest verses. The language is just indivisible from itself. The Songs of Experience swallow the Songs of Innocence whole and from then on its like a GIF continually switching back and forth, one mouth aping the words of the other. Eerie delirium. Such perfect pedagogy. I love the saturation of his images, the automatic simplicity of the verse forms and rhymes, the surprises (“Sound the flute! Now it’s mute”. What violence happened between those two phrases?), and the sinisterness of the “Innocence”. And there’s that duplicity, that Sublime doubleness that error communicates: ‘weep, ‘weep!

Johannes and I OFTEN remark that the only information we had about babies and childrearing before we had kids came from Songs of Innocence and Experience.

OH, right, critique and rebellion: Rebellion is an antimotion, a reversal of currents of power, and like cancer it always starts in a single cell, and the single syllable of language doing not quite what it intended to do—and more than it has permission to do— is probably enough of a spark. The pun is a revolutionary syllable.

Mb: ​You write prose, poetry, and plays. How do you choose which to write in? Are ​certain subjects or themes more conducive in one form over another?

JM: My feelings on this have decayed as I have aged. I don’t believe in genre hygiene. Each writing project seems to stir with a kind of form—a lyricism or a crispness, a languor or a fervor, a paragraph-space or a column-space, an identified speaker or a submerged speaker, and its from these particular limps and aberrations that genre begins to emerge in each piece. I think genre is a tool for readers more than a tool for writers, a way to situate one’s self in the reading process so one isn’t entirely overrun. Having said that I will also say the opposite—it’s fun to think of genre as a drag show, or genre as the body of one’s victim that the serial killer wears around and makes dance the can-can. Or, more neutrally, those dinner rolls that Charlie Chaplin makes dance, or the house that falls down around Buster Keaton. Make it do stuff. Gin up a grin, organ grinder, death’s head. That’s the thing.

Purchase a copy of Salamandrine: 8 Gothics here, & read more from / about Joyelle McSweeneyhere.