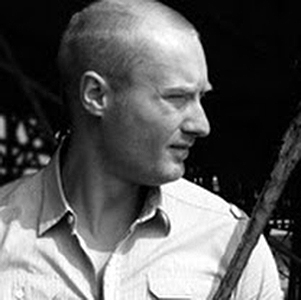 Craig Wallwork is the Pushcart nominated writer of the novels To Die Upon a Kiss, The Sound of Loneliness, and Quintessence of Dust. He lives in West Yorkshire, England, with his wife and daughter.

​Monkeybicycle: ​​Your first book, Quintessence of Dust, is a short story collection full of ​wickedly funny and beautifully surreal stories, but your two novels that’ve ​come out this year are locked into reality. Is this a difference in you as a ​novelist versus a short story writer? Or is this, perhaps, a bit about growing ​up? Your concerns as a writer changing?

Craig Wallwork: If I’m being honest, I don’t enjoy writing novels. The process isn’t as enjoyable as it is with the short story. But to be taken seriously as a writer, you need to write a novel. I think that’s because we fear most readers would rather buy a novel than a short story collection. Even though a reader is getting more stories for their money, they feel they’re receiving less. That worried me. There are plenty of writers, alive and dead, who are great at short stories, but very few write nothing but shorts. Raymond Carver, Amy Hempel, and Etgar Keret are three that come to mind, but I’m struggling after that. So I felt that to be considered a serious writer, I had to write a novel. To appeal to a larger demographic, I needed to commit to a longer narrative. You’ll notice most of my novels are very short though. Around the 60k. I’m all serve and no game. If the short story is like the moment you fall in love with a person, where every day is filled with magic, beauty and hope, then the novel is the tedium and reality of familiarity, where love has faded into annoyance, beauty has turned ugly, and hope is only of an end.

​Mb: You’ve recently become the fiction editor at Menacing Hedge? How has this changed you ​as a writer? What have you learnt from being on the otherside of the page?

CW: You learn a lot from reading submissions. The opening paragraph has to be the strongest part of the story. Not the best part, but definitely the strongest. The reason is that the volume of submissions waiting in the queue impacts greatly on you reading that story. In the back of your mind you’re thinking, “I have an hour to try and get through as many stories as I can before picking up my kid from school. Show me something worthy of reading on!” And most writers don’t. You have to be brutal because you can’t afford to read 7k of lacklustre prose where nothing happens. Since taking the job I’ve been surprised by how many writers don’t grasp this. I’ve also been surprised by how many stories are about death, murder, rape and violence, but with no motive, or depth to the characters or narrative. I will accept these tropes if the characters are rich or the writing is amazing. But most stories are constructed much the same way a drunk makes a sandwich. This has been the biggest learning point for me. In the past, I’ve been guilty of delving into these subjects without forethought or rationale behind the decision. I’ve committed words about death in such a ham-fisted way it’s embarrassing on reflection. I’ve often said a writer only truly knows when they’re good as soon as they realise how much shit they’ve written. It’s that level of self awareness before pressing the submit button that most people are blind to. I also understand and appreciate the pressures an editor has now, and how precious their time is, so I don’t get too upset when I receive a rejection. If the opportunity ever arises, most writers should edit a magazine, or journal. Even if it’s in a guest editor capacity. You’ll realise that rejections are never personal, and that measured against most submissions, you’re a damn fine writer.

There was nothing to suggest she was suffering or that she was petrified, merely that the eye was growing to accommodate a much bigger vision.

Mb: ​Though The Sound of Loneliness and To Die Upon a Kiss are drastically different, they’re ​also full of the same sense of desperation and longing. Longing for love, for beauty, for i​mportance. How are Daniel Crabtree and Sadler Truman the same and how are they ​different? How much of you is caught in between these two men?

CW: Crabtree and Truman are the same, and I am them. Writers are just the literary version of Russian dolls – within them are several smaller versions of themselves they use as characters in their works. Even Fitzgerald made the remark that all his characters, even the women, were “little Fitzgeralds”. All good novelists are hermaphroditic. So that sense of longing, for love, beauty and importance, they are my own needs, at one time or another. Sadler’s pain, his fear of death, his want for intimacy and a loving family, a father and mother, they are motions or feeling I have felt, or feel. And Crabtree’s bitterness, misanthropic attitude, his insecurities as a writer and the need to be human, they are all my desires and weaknesses. Any writer that tells you their protagonist is nothing like them is talking out of their arse.

Mb: ​Your work always impresses me and you know I’m a great fan; I find myself ​promoting it every chance I get. I always recommend Quintessence of Dust as an ​introduction to your work, but I’m curious as to how you would answer that question. If ​you could recommend only one of your books, which would it be and why? Which best ​captures you as a writer?

CW: I would say The Sound of Loneliness. Only because it contains everything I love in a book; humour, sadness, pain, misfortune, unattainable love, and great writing. It also doesn’t end the way most people wanted it to end. There are no answers given, no reconciliation. Crabtree doesn’t change that much, regardless of the experiences he has undergone. It is almost a worthless, meaningless conclusion, and because of that, it was a perfect ending. I read a few reviews where people became so frustrated with Crabtree because he had no self awareness, even at the end. They wanted closure, and for him to accomplish his goal of being a great writer. That he is arrogant at the beginning means he must be loving and endearing toward the end. Sorry, I’m no hack. You don’t get the nice ending, and Crabtree is still maddening and frustrating a character at the end as he is at the beginning. Life isn’t predictable, and neither should novels be.

When time came for my pearls of wisdom, my father took me walking through the woods in Worsley. Amidst dying leaves and birdsong, he told me a man would measure suffering in terms of conflict and disease, whereas a woman will fall easily into depression should a pair of shoes not fit. He did not say this. My father was not so poetic. He hated the outdoors, especially in autumn. No, he woke me in my bed one evening stinking of booze and cigarettes and put me in a headlock. I was told that women are ditzy fuckers good for only one thing. That he did not tell me what this one thing was assured me he was confident I knew. I did not, nor did I fully comprehend how misogynistic he was until he told me that the only reason God did not assign balls to a woman is because a man will only ever need one bag to carry them around in.

​Mb: A short story collection last year, two novels this year, how many books should we be ​expecting from you in 2014? I’ve always been a fan of linear progression myself, so I’m ​hoping for three.

CW: There’s a very strong chance I’ll have another three books out next year too. I have a chapbook coming out in March through Perpetual Motion Machine Publishing. It’ll consist of three stories that lean toward absurd horror and is titled Gory Hole. I should have another novel finished and edited by then which I’ll use as my first self-published title. That may seem like a backwards step, considering I have two novels published, but I’ve been reading up on self publishing, and I’m keen to try my hand at it. Full autonomy appeals to my obsessive behavior. The novel is tentatively called Adam’s Rib and it’s about a morbidly obese guy who goes from geek to celebrity almost overnight. It’s told through a series of emails to a police officer, where the protagonist is confessing to murdering the celebrity fat man. And finally I should have another short story collection finished by the end of the year, which I’ll be sending out to a few publishing companies. It’s my best shorts so far, and I’m really proud of them all. It’s similar to Quintessence is as much as the stories are rarely seated in reality, but that’s about it. I wanted this collection to be more thematic, and I got the idea after writing “Night Holds a Scythe,” which is the first story from QoD. That story resonated more than any other with people, and sensed a lot of that was because nearly everyone put themselves in the father’s position who was desperately trying to save his daughter’s life. That parental anxiety, or fear, became the catalyst to this new collection. Every story featured will be about parenting, or wanting to be a parent, the unconditional love, or perhaps the devastation of living in a house where there is no love. It’s a powerful collection and I’m hoping will be universally appreciated.