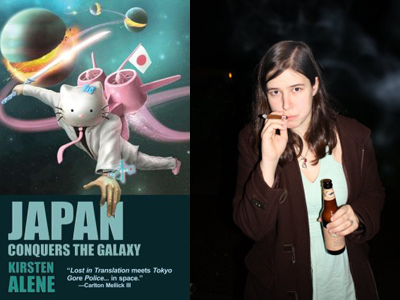 Kirsten Alene lives in Portland, Oregon. She is the author of Unicorn Battle Squad (2012) and the novella, Love in the Time of Dinosaurs (2010). Her work has been published in Amazing Stories of the Flying Spaghetti Monster, Christmas on Crack, The Magazine of Bizarro Fiction, Bust Down the Door and Eat All the Chickens, New Dead Families, Small Doggies Magazine, The Battered Suitcase, Ellipsis, and Rivets.

​Monkeybicycle: Japan Conquers the Galaxy is a truly fun read. Its peculiarity doesn’t so much jump out ​at you through a window, but wanders in through the door you didn’t know you left open. ​It makes all the strange occurrences seem almost reasonable. It’s sort of like a lighthearted ​Kafka effect. How do you approach the fantastic and bizarre elements in your work?

Kirsten Alene: As a kid I read all the time and one of my favorite authors was Dickens. Not because of all the virtuous poor and benevolent wealthy. I loved the sometimes terrifyingly grotesque side characters, gothic locations, and impossible weirdness that would sneak its way in almost magically, like in Nicholas Nickleby. It’s a story about a poor young man trying to provide for his once wealthy family, but his mother is being courted by an old man with dementia who throws produce at her as a way of demonstrating affection. My favorite bizarro stories are the ones where the strangeness trickles in from the side, rather than being the main focus of the story. There’s a thing people say, that you should write what you know. I don’t know much about Japan, but I know about feeling awkward, so Japan Conquers the Galaxy is more about feeling awkward than it is about Japan.

Mb: ​This might sound like a stupid question, but why write bizarro? I think bizarro has a real ​dividing factor for readers. There are many who find it useless, but then there are those​who are irresistibly drawn to it. Why do you think that is?

KA: My family has been asking me that for years. ‘Why bizarro?’ is easy, though. I’ve always written bizarro. When I was eleven I wrote a 100,000 word epic fantasy story about dogs that could shoot lightening from their paws. I write bizarre things anyway, and when I first started reading authors like Carlton Mellick III and Cameron Pierce, I was shocked and excited that someone actually wanted to publish stories like the ones I was writing. All the people, like me, who are discovering that they aren’t the only ones doing it, are part of the reason the community is so enthusiastic and supportive. Bizarro has this huge cult appeal for a few reasons and that’s one of them. Another is, I think, a lot of bizarro publishers are putting out fiction that wouldn’t ever find a home on a major New York press because the work appeals to a different audience, an audience with little to no representation on large presses or in large movie studios. But there are hordes of them. And they live on earth, so they’re still consumers and they need something to buy too. Oh, and bizarro is like sex. There’s some kind of sex for everyone and if someone says they hate sex, chances are their experience is limited, they only have knowledge of a handful of positions, or their partner sucks and it’s time for a new one. If you don’t like battle unicorns and zombie doughnuts, maybe you’ll like the quiet, Lynchian realist prose of Jeremy Robert Johnson or the historical, gut wrenching emotion of Alan M. Clark. Perhaps you need some sort of life-altering revelation, the type you can only find if you fall in love with your house (as in Kevin L. Donihe’s amazing novel House of Houses). Maybe you’re looking for relationship advice, perhaps you just want titties. Whatever you want, some bizarro writer is writing it. You just have to look. And if after searching you still can’t find it, you can go ahead and create it yourself.

Mb: ​Though this is full of the ridiculous and bizarre, oddly enough I think it captures almost ​perfectly the way it feels to live in a culture that is very distinct and different from the one​you were raised in. Have you ever traveled or lived abroad? If so, how did it influence ​your writing?

KA: When I was growing up, my dad worked for a manufacturing company and traveled a ton. He’s been all over the western hemisphere and he’s an excellent storyteller. So, although my foreign travels are limited to the UK and Canada, I have a countless number of stories from my dad who, in Japan at least, was the quintessential uncomfortable businessman. He has stories about getting lost in the mountains on his way to Neuschwanstein Castle, being forced to eat duck feet in China, leaving a briefcase in a train station in Switzerland and running through the cars to jump off the train again onto the platform, eating at McDonald’s in Hong Kong, awkwardly declining paid companionship in Manila, dining with arms dealers at a private restaurant in the alps, having to feign being impressed by tiny blocks of flavorless tofu, walking the Champs Elysee, the Great Wall, the streets of Tokyo. So I spent my childhood listening to him talk about the feeling of being two heads taller than any other person for forty miles, the feeling of being somewhere that was older than all the people you’ve ever known combined, the feeling of art and people and cobblestones, and the feeling of total isolation that comes from traveling alone in a country that doesn’t know or particularly want you.

Mb: ​I loved all the giant monsters and sort of kitschy tech going on and the fact that a ​blundering obese guy accidentally almost crashes the whole thing down around him. And ​for such a lighthearted feeling novel, it’s pretty complex. What influenced the writing of ​this book?

KA: All the above stories of my dad’s business trips. Cameron and I came up with the idea of Japan separating from the earth and blasting into space and I wanted that book to exist, but I’ve never been to Japan, or anywhere like Japan. So almost everything I know is informed by my obsessive love of Miyazaki and Junji Ito, tons of Japanese movies and fiction. At first I felt totally unqualified to write anything, even a ludicrous fictional thing, that took place in Japan but I think I’m over it now. Manga, movies, and the “Economic History of Japan” page on Wikipedia are not the worst ways to research a place.

Mb: ​Before meeting you and Cameron at AWP earlier this year, I had almost no interaction ​with anything bizarro, but the more aware of it I become, the more I see what a ​wondrously beautiful community of weirdos it is. What is it that makes bizarro special?

KA: The fact that it’s a bunch of weirdos. It’s a bunch of weirdos with great, fearless imaginations and most of them with the motivation to produce the best possible consumable product, not just pieces of art for themselves. I love that one common goal of bizarro presses and authors is to create something that someone will want to read. It’s not just writing for the author’s own gratification.

When you spend any time at all being the only one of your kind, it can get very lonely. That’s what’s so amazing about being part of the bizarro scene. Finding people who want the same things you want might seem really impossible and hopeless. And I think lots of bizarro authors and fans are truly grateful for each other’s existence.

Read more from / about Kristen Alene here. Buy a copy of Japan Conquers the Galaxy here.