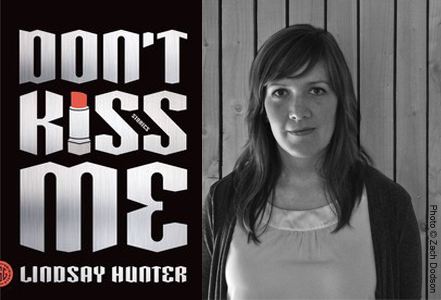 Lindsay Hunter is the author of the story collections Don’t Kiss Me (Farrar, Straus and Giroux) and Daddy’s (featherproof books). She lives in Chicago, where she is the co-founder and co-host of the flash fiction reading series Quickies!.

Just around the block a few times, my daddy says, and then I need you to help me out with something in the garage. I don’t listen to that last part. I go stuck clock. My face ain’t my face. I think how we’ll ride past that mailbox with the wood ducks and that flat dead cat in the road, and that house that got burned up by a drug addict. Wind in my hair, my hair that ain’t yarn.

Jean don’t have a daddy, so she don’t know. Cause how can you tell your own daddy no? You can’t. If you can I’m sorry for you.

Monkeybicycle: For lack of a better word, the stories in Don’t Kiss Me are a sort of raw realism. They’re dark and sad and often funny, but always thick with reality. What does realism give us that other kinds of writing can’t? Or, why stick to reality?

Lindsay Hunter: I think I break with reality a bit in some stories, but my main focus is always to show how these characters, no matter how ridiculous they seem on the surface, are actually very human. So the realism lies in the emotions they experience, or the things they do to escape those emotions. I love taking assumptions people might have about someone, or a certain stereotype, and stripping that away to reveal, at the core, all the same human parts as the next person.

Mb: Depressed and impoverished, ugly and lonely, these stories, I think, are ultimately about human connection and finding hope in a shit situation, often with a bit of humor to brighten the dark alleys. How does humor give us hope?

LH: Often, I find the moments I’m laughing while reading a book are the moments when I feel like the author truly nailed something. I think that’s all the reason you need to be a writer: that hope that what you wrote resonates in some way. I remember reading Infinite Jest when I was 19, chosen simply because I wanted to read a big, thick book, and coming upon the line “And who could not love that special and leonine roar of a public toilet?” and being bowled over. It cracked me up. I underlined it about a million times. And maybe that line didn’t mean shit to other readers, but it meant a lot to me. For a long time I had a lion’s head in my bathroom because of it. I laughed because it felt like someone was whispering directly into my ear, and any time you feel known, or seen, or like you’re less alone, you can’t help but feel hopeful.

I kissed a teacher once. It ain’t as bad as you think. It was in shop. He was showing me how to use the band saw and I was in the crook of his arm and we were pushing a two by four together and he had the windows open and there was a breeze and I just turned around and passed my tongue through his lips, easy as pie, his mouth tasted like menthol and something else, something like vinegar, something that wasn’t from food or nothing, something like maybe want. Want is bitter like that is what I mean. Right after I thought of the Cheetos I had in my bag, while he looked at me from behind his dinged up glasses, while his mouth worked like we was still at it, I just leaned back against the table and thought how I’d eat the Cheetos on the bus home, how I’d suck the orange from my fingers.

Mb: The voice is probably the most distinct thing about these stories. Though covered in grime, the sentences carry a bit of shine that helps us through. How important is the sentence to you? Which comes first for you, the character or the voice?

LH: The sentence is everything to me. The voice usually comes first and I just keep listening until the character comes into focus. I want to write stuff that catches me off guard just as much as I want to catch readers off guard. Words and imagery and turns of phrase are my obsessions. The fun part of writing for me is mashing words together, using cliches in new ways, crafting a sentence out of rubble. The story part of it is like an unintended consequence.

Mb: Most of these stories are very short, and many of them were previously published in literary journals, many of which typically only publish very short stories. How do you think internet magazines have changed the way we write fiction?

LH: I was just talking about this the other day. Even ten or twelve years ago, if you wanted a readership (and it was a small readership at that), you had to publish in these respected, staid journals. Print journals. Impossible to get into, it seemed. Online publishing has blasted that wide open. It’s so much cheaper and quicker to publish online, so journals can take more risks in who and what they choose to publish. That has been wonderful to see and be a part of. I don’t know that anything I wrote would have been accepted in those print journals! Too short, to weird maybe. Now the print journals are catching on, and they’re taking risks, too. It’s allowed writers to take risks, too, to keep upping the ante, because there are so many of us doing our own thing, and that is awesome.

Mb: Don’t Kiss Me has been lauded by many people in the literary community. How important is the reaction of your peers to your work? How much attention do you pay to reviews and the critical reception?

LH: I wish I could say that none of that matters, but it does. It matters a lot. While I feel like I stay true to what I want to write, I also feel that without a readership, there is no point. I am suspicious of anyone who says otherwise, unless you truly are writing for yourself and never asking anyone to read it. I want to be heard, and I want to listen. With Daddy’s and DON’T KISS ME, I was convinced they’d both be trashed, disregarded, hated even! But I still felt compelled to release them into that unknown maw. Because I believed in them, and they were mine, and I knew there was a chance that my own (sometimes crippling) self-doubt might be lying to me. It’s been such a relief, such a wonderful thing, to see both books received so well. Now I find myself crippled by the release of my novel next year. So weird how you can be utterly confident in your voice yet utterly terrified of rejection. It feels like I’m saying, “Psshh it don’t matter, because I did me OH SHIT LOVE ME, LOVE ME!”

Read more from / about Lindsay Hunter here. Buy a copy of Don’t Kiss Me here.