Welcome to another installment of If My Book, the Monkeybicycle feature in which authors compare their recently released books to weird things. This week Alex Poppe writes about her debut short story collection, Girl, World, out now from Laughing Fire Press. 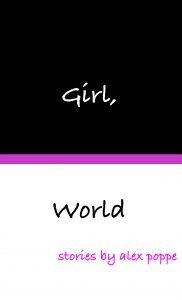 If Girl, World were a buffet spread, it would be a wedding feast buffet spread for a reception held in a rented hall at a nondenominational, culturally rich and ethnically diverse educational research university. The inter-racial happy couple would have requested donations be given to their favorite gender equality promoting charities in lieu of gifts. Most of the guests would comply except for the groom’s “Uncle” Charlie, who slips the new bride a fat envelope while grazing her ass with the back of his hand.

The guests from both the bride’s and groom’s friend lists would have the impossibly cool jobs often glorified in popular rom-coms or Weinstein-produced Oscar contenders. A number of photographers, journalists, ex-military personnel and aid workers on leave from assignments in Yemen and northern Iraq would get sloshed and then double eat.

Some of the guests would eat with their fingers.

If Girl, World were a wedding feast buffet spread, some dishes, although intricately spiced, would be light and zesty, devoured without pause while others would be rich, almost heavy, needing to be savored bite by bite over time. One or two would be out of this world. Everywhere on the table would be Color! Color! Color! as scents from Arabia jinned around the guests’ heads, igniting their noses.

If Girl, World were a wedding feast buffet spread, all the guests would finish their plates satisfied yet wanting more. The pristine white table cloths covering the rented card tables would be speckled with dolma rice and pomegranate seeds and Israeli couscous. Edging the table cloth like contrast trim, serving spoons would lie, abandoned.

After the naked wedding cake with its blood orange and persimmon layering was cut up, guests would politely decline a piece, opting to take their cuts home on fancy doilies in plain white cardboard boxes to have for breakfast.

If Girl, World were a wedding feast buffet spread, it would not be forgotten as the guests joined the bride and groom on the dance floor to enjoy the musical stylings of the rock-blues-folk band hired to play at the reception. (The bride and groom were lucky to have gotten them: they played a Black Lives Matter/Water Protectors rally last week). As the bride’s sister, with her blue hair and sleeved inner arms, rocked the base, the guests would drift back to the buffet spread for one last taste.

Alex Poppe is a teacher and creative instigator. A former actor/business consultant, she has taught in Poland, Turkey, Ukraine, Northern Iraq, the West Bank, Germany, and the United States. These places and their people inspire her work. Her fiction and non-fiction have appeared in magazines on both sides of the Atlantic, and she has been nominated for several prizes including the Pushcart Prize. When she is not being thrown from the back of food aid trucks or dining with pistol-packing Kurdish hit men, she writes. Follow her on Twitter at @sapoppe.

0 replies on “IF MY BOOK: Girl, World by Alex Poppe”