Welcome to another installment of If My Book, the Monkeybicycle feature in which authors shed light on their recently released books by comparing them to weird things. This week David W. Barbee writes about his latest novel, Jimbo Yojimbo, just published by Eraserhead Press. 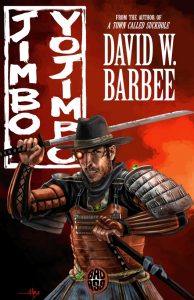 If Jimbo Yojimbo were an hors d’oeuvres, it would be an eel biscuit, sweet and spicy and slightly dangerous, as it wasn’t defanged. Eat the eel biscuit if you can. Avoid its gnashing teeth and whipping tail, and should you consume enough of it, you will find a strip of paper in its fluffy, doughy center. On that strip of paper is a fortune, and that fortune says “this meal will only become more deadly.”

If Jimbo Yojimbo were an appetizer, it would be the savory sesame log, soy-injected and slowly deep-fried for a hundred years. The honorable sesame log should be lifted over one’s head while running around the restaurant’s perimeter. Dogs will bite at your heels. Birds will swoop down to snatch bits of the gigantic log, which by now is causing your arms to weaken and shake. You may have the energy to eat of the soy log by the time you return to your table, but…

If Jimbo Yojimbo were a salad, it wouldn’t even be a little bit good for you. Its wrinkled leaves and bulbous tomatoes would pulse with a strange energy, and with the application of the teriyaki dressing, the radiation of such a salad simply would cause all taste buds to be irreparably damaged. Best to skip this course altogether. Who needs to be healthy, anyway?

If Jimbo Yojimbo were a main course, it would be the dreaded jambalaya squid, which will fight you like when Dae-Su ate that octopus in Oldboy. One needs courage to eat a meal like this, just as one needs courage to enter the delectable strangeness of Jimbo Yojimbo. Fight the jambalaya squid’s mighty tentacles and eat of its rubbery flesh, and know that your courage and strength will be rewarded with…

If Jimbo Yojimbo were a dessert, it would be the effervescent fudge dumpling, too decadent to be morally justified in this world or the next. It’s junk food for your junk body, and its consumption will surely turn your soul to junk, as well. But what do you have to lose? You’ve nearly been killed by every course of the menu so far, might as well die having a little fun. That’s what Jimbo his-own-self would do.

David W Barbee writes bizarro fables full of dark monsters and strange maniacs, influenced by a deranged childhood diet of cartoons, comic books, and cult movies. He is the author of Jimbo Yojimbo, Bacon Fried Bastard, The Night’s Neon Fangs, Thunderpussy, and the Wonderland award-nominated A Town Called Suckhole. He lives in the mangy wilderness of Georgia, next door to one of the world’s most polluting power plants.

0 replies on “IF MY BOOK: Jimbo Yojimbo, David W. Barbee”