Welcome to another installment of If My Book, the Monkeybicycle feature in which authors shed light on their recently released books by comparing them to weird things. This week Alex Behr writes about her debut story collection, Planet Grim, out now from 7.13 Books. 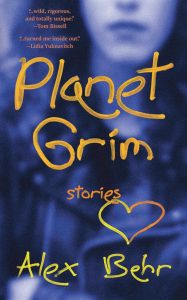 If Planet Grim were round and worn, it would be a toe ring in a rusted tin of needles, the needles long gone. No one mends anymore. But the tin also holds a lucky coin from the slot machines. The toe ring reminds you of a date with a drummer who wore all black except for the strands of threads across the hole in the knee of his tight jeans. The threads are dirty white and you wrap them around your finger. The drummer has a dead parakeet in his freezer because his roommate saved it for him to bury. It is still in the freezer in a plastic bag wrapped with rubber bands. The toe ring never fit you, because it wasn’t yours. You found it in the corner of the room when you were retrieving all your clothes.

If Planet Grim were something tossed into a witch’s potion it would not be the Jew’s liver, the goat’s bile, the Turk’s nose, the Tartar’s lips, the dragon scale, or the tiger’s entral. It would be a yew twig, snapped off a branch in a lunar eclipse. All children know twigs hold magic: and you, the child, have a glow / not a glower. You covet sticks for dark places. To bang against hard walls or fling into river currents. They are changelings.

If Planet Grim were an Instagram celebrity it would be Biggy Pop, Iggy Pop’s pet cockatoo. Iggy serenades to the white bird, which covers his bathrobed chest. It pecks hairs from Iggy’s face. For all revealed of Iggy onstage, the writhing, the crooning, the fuck-yous, this bird is a tender, funny surprise. If any character in Planet Grim could be that cockatoo for a day, the character would take the ultimate death: a match to the pages.

If Planet Grim were sentimental, it would be the envelope of stitches saved from when you banged your forehead against your brother’s during a game of hide and seek at dusk. Lip burst, you are driven to the hospital and get a whopping nine black stitches threaded through your skin. A mother’s love: inventing the Stitch Fairy to reward the daughter when she gets the stitches removed. You take the doctor’s instructions so earnestly that you never lick the stitches, even after post-church donuts. There is grace in trying to do the right thing, even if you are bullied at school. The stitches hold flakes of dead skin, your DNA. We are all fragile.

If Planet Grim were a survivor of a mass extinction, it would be the horseshoe crab. It lived when the continents formed one mass called Gondwana (best metal band name ever given to a geological formation—sorry, Uranus). The sea level was 600 meters higher than now, with huge glaciers north of what is now Africa. Yet half of all marine animal species died off when the warm, wet climate changed. The horseshoe crab, lowly, strange, has lived through the millennia. Books are transients made of borrowed words and dreams sifted into faulty cause and effect. The book will be forgotten. All books will be forgotten. So why the horseshoe crab? Something has to live besides cockroaches.

Alex Behr teaches fiction and creative nonfiction at Portland high schools through the Writers in the Schools program. Find out more at http://alexbehr.com or on Twitter at @alex__behr. Planet Grim contains stories, ephemera, and flash fiction, some of which have appeared in Word Riot, Watershed Review, Nailed, Portland Review, and elsewhere.

0 replies on “IF MY BOOK: Planet Grim by Alex Behr”