Douglas Kearney’s Patter is a book of various and inventive forms, the title of which plays on the Latin for father and on the sound of little feet, suggesting, too, a verbal ease that seems deliberately at odds with the book’s difficult subject matter. 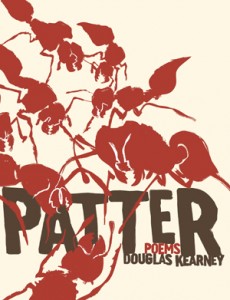 Douglas Kearney’s Patter is a book of various and inventive forms, the title of which plays on the Latin for father and on the sound of little feet, suggesting, too, a verbal ease that seems deliberately at odds with the book’s difficult subject matter. As Kearney struggles to express the private experiences of a couple trying to have a child, facing infertility and a traumatic miscarriage, he reaches for a series of unexpected structures that bring wit, rigor, and sometimes comedy to what could be the wordless pain of loss. As the forms change, so does the central figure—the expectant father, the new father, the father anxiously aware of all the ways to get it wrong.

Kearney’s poems play with forms both visual and generic, drawing on the tropes and techniques of other arts. One set of poems in Patter works a series of variations on two plain sentences, “I love your body” and “I hate it,” using words as graphic as well as semantic elements. Words grow or shrink on the page; lines tilt, collide, and fracture. These are among the most challenging poems of the book, and Kearney so often experiments with typography that they are difficult to quote. As a sequence, dispersed over the five sections of the book, they turn these two bare statements into complicated verbal and emotional architectures. For example, “Sonnet Done Red” reflects on how the rhetorical form of the Shakespearean sonnet, consisting of three brief “movements” followed by a concluding couplet, might try and fail to contain the complex feelings of attachment and betrayal the couple feel when they lose a pregnancy. If “I hate it” seems an unfair reaction to the woman’s body, Kearney is aware of this. In “Sentence Done Read” those two sentences explode into modifying fragments: “sometimes” and “you think” and “how can.”

The most touching sequence of poems in the book tries to recapture the shock and sadness of the couple’s miscarriage. As is typical of this book, Kearney turns to various models to find expression, and as perhaps is appropriate for poems that engage with very private experience, they turn particularly to different modes of performance. “The Miscarriage: A Silent Film” works through stark, iconic images: “BABY in hamper rushing downriver” cuts to “INT. CAR / a WIFE and HUSBAND” cuts to “LONG SHOT / waterfall, riverbed.” The poet also finds some moments of bitter humor in “The Miscarriage: A List of 10 Euphemisms for Use in Stage Banter” and “The Miscarriage: A Minstrel Show,” a stage conversation in which the “DAMN-NEAR DAM” accuses the “PATERFAMILISN’T” of eating watermelon in bed only to find that the stain the sheets means “Ise undid.”

As the miscarriage poems imagine the loss of a child as a series of performances, the poem “In the End, They Were Born on TV” casts the family as stars of a reality show and reflects on the different kinds of art or entertainment that might come from the same material. Though the parents-to-be play along with the brutal repetitions required of the show’s producers (“please tell me about the miscarriage / please tell me about the miscarriage”), this book refuses to be “good TV.” The fact that some of the poems are so fragmented that they are hard to piece together on the page is perhaps Kearney’s clearest refusal to provide easy entertainment.

Some poems also reflect on the forms or formulae we use in conversation, and Kearney points out that these are often lacking when it comes to men’s—and particularly black men’s—experience of pregnancy and parenthood. When the speaker of “The Miscarriage: A Bar Joke” tries to confide in another man about his wife’s miscarriage, the only response the man can come up with is to say “I know exactly how you feel, I just had my girl get an abortion.” The laughable equivalence here suggests how little everyday conversation gets at the nuances this would-be father’s experience. Similarly the surprise women register in “Daddies! On Playgrounds on Wednesdays” shows the poverty of our ideas about how parenthood should look. To these “lovely mothers,” fathers are people wearing “pants jammed with floorplans, hairy balls, and wallets,” not people who pack sippy cups and take their toddlers to the park on a weekday.

As the last quote only begins to suggest, Patter is a book obsessed with anatomy. As the couple undergoes various procedures to try to conceive, the would-be father begins to feel like his penis is a surgical implement, an impregnating device that might cause his partner pain instead of pleasure. Thus it’s a liberating and triumphant turn when, toward the end of the book, the young daughter, one of a pair of twins, claims “I have a penis” and the poet gets to write of her “wayward penis,” “gone on its hero’s wanderings.”

After the children are born, the father is freed of the reduction to pure biology, but entangled in a new set of problems, including worries about how the world will see and how it will treat his black children. In the long poem, “THANK YOU BUT PLEASE DON’T BUY MY CHILDREN CLOTHES WITH MONKEYS ON THEM” he reminds readers of a hateful old tale: “throughout history black babies get blue black bottoms till the stump of their circumcised tails black over.” With this history in mind, the purportedly benign cartoon monkeys “foul my babies clothes like blood, like shit.” In addition to the painful legacy of racism, Kearney also worries about more archetypal dangers in several poems that read like fairy tales stripped to their essence. “Run,” for example, dramatizes flight from an unspecified danger: “some body sprint / gingerly between dusk’s wan pants // run how through the telling carry someone / in someone’s sly mouth and done // at the story’s reddest place.”

Most broadly, Patter is a book about lineage. As he considers the personal and cultural legacy he gives to his children, Kearney also looks back on himself as a child. In the first poem of the book, “The Pool, 1988,” the young boy, uncertain in his body, is poised to dive into a new phase, the first hairs sprouting on his lip marking a turn to manhood; and in the final poem, Kearney thinks about the children who have come of the fertility treatments, and those still waiting for whatever will come next.

choosing worried you in its mouths:
lose them to strange names and houses,
board them ever in dear freezers,
or let them thaw and spoil?

those you’ve chosen doze under wool.
think of all the nights cool siblings
take them hand-in-hand and lead them
down the bleak rounds to your judgment.

This strange and tender moment is a lovely place to end the collection. The poems in Patter are often fragmented and repetitive, circling back on themselves, but this is one of a few places where Kearney finds a more relaxed syntax. The bittersweet gesture toward those unconceived children seems an appropriate coda to the worry and fear encountered on the way to fatherhood.

Stefanie Wortman’s first book of poems, In the Permanent Collection, was selected for the Vassar Miller Prize. Her poems and essays have appeared in the Boston Review, Yale Review, Southwest Review, Pleiades, and other journals. She teaches at Rhode Island College. Follow Stefanie on Twitter at @frettychervil.