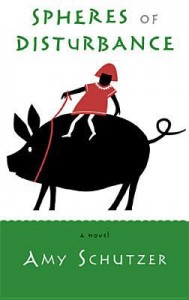 “Death is the final stroke of randomness, and we must wait for it, isn’t that what we’re told?” writes Amy Schutzer in Spheres of Disturbance, a sweetly affecting story of the last day of Helen’s life. The novel shifts between nine points of view, among them Helen’s daughter Sammy, an almost long-lost sister Rosie, Avery the poet, and a pregnant Vietnamese pot-bellied pig christened Charlotta. Most of the story unfolds at Avery’s garage sale, where seemingly the entire town makes an appearance and an all-woman band from the local lesbian farm collective provides the entertainment, usually musical.

Make no mistake—Spheres is by no means all sweetness and light. Helen is losing a battle with breast cancer that has metastasized to her bones and lungs. She has chosen this day to die. Our culture doesn’t know what to do with sickness, much less death. It’s as if ill health were a personal failing, a question of morality, of will. The “right to die” is a controversial and difficult topic; questions of personal autonomy always are. Helen’s daughter Sammy has spent the last couple of years in serious denial and at the beginning of this book believes that Helen should live for her, if for no other reason. No one is allowed to breathe the word “death” in Sammy’s presence, and this is damaging all her relationships. We follow along as Sammy makes the journey to a certain acceptance, if not peace.

You won’t read Spheres for plot and action. You will read Spheres for the diversity of characters and their completeness, for the complexity of relationships and community ties, for the sheer joy of skillful, precise, somehow intuitive language. Words are important in this book, both to the characters and to the author. Words are carefully chosen. For example, this passage comes from a scene between Sammy and Avery in which Sammy is flirting with taking down the wall that protects her from her mother’s imminent death:

She stands close. Not touching, just before touching. Knees close and thighs close and the buttons of their coats close. Sammy removes her hands from her pockets, from the box of cough drops and a flat green stone. The wind is in her palms and it is cold. Avery wishes those hands would rise up like leaves and land softly on her skin. But there is no hurrying Sammy. She unfolds her hands like flowers, each finger from the palm.

I was delighted by Schutzer’s powers of description, often pastoral but unexpectedly sharp. “Daylight seeps through the weeping willows with their breathy leaf curtains and strikes.” Charlotta the pig snorting along in the wake of Avery and Joe, discovering where they’ve been:

Dirt with oak leaves and linden, Cheerios, coffee grounds, flakes of alfalfa, and sweet, sweet apples. Joe. Where does he go? She doesn’t know. But where he goes has tickling grass, pine needles, dried-up dog doo, and something sweet…sweet but not apples.

Schutzer conveys a myriad of meanings in a single passage. “The man next to Rosie extends his hand. On his wrist hangs an oversized gold watch that includes several smaller dials within the larger blue face. It’s a watch that says the man wearing it will compare it to Joe’s, a Mickey Mouse Timex Darla gave him for his birthday, and draw conclusions.” There are also flashes of humor like this one: “…her mom is dying, though the word itself is so taboo that the doctors, the hospital, the American Cancer Society call it a battle instead. A war. There are cheerleaders…You can beat this, yes you can! Two, four, six, eight: only three more times to radiate.”

I was thoroughly charmed by this book. The setting is very specific—upstate New York in the mid-1980s. The atmosphere is a throwback to a time that persists in very few places, all granola, recycling, public radio, literacy, liberation, self-discovery and the social contract. Think Lauren Groff’s Arcadia. Spheres is Amy Schutzer’s second novel. Her first, Undertow, was a Lambda Literary Award finalist, a Violet Quill Award finalist, and won a Today’s Librarian “Best of 2000” Award. A poetry chapbook, Taking the Scarecrows Down, was published in 2011 by Finishing Line Press. As for Spheres of Disturbance, the highest praise I can offer is this: I yearn to know these people, this community. I want them to exist in the physical plane, not just in Schutzer’s mind, and now my own. I would gladly join their world.

0 replies on “Book Review: Spheres of Disturbance by Amy Schutzer”