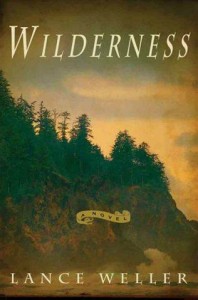 As you’re reading Wilderness, you may have to remind yourself that it’s Lance Weller’s debut. While not without its flaws – the prose blushes purple from time to time, the plot meanders in the middle before finding its footing – this is nonetheless an impressive historical novel. The atmosphere remains suitably gloomy from start to finish; the detail is believable but not overdone; the central character is clearly drawn and surprisingly sympathetic. And then there are the startling descriptions. At their best, Weller’s metaphors are so perfect that you’ll wonder how you haven’t seen the world that way before.

Wilderness tells the story of Abel Truman, a Civil War soldier who fights on the side of the losing Confederacy during the Battle of the Wilderness, but never truly buys into their worldview. When the opportunity comes to save himself and switch allegiances, Truman takes it almost without thinking. Ostensibly a Civil War novel, much of the book is actually a turn-of-the-century character study, as Abel Truman trudges from his ramshackle home on a Northwestern beach to the mountains inland. Along the way he runs afoul of a Haida Indian and a disfigured sadist, and it’s their wrangling that propels most of the narrative. The Civil War sections alternate with these ‘current’ chapters (set in 1899), fleshing out Truman’s life story with the characters and events that have made him, and damaged him.

Weller handles the alternating chapters with the confidence of a seasoned novelist, but unfortunately the Civil War flashbacks are never quite as engaging as the main narrative. That’s partly due to the ever-changing roll call of characters, most of which last a chapter or two before fading back into history. While the period detail will fascinate history buffs, these flashbacks are sometimes the speed bumps that slow the novel’s narrative drive. Many readers will find themselves yearning for a little more plot among the tangled relationships.

It’s in the 1899 chapters that Weller truly hits his stride, and their momentum is enough to carry us through the stickier patches. Abel Truman is a fascinating character, as gnarled and toughened as the trees that surround him, and when he’s allowed to take center stage his physical and ethical struggles remain satisfyingly complex. Truman is a man who has been forced into war through timing and circumstance, and has suffered more than his share of tragedy. His arm is wounded and withered, and will “never straighten from the angle in which it had healed.” His only child died at his own hands. And yet his desperation in fighting the truly evil men of this world – the Haida and his grotesque partner – becomes an epic struggle in which we feel that the fate of his own soul may hang in the balance. As Truman nears death he hangs tighter and tighter to his principles, and becomes an unlikely, but imposing, hero.

Much has already been written about Weller’s descriptive powers, and deservedly so. For a debutant his choice of simile and metaphor is often bold and eye-opening. All that undermines it is his rather scattershot approach, often throwing four or five similes (or metaphors) at us in a single paragraph – and when they come this thick and fast, not all of them stick. Describing an old molasses barrel as having “loose hoops that rattled like dull sabers in the wind” feels inspired, and, given the context, incredibly apt; “particles of violence that threaded invisibly through the dirty air like shuddering ectoplasm,” however, flirts worryingly with outright melodrama. The clumsier descriptive passages are all the more obvious alongside the stronger descriptions, and you can’t help feeling that a stricter edit might have drawn a leaner, more robust book to the surface.

Some of the period quirks – “drug” instead of “dragged”, “deadmen” rendered as a single word – feel forced too, but what pulls us through the story is Weller’s relentless attention to its tone and atmosphere. At times this becomes a little too relentless, as almost every character we stumble across has suffered at the hands of violent men, be it through assault, kidnapping, rape, or sexual mutilation – but that is the world Weller has chosen to portray, and he does so artfully and with moments of true compassion. The wilderness itself looms overhead throughout, and we are made vividly aware of the brutal lawlessness that grips the country both during and after the Civil War. Some places, it seems, were never meant to be civilized.

It’s in the last forty pages that this brooding atmosphere finally coalesces into the novel’s strongest sustained passage, as Truman comes face to face with the deeds of evil men among the frozen snowdrifts of the mountains. The narrative twists are both surprising and well executed, and the prose itself becomes tighter and more spartan as the plot finally springs forward in giant leaps. Weller’s achievements in this final chapter are truly astonishing in a debut, but more importantly they hint at the writer he might become in the future. There have already been comparisons with Cormac McCarthy, and for once these don’t sound like empty praise.

Maybe we shouldn’t expect so much from Wilderness. It’s sometimes easy to find flaws in a novel, especially a debut, and one of the reasons Weller’s clumsier passages stand out is the uniform excellence of the passages that surround them. We shouldn’t be too quick to criticize when there is so much to love and admire. But that closing chapter hints at what might have been, had the prose been a little leaner, and the action come a little quicker. Hopefully these lessons will be learned for his sophomore novel. Now there’s a book I’d like to read.