Welcome to another installment of If My Book, the Monkeybicycle feature in which authors shed light on their recently released books by comparing them to weird things. This week Joe Halstead writes about his debut novel, West Virginia, available from Unnamed Press. 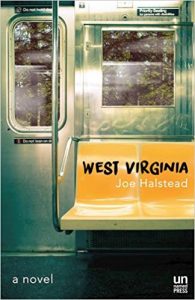 If my novel, West Virginia, were an actor, it would be Daniel Day-Lewis. When I write, I tend to do this “method writing” thing, like Daniel, where I’m sort of violently drowning myself in the character and the story. It’s hard to quantify and I don’t really understand it, but it’s a visceral feeling. When I’m writing something, I become very raw. A Green Day song could bring me to tears, that’s how emotional I am. And then I have to rebuild myself over time. My wife hates this because it does damage me, emotionally and psychologically, but it’s just how I work.

Anyway, I was really hungry to write something strange and edgy about where I came from, since it fucked me up, and, because of how I work, it was very painful to write West Virginia because I had to return to West Virginia. I literally thought, Well, I need to write a book about West Virginia, so I’m going to have to move back to West Virginia and upend our entire life we’ve built together in New York. We did this and lost three years of our lives and I almost didn’t make it out. West Virginia has the aura of one of those four-dimensional tentacle monsters. If you’re from there, you know what I’m talking about—there’s this unnerving psychological buzzing that you can’t shake out of your head. It’s everywhere, it’s in the leaves, in the people. While I was writing the novel, I went very deep into myself. At one point, I remember thinking, You are literally toxic. Look what you did, you destroyed everything. Who even cares about this?

Sure, this ends up being a great engine for storytelling, but when you’re walking around talking to yourself like the character (who, incidentally, is a carbon copy of who you were 5-6 years ago), everything from your past is suddenly projected outward again. It’s very damaging. You end up fighting a lot of old battles, scabs are ripped open, that sort of thing. It’s a deeply personal way of doing it, I guess, but I find it liberating because of the wounds.

Anyway, I just want you to know that this is not romantic or glamorous. I irreparably fucked my life up to write this book. Although I guess it ended up being the most rewarding thing ever, which is how I like to think Daniel Day-Lewis feels about all of this.

Joe Halstead is the author of the novel West Virginia (Unnamed Press, 2017). His work has appeared or is forthcoming in Five Quarterly, People Holding, Cheat River Review, Sundog Lit, The Stockholm Review, Sheepshead Review, and others. Follow him on Twitter at @JoeHalstead.

0 replies on “IF MY BOOK: West Virginia byJoe Halstead”