“The babysitter has stolen the Xanax,” begins “Queen of Hearts,” one of the short stories in Sara Lippmann’s debut collection, Doll Palace. The Xanax in question belongs to the narrator, a father who is faced with resolving the predicament at hand. 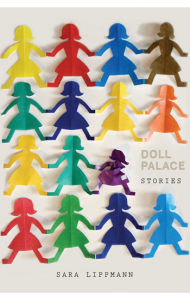 “The babysitter has stolen the Xanax,” begins “Queen of Hearts,” one of the short stories in Sara Lippmann’s debut collection, Doll Palace. The Xanax in question belongs to the narrator, a father who is faced with resolving the predicament at hand. “Should we call her parents?” asks his wife. But “Pam,” he points out, “is thirty years old.” And we watch as he comes slowly around to confronting Pam while taking full advantage of the opportunity to ponder her more closely than he might otherwise. “I feel the need to dig up shit,” he admits, and so he watches as she does things like drink water straight from the faucet, “as if this is what babysitters are born to do.” The story comes off with just the right combination of subtlety and consequence; the problem of Xanax theft gets resolved, but not until we have inhabited for just the right duration the intersection between these lives.

The most intriguing intersections, in this and Lippmann’s other stories, are between the lives of women. Although in “Queen of Hearts” we have a male narrator who pushes the action forward—his wife making it plain to him that this Xanax problem is his to solve— he is an intermediary between Pam and his wife, between whom stands the greatest dramatic charge. Similarly, the narrator of “Whipping Post” recounts the impromptu loss of her virginity at an Allman Brothers concert when she was fourteen. There is a man involved in this loss, but the narrator is plunged backward into the memory thanks to a backhanded comment made by her sister, who is in the car with her, and although we see them together just for a moment, we understand that the memory narrated through much of the story serves to inform their relationship to one another, that this is where the stress of the story falls.

Worrying Lippmann’s stories are the ways in which women are regarded, both by men and by other women. “Target Girl” concerns a girl whose father is a knife-thrower. He puts her on public display and places her simultaneously in mortal danger, as she is strapped into the target where he must do his best to throw around her body. Like her, many of Lippmann’s other female characters are in peril, whether they know it or not, and it is when her characters do know it that her work is at its most searing. “Tomorrowland” is a masterfully restrained piece in which a woman goes to Disneyland with her daughter and husband and, after a series of observations on her husband’s behavior and the park itself (“How may I grant your wish? The Fairy Godmother chirps”) concludes, “I worry my daughter will meet a nice man.”

The weaker of the stories tend to place their characters in trying situations and trust in the inertia of the setup to carry them through to the kind of insight reached elsewhere in the collection. In “All this Happiness,” two old friends are reunited as adults, one a wealthy woman, the other the clown she has hired for a child’s birthday party. As a premise, it is pregnant with possibilities, but dwells mostly on the awkward run-up to the party and flashes back to scenes with the characters as children without their reunion quite making these backward glimpses irresistible to the reader. Some of the stories seem to trust so much in their ingredients that not quite enough happens in the process of cooking them into narratives.

But there are twenty-three short stories in Doll Palace, and those I would file under Less Good than the Others are well in the minority. It is to Lippmann’s credit that at times throughout reading the book I felt like I was reading several different story collections, starting as it does with “Whipping Post” and straying into a story like “Houseboy,” about a former Israeli army officer spending his summer with a wealthy family in America. Doll Palace is a widely varied collection whose variations do not fail to intrigue.