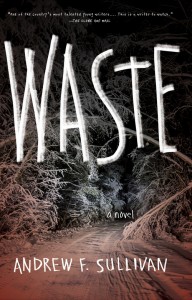 If Waste were a Trailer Park Boy, it would be Ricky:

As one of Canada’s greatest exports, Trailer Park Boys has taught the world there’s more to our nation than just maple syrup, hockey, and the sublime glory of bagged milk. Canada has its own broke-down, unwanted, unloved communities to share with the rest of the world. The show follows the exploits of Ricky, Julian and Bubbles as they try to get by one day at a time in the trailer park, committing petty crimes and hatching wild schemes for quick cash before landing in jail once again. These three offer viewers an endless cycle of rebirth—or if you’re looking for something less grand than that, the profound joy inherent to fucking up your life all over again.

I’d like to say Waste is more like a Julian, a wise, benevolent leader who relies a little too much on his rum and Coke to make it through the day. Always prepared with one scheme or another, Julian provides the centre for the show, the moral compass for the cast. He’s also the only one who actually lives in a trailer from the start. But this novel isn’t focused on trying to retain control—it’s about what happens when you make a mistake. It’s a reminder that things can’t be undone. This rules out Bubbles, too—fate is never kind to the shopping cart collector, but his heart is always true. His love for the natural world and the cats in the trailer park rule him out. We would all be so lucky to have a true friend like Bubbles in our life, but he is no Waste.

Ricky is Waste. Nobody wants to admit they ate nine cans of Ravioli, but Ricky will. Like the fumbling, bumbling, unstable characters in Waste, Ricky knows we can only truly learn things through a process of denial and error. He understands the small town drug economy of Canada is really just a corrupt system of supply and command. He knows that no matter what you do, worst case Ontario, you’re going to get caught. Ricky doesn’t care if he gets the words wrong—he knows you understand what he means. It doesn’t take rocket appliances to get your Grade 10.

Ricky is not a pessimist. He is an optometrist. He sees the future clearly, but he still can’t stop what’s coming. There is only so much a man can do when he’s living in his car.

Ricky knows that the brutal, horrifying things that can happen in a life might also just be a little funny. That finding them funny might be the best way to survive the everyday failure that has been pre-packaged as your existence. That chicken fingers, drinking and getting laid might be the only way to really deal with the shit you’ve been served on a platter. It’s peaches and cake, really, if you think about it. Like Waste, Ricky knows bad things are going to happen, whether you’re prepared for them or not. So if you’re crying, you may as well laugh.

Andrew F. Sullivan is from Oshawa, ON. His debut short story collection, All We Want is Everything (ARP Books, 2013) was one of The Globe and Mail’s Best Books of 2013. Sullivan no longer spends his days handling raw meat, boxes of liquor, or used video games. Waste is his first novel. Find out more at andrewfsullivan.com and follow him on Twitter at @afsulli.

0 replies on “IF MY BOOK: Andrew F. Sullivan”