Welcome to another installment of If My Book, the Monkeybicycle feature in which authors shed light on their recently released books by comparing them to weird things. This week, Jim Freed writes about The Illiterate, his new novel out now from Thought Catalog.


If my book, The Illiterate, were sex, drugs, and rock ’n’ roll 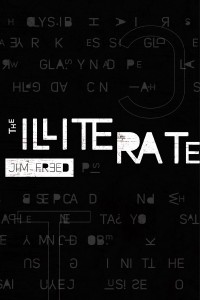 If my book, The Illiterate, were a drug it would definitely be LSD. The Illiterate would be the serious sort of acid one finds in New York, sold on little gumdrops that badass writers smuggle onto transcontinental flights to Los Angeles, where they go to Venice Beach and drop out steps away from the ocean. Like LSD, The Illiterate creeps and crawls into you and takes you on a strange adventure where everything you discover is at once miraculous and yet vaguely familiar. Some of the characters in The Illiterate smoke pot and drop Dexedrine, but no one drops acid. But that doesn’t mean it isn’t still there. LSD is everywhere in this book: From the first moment Jones discovers he can’t read the words in his newspaper to when he’s tricked into working as a sideshow freak in the end. If my book, The Illiterate, is on anything, it’s on acid.

If my book, The Illiterate, were a rock ’n’ roll song it would be something written by Bob Dylan between January 1965 and March 1966. In just 14 months, Dylan recorded three of his most influential albums: Bringing It All Back Home, Highway 61 Revisited, and Blonde on Blonde. He was only 23 years old when the first album came out, and 24 when the other two followed. Seven days before his 25th birthday someone called Dylan “Judas” at that very famous show in Manchester. My protagonist in The Illiterate is a little older. He’s just turned 30 and is starting to make a name for himself as a writer. But in a way—maybe in his heart—he’s still 24. He’s still just as impulsive and jumpy and insecure as he ever was. Much of Dylan’s music from this time conveys the raw sense of anxiety that I hoped to communicate through the pages of my novel. I licensed a few lines from Dylan’s “Ballad of a Thin Man” for my epigraph because I couldn’t think of anything more perfect to set the pace for my book (cue those soul-crushing piano chords in the opening). And, because the song is about a character named Mister Jones. My Jones is a very different Jones than the original Jones, but in a way I think they are kindred spirits.

Jim Freed is the author of the novels The Illiterate and The Unfulfilled. His writing has appeared in the New York Times, Monkeybicycle, H.O.W. Journal, SPACEY, Stereogum, on NPR (Neighborhood Public Radio) in conjunction with the 2008 Whitney Biennial, and elsewhere. He lives in New York City where he curates The Enclave Reading Series. For more info go to: www.james-freed.com, and follow him on Twitter at @jffreed.