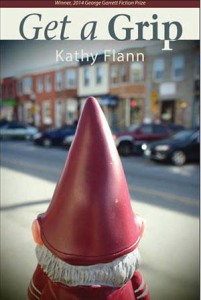 If Get a Grip were a flight attendant, it would be a flight attendant with a handlebar mustache and the name Snake monogrammed in cursive letters on his apron. He would have a five o’clock shadow, like he’d been out at a bar with red booths until pretty soon before the flight. But he’d still smile while you boarded and again later, while he poured your coffee, and he’d have straight white teeth. He’d laugh at your jokes, and when he made cartoon voices over the intercom, Porky Pig maybe, you’d feel like he did it for you. But Jesus, don’t fuck with him during the safety presentation – because he’ll say something, like, “Do you know what you are? You’re a bag of water. Do you know what happens when a bag of water hits a hard surface? Shut up and listen.”

If Get a Grip were a chain of atolls, it would be the Maldives. It would sit atop an underwater mountain range, and there would be channels of various sizes between them that would be used for navigation. It would be 99% comprised of sea. People would call it, fondly, a “string of pearls,” but none of those people would actually live there. People who did would be somewhat preoccupied with sea demons.

If Get a Grip were a posse, it would be only 50% effective at rounding up at-large suspects. It would get distracted with roasting marshmallows or staring at the sparks that popped above the fire or the far-away howl of Cody’s harmonica. Then again, there were those times when Amos would start complaining about his feet hurting. There was no end to it. Pursuing some guy through stubby shrubbery and cacti for miles seemed preferable to that. So it’d get back on those horses and ride.

If Get a Grip were a math problem it would be a^2 + b^2 = c^2. Although Pythagoras came up with an idea he thought was so cool that he swore his followers to secrecy, the theorem can be proven by anyone who wants to draw some bad-ass spherical triangles.

If Get a Grip were a motivational poster, the caption would say Don’t Quit Your Daydream, and there would be a color-enhanced picture of golf course or a cat or a waterfall or a lone tree or Abraham Lincoln or a wheat field or a pack of wolves or a hummingbird or Vince Lombardi. It should be noted that there would be absolutely no eagles. There would be no soaring, really.

If Get a Grip were a movie monster, it would be a nuclear mutant. It wouldn’t know that it had ingested fission products, nor that it was gigantic now, with melty skin and an extra eye or a baby head growing out of its shoulder. It would just want some friends. It would be like, “Hey, what’s up, you guys!” Only it would come out like, “Unnnnhhhh.” Still, it would end up rescuing some teen from the nuclear cooling pool, carrying that unconscious person to safety, saving him or her from becoming a mutant, too. He could have had a new companion if he stood by and did nothing. But how would he have lived with himself? That’s the kind of book that Get a Grip is, and now those kids are maybe starting to see that.

Kathy Flann, whose fiction has appeared in Shenandoah, The North American Review, The Michigan Quarterly Review, New Stories from the South, and other publications, teaches at Goucher College in Baltimore, where she lives with her husband, Howard. Her previous publications include a short story collection, Smoky Ordinary, and novella entitled Mad Dog. Find out more at www.kathyflann.com or follow her on Twitter @kathyflann.

0 replies on “IF MY BOOK: Kathy Flann”