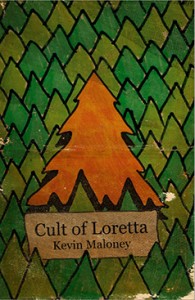 If Cult of Loretta were a shaman, it would take you into the desert, feed you peyote buttons, and turn into a raven.

If Cult of Loretta were a diorama, it would be a Converse shoebox full of condoms and bullets.

If Cult of Loretta were a painter, it would cut its ear off and give it to you, then paint a self-portrait from a mental institution, smoking a pipe and staring at you with lucid blue eyes.

If Cult of Loretta were a woman, she’d have a scar on her left elbow from where she fell off her Strawberry Shortcake tricycle as a child. Her freckles would surround the scar, but the scar itself would be totally white. Sometimes, after you made love, you’d run your finger over it and say, “What were you like when you were a girl?” She’d say, “I was precocious. I read War and Peace when I was nine. I liked to pretend I was Prince Andrei, wounded in the Battle of Austerlitz, lying on my back, staring up at the limitless blue sky.”

If Cult of Loretta were a black-and-white photograph, it would be the 2003 snapshot of Elliott Smith wearing a t-shirt that says, “I Love Metal.” He has the words KALI THE DESTROYER written on his arm in black Sharpie in honor of the Hindu goddess of time, change, power, and destruction. He looks impossibly sad, like he’s been taken apart and put back together incorrectly. All the pieces are there, but they’re in the wrong places, except for his eyes, which are beautiful.

If Cult of Loretta were your best friend, you’d sneak into the woods together and smoke pot out of an apple. You’d lie on your backs and look up at the bright green arms of the Douglas firs and promise each other to live life like the psychedelic miracle it is. Years later, you’d receive a message on MySpace that the police found his body in the Willamette River. You’d never find out what happened, only that he was dead.

If Cult of Loretta were a prayer, it would be that whatever Death is, it’s totally different than what it appears to be. And that when we meet it, we’ll go willingly. And that the beauty of the universe outweighs the darkness, or that at least the scales are even.

Kevin Maloney is the author of Cult of Loretta (Lazy Fascist Press, 2015). His stories have appeared in Hobart, PANK, and Vol. 1 Brooklyn. He lives in Portland, Oregon with his girlfriend and daughter. Find him at kevinmaloney.net or on Twitter at @kevinrmaloney.

0 replies on “If My Book: Kevin Maloney”