Welcome to another installment of If My Book, the Monkeybicycle feature in which authors shed light on their recently released books by comparing them to weird things. This week Sequoia Nagamatsu writes about his debut story collection, Where We Go When All We Were Is Gone, just published by Black Lawrence Press. 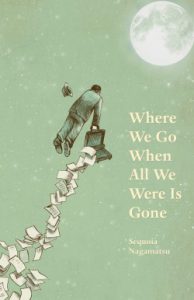 If Where We Go When All We Were Is Gone were a moment in a hotel room, it would be that split second on your 37th floor suite where you thought about what it would be like to run across the room and fling yourself off the balcony. Falling to the street below, you contemplate your laptop’s browser history and the series finale of the cooking reality show you’ll never get to see.

If Where We Go When All We Were Is Gone were a classroom roll call, it would be the kid with the long, difficult name who tells everyone they can call him John or Sarah (or something). Henceforth the title of my collection will be referred to as “my book”.

If my book were a toy, it would be a Gobot your parents got you after you asked them for a Transformer. Or it would be Soundwave having an existential crisis, figuring out how to remain relevant in an age of Spotify. 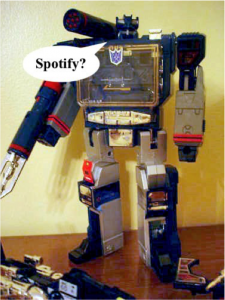 If my book were a weapon, it would be a nerf blaster outfitted with microscopic black holes. Suck it, you would say before shooting. But because that isn’t possible, the darts would be outfitted with sharpened nails instead. Just kidding, you would say. The blaster is replaced with foam darts except for one.

If my book were a date, it would be the two inches of air between your hand and your date’s shoulder who you aren’t sure if you can touch or not.

If my book were a Tibetan mandala that had taken months to complete, it would be raked away by a Roomba outfitted with an iPod speaker, blasting the guttural noises of Yoko Ono.

If my book were a cosplayer at Comi-con, it would be the most enthusiastic Kirby in the world. The costume would be made with a blown-up garbage bag, slowly filling with carbon dioxide during the costume contest.

If my book were an Über car ride, it would be a 1980 Toyota Celica Sunchaser Convertible driven by a sixty-eight-year-old retired Karate instructor named Toru. The GPS would fail and somehow, on your way to a concert, Toru would convince you that a childhood friend is the love of your life. When you open the Uber app again to rate the ride, you realize your driver should have been a white guy named Gene.

If my book were a piece of post-apocalyptic survival gear, it would be a sleeping bag made for two. There are zippered pockets for your powerless tablets and phones, containing the only photos of your lost family.

If my book were a musician, it would be Bjork, closing her eyes as she strums her belly harp in the music video for “Moon.” Or the drummer from the Talking Heads, Chris Frantz, in a wholesome turquoise polo shirt, soaking with sweat during a rendition of “Burning Down the House.”

Sequoia Nagamatsu (@SequoiaN) is the author of the Japanese folklore and pop-culture inspired story collection, Where We Go When All We Were Is Gone (Black Lawrence Press). His work has appeared in journals such as Conjunctions, Black Warrior Review, Tin House online, ZYZZYVA, and The Fairy Tale Review, among others. He is the managing editor of Psychopomp Magazine and will be joining the faculty of St. Olaf College in the fall of 2016. More info at http://sequoianagamatsu.net.

0 replies on “IF MY BOOK: Sequoia Nagamatsu”