Welcome to another installment of If My Book, the Monkeybicycle feature in which authors shed light on their recently released books by comparing them to weird things. This week Kim Magowan writes about her debut story collection, Undoing, just published by Moon City Press. 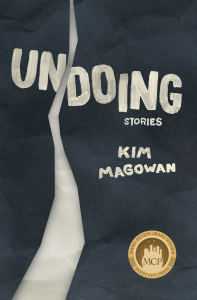 If Undoing were a rhetorical figure, she would wish she were a metaphor. She would long to have that insouciance, that pure, sculpted sense of self: “The moon IS a balloon.” But she would in fact be a simile. She can’t fully believe in assertions; she is tentative and full of doubt. “The moon is like a balloon” is the most she can commit to.

If Undoing were a baking item, she would be vanilla extract: she would smell so good you take a sip, and for hours afterward endure the bitter, chemical taste on your tongue.

If Undoing were a bible story, she would be the moment Christ intervenes in the stoning of the adulteress. But she wouldn’t be the famous part everyone knows, where Christ says, “Let he who has never sinned cast the first stone.” No, she would be the part before, where Christ bends down and writes with his finger on the ground. Everyone watches him, holding their stones, tapping their feet, because they have an execution to get on with. Even the adulteress watches him, protectively holding her flimsy robe over her mouth. My book would be the moment where Christ stalls for time.

If Undoing were a social faux pas, she would be chewing with one’s mouth open, because there is something she wants to say, right now, and who cares about concealing the messy interior.

If Undoing were visiting the dentist, she would claim to floss twice a week, because she knows that if she claimed to floss every day, she wouldn’t be believed, and this lie sounds plausible. The dentist would say, “Hmm.” That hmm would hang over my book’s head all day, like a cloud of skeptical bees.

If Undoing were on Gilligan’s Island, she would extract Mary Ann from the professor. She would ask why Mary Ann was wasting time with that bossy pedant. Maryann would point out that her options were limited, but my book would shake her head. She would gently pull Maryann’s hair loose from its tight ponytail. They would walk down the beach together, examining all the tidal pools, dangling sea urchins from their fingers.

If Undoing were one of the Seven Deadly Sins, she would be lust because, obviously. But she would wonder why, and under what misogynistic paradigm, lust is a sin. Isn’t lust just another word for desire, though judgmentally spun? Desire made deviant, just like manipulate is a judgmental spin on influence? She would complain about the concept of sin and its patriarchal underpinnings. Consequently, she would conclude, “Screw labels.” Then she’d make out with your book, while your book’s partner puts more coins in the parking meter.

Kim Magowan’s debut novel, The Light Source, is forthcoming from 7.13 Books. Her fiction has appeared in Atticus Review, Cleaver, The Gettysburg Review, Hobart, Moon City Review, New World Writing, Word Riot, and other journals. She lives in San Francisco and teaches in the Department of Literatures and Languages at Mills College. Follow her on Twitter at @kimmagowan.

0 replies on “IF MY BOOK: Undoing, Kim Magowan”