Welcome to another installment of If My Book, the Monkeybicycle feature in which authors shed light on their recently released books by comparing them to weird things. This week Kelly Luce writes about her debut novel, Pull Me Under, out now from Farrar, Straus and Giroux. 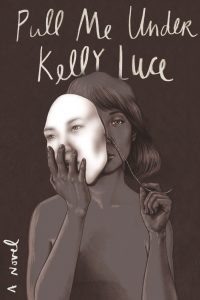 If Pull Me Under were the lovechild of a singer and a warlord, its mother and father, Maria Callas and Khal Drogo, would co-parent amicably despite all expectations to the contrary.

If Pull Me Under were a futuristic invention it would be a prism that scatters both light and spacetime.

If Pull Me Under were a cat it would be that cat that sneaks in your window in the late afternoon and curls up on your bed and stays the night if you’re lucky and when it stretches, it’s like a smooth long piece of gum with a soft vulnerable belly.

If Pull Me Under had a crush on you, it would make the first move.

If Pull Me Under did your hair, it would first take you into a strangely lit half-underground cave where the walls were made of bone fragments and ancient bottles and moth wings, and it would sit you on a rotating velvet throne and spin you around nine times and then, with the lightest of touches, slice.

If Pull Me Under were on your bar trivia team, it would pull out one or two unexpected clutch answers while drinking more than its share of the pitcher.

If Pull Me Under were a word from a fake language, it would be “zovtrimq,” which is Yümlæg for “intentionally forgetting that tomorrow will come.”

If Pull Me Under went to an Escape Room, it would get out no problem.

If Pull Me Under were a hipster fashion—just kidding. It wouldn’t be.

Kelly Luce is the author of Three Scenarios in Which Hana Sasaki Grows a Tail, which won Foreword Review’s 2013 Editor’s Choice Prize for Fiction. After graduating from Northwestern University with a degree in cognitive science, Luce moved to Japan, where she lived and worked for three years. She’s a Contributing Editor for Electric Literature and a 2016-17 fellow at Harvard’s Radcliffe Institute for Advanced Studies. Her debut novel, Pull Me Under, is out now from Farrar, Straus and Giroux. Find out more at kellyluce.com, or follow her on Twitter at @lucekel.

0 replies on “IF MY BOOK:Kelly Luce”