Welcome to another installment of If My Book, the Monkeybicycle feature in which authors shed light on their recently released books by comparing them to weird things. This week Vincent Chu writes about Like a Champion, his debut story collection just published by 7.13 Books. 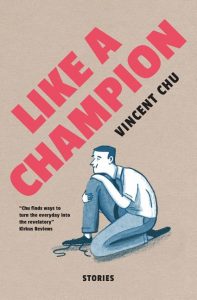 If Like a Champion were a Stranger Things moment, it would be when Nancy asks Dustin to dance at the Snow Ball.

If Like a Champion were a piece of furniture at IKEA, it would be a Billy bookcase, similar in dimension and color to the millions of other Billy bookcases in the world, but this one would be special. It would be in the half-off furniture graveyard before the check outs, a floor model built by a well-intentioned but sometimes incompetent employee, with a wobbly foot and frayed corner, a missing screw and crooked gap along the side. Still, you would take this special bookcase home and Billy would grow old with you and your family, providing comfort and opportunity for entertainment, quietly watching with gratitude from the corner near the window facing the shed in the backyard.

If Like a Champion were a wrestling finishing move, it would be the Stone Cold Stunner, simple, not always sensible, a little unrealistic at times, surprising as all hell, usually a desperate, try-anything, last-ditch effort when getting your ass kicked, best followed by a cold beer drunk in dramatic fashion.

If Like a Champion were a Tinder profile, you would swipe left, then weeks later, because of the small size of your search radius, come across it again and vaguely recognize it, and decide to look through its profile photos and at this moment you would think, well, it’s maybe not the sexiest car on the lot, but it’s got something, and since you’re already on your fourth margarita, you would think, Oh, what the hell, and swipe right this time and in the morning you would wake up to a really sweet message.

If Like a Champion were a character on The Office, it would be Kevin.

If Like a Champion were an email from your mom, it would oddly be in haiku form and explain why eating nuts and seeds are important for your diet, and it would mention the sale on Blue Diamond trail mix at Safeway. You would roll your eyes and think, I’m an adult, I know how to eat, but lying in bed that night you would also think, I have been feeling a bit sluggish and slow lately and you would reread the email over and over in your head, eventually falling asleep thinking, tomorrow I’ll buy trail mix.

If Like a Champion were a book, it would be a funny little addition to this universe of ours.

Vincent Chu was born in Oakland, California. His fiction has appeared in PANK Magazine, East Bay Review, Pithead Chapel, Cooper Street, Stockholm Review, Chicago Literati, WhiskeyPaper and elsewhere. He has been nominated for the Pushcart Prize and Sundress Publications Best of the Net. Like a Champion is his debut collection. Find him on Twitter at @herrchu.