The scar is dilated
and fear, the blood flame,
crowning.

You get used to the beginning
when you realize
whatever is living is infinite.

You should sleep in the street,

but you should rest
under the tongue’s shattering
glass dome.

There’s an interview with poets GC Waldrep and John Gallagher regarding their co-authored poetry collection Your Father On the Train of Ghosts along with several poems from the pair. “Rose As Red” contains some of my favorite lines: “It’s still not good enough. And you were always told/ all you had to do was to keep coming back to it.” The poem continues, “…the dead/are stumbling over the shopping/someone left out in the rain again.” The poem reveals itself to be about writing a book and what’s left out, “…the dead have covered themselves/in sticky notes.”

Mary Szybist’s “I Dream I am the Girl Toward Whom Columbus Rushes,” is a richly toned dirge. Robyn Art’s “Lives of the Floating Head” is a dense but enjoyable prose poem. It begins:

​All day I have been recording the failures of my body, hobbled as it is by corrosive ​longings, inadequate rain gear, its obtuse and variant hungers resembling nothing so ​much as the inedible parts of a chainsaw the wall I am not drunk enough to say resembles ​the unctuous whatnot glommed beneath the ocean’s colossal shadow.”

What really stands out about this issue is the diverse types of poems. Miller and his staff aren’t just focused on one style of poetry to the exclusivity of all others; Travis Mossotti’s “Dust” is a narrative poem about ecologists. Mark Seidl’s “Late January” is a confessional poem about a maudlin poem about loss and needing. There are love poems and loss poems, narrative, confessional, and surreal poems. It’s quite a range of work in such a small-sized journal.

One caveat: BR does charge a small reading fee for submissions, but also pays contributors $50/poem. 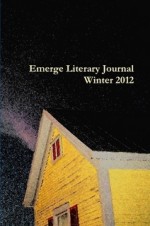 Emerge, as its name implies, purports to publish work by emerging writers (they also run reviews on their website). Looking through the table of contents, I can’t help but notice a poem by Howie Good, one of the most widely published but still largely unrecognized poets out there, so the journal must also want to give a helping hand to unrecognized writers as well.

This issue was laid out in distinct sections with the work arranged by genre. It opens with “Our Father” a Christian religious poem by Leslie Aguilar. This isn’t a constant theme in the collection, but a couple of these religious poems pop up throughout. Jenny Burkholder’s “Eve Dreaming” is an evocative reimagining of the love story.

Good’s poem, “Qwerty,” is a spring poem, practically a nature poem, which is a little surprising for Good, until you read it. “Whichever path I turn down,/there are birds & things,/the dubious signs of summer,” he says. “It’s a kind of moral statement,/so violent & so pointless.” Good concludes regarding this display of nature.

Kamden Hilliard’s “How To Tell If You’re Forgiven” uses a list form to meditate on love. Michael Dwayne Smith’s “Scruff” is an imagistic, meditative poem that stood out as possibly the most memorable in the issue:

She acquainted him with the sleepless
solitude of unquietness. A black bear
crept into the tent of their nights together
and ate the sunrise. Instead of the flower
that led him into bed, his nostrils flared with
wet fur and sated belches. He allowed the bear in
because he loved her. Because he no longer loved her.
Because he did not expect the bear to take to water,
paddling after his boat in a slough fog,
hungry for the back of his head.

KeyLyn Song’s “tiger balm and honeysuckle” is another imagistic, surreal meditative poem. It begins “i will place my mother in a honey jar,/my father in a basket lined with petals.” Jessica Cory’s “How I Explain to My Mother that She Should Not Eat the Sweet Tarts in the Freezer Because They’re Blotted with LSD” is, as one would think, humorous and inventive. Raina Fields’ “My Mother’s Body” is a beautiful meditation on the strength of the narrator’s mother. “Bless my mother’s body, all of the broken bones held together/by rod and nail, closer to bridge than flesh.” It begins. Naoko Fujimoto’s “The Beach” is, likewise, a beautiful poem about family and loss. It begins:

Grandmother packs dried
persimmons in a plastic
bag and walks to the beach. She writes
Father’s name on a wooden
stick when his body is buried
in the sand.

The prose tends to be quite brief and ranges from flash to structurally inventive pieces, rarely more than two pages long. It begins with Joe Baumann’s “Mr. Slayter’s Grand Illusions,” a strange list story. Dan Crawley’s “Queen C” is a humorous story about competing children. There is the odd forgettable love-lost/bar story clunking up the issue, though there are standouts like Thomas Kearnes’ list-story “The Reasons I Won’t Come Back for You.” The most memorable stories are so because of their style more than their content. So what does that mean? Send them some good fiction!