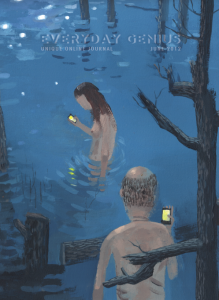 Based in Baltimore, Adam Robinson’s Everyday Genius is the literary journal arm of his Publishing Genius Press. Updated every weekday, the journal also tends to feature guest editors each month, writers like Michael Kimball, Mike Young, and others who’ve been published through the press (and aren’t named Mike). In the introduction, Robinson explains that he took the online journal to print for one issue simply to shake things up. This is the same journal, after all, that had Dzanc editor Matt Bell write a story, live, and let anyone edit it, and has had writers do week-long projects, or send postcards and post the responses, etc. If you’ve ever read Everyday Genius, seen Adam Robinson perform, or read his work, you can understand that when he says, in the introduction, “Everyday Genius is all about the changeup,” he’s being sincere. Modest, really.

And eclectic is the name of the game in this issue. It opens with color comics of a somewhat surreal nature (there are comics inside, as well) and moves to a long story by Jerry Snowbarger called “Winter on the Choppings” which is about the hard lives of migrant lumberjacks working through winter in what may have been a century ago. Considering the often unorthodox nature of Robinson’s own work, I expected…I don’t know what, but “Winter on the Choppings” is simply a straightforward, damned good story about a man who gets caught up in a situation he’s not responsible for, namely, when an ox is injured and has to be put down, he and his partner are blamed for slaughtering the bull in order to ‘beef up’ (sorry) their dinner. The partner, Muscle Head Moe, overreacts to the cook’s accusation, and takes an axe to the man’s head. The pair split, leaving the narrator on his own in the hard winter. But news travels fast in “the choppings” and the story seems to follow him wherever he goes, stirring up trouble. It’s a very well-written story, from the character’s names to the mise-en-scene of the setting. The fact that Robinson began with this solid story made me more eager to read this issue than I have been to read a literary journal in a long time.

Next, the issue moves to a few more current-feeling poets. Bryan Beck’s “Best Friends” is a poem about a narrator who has “this out-of-control windmill arm” (pg. 16, line 1) and is subsequently banished and tied “to this old maypole/ in a field like where a real windmill might be/so I couldn’t get too close to the kids.” (5-7). A strange old man (the titular ‘best friend’) often drops by and pontificates about the Civil War. The man sustains the narrator with honey, and even though the windmill-arm has caused him a lot of problems, the narrator treasures the familiarity of it. It’s an inventive and comical poem which manages to hint at meaning without slapping the reader in the face with it. Another of Beck’s poems, “The Nearly Designated Saints,” is a comical portrait of almost-ran’s living with their jealousy of the real saints. It’s such a familiar situation, it could be applied to many things.

“My Wife’s Car” by Matt Cook is a powerful yet simple poem about relationships. The narrator sees his wife’s car somewhere it shouldn’t be, and decides to get in and sit and wait for her. The ending seems obvious, but Cook manages to surprise us in a way that comments on the reader’s own preconceptions. Other highlights include an essay on Populist Poetry, three poems by recently deceased poet Chris Toll, and a picture of a cat. This is really just a random selection I’ve commented upon; there are so many good pieces in this collection, ranging from experimental structurally experimental to straightforward stories and poems and comics. I recognized a few names, but clearly the pieces were included because of quality, not hipness or names. I was quite impressed with this issue and look forward to reading more.