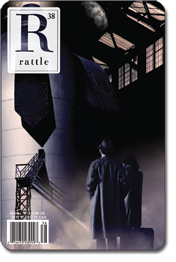 The thing that immediately stands out about the substantial offering of poetry in this print journal is the inclusion of quite a bit of formal poetry. Even more surprising, is the equally substantial section of speculative poetry, both balanced with the inclusion of the Rattle Poetry Prize winner and finalists (subscribers are asked to vote on the finalists to select a runner-up) and then two interviews. The reason many editors aren’t open to formal poetry is that it’s difficult to do well. Often, the form overshadows the content, but Mr. Fox has selected some phenomenal examples of formal poetry. One can only wonder how much schlock he had to wade through to get to these gems.

The issue opens with Ruth Awad’s “Inheritance,” which deals with war-torn Lebanon in 1976, “My father at fifteen walked the unguarded streets/having learned the cadence of rounds, measuring/the distance between safety and crossfire by sound” (lines 1-3). She vividly describes her father enjoying the freedom of being outside of his electricity-less apartment, complete with near-death experiences, but the real accomplishment of this poem isn’t that it brings to light how difficult this situation is, but that she manages to humanize the character of her father so well. He makes “war-games/with his shadow” (37). He’s glad that his older brother isn’t there, so he gets to go on errands, though the reader can only wonder where his older brother is, and if he’s still alive, even.

Megan Fernandes’ “The Flight To Sacramento” similarly humanizes a chance encounter with a returning war vet. He asks if she’d like to see some pictures and then shows her gruesome photos of dead people. “One trip to Afghanistan is like two//to Iraq. Ask anyone.” (lines 15-17) the young man says. “[H}e would talk of food and weather, so casu-/slly that I bit my lip.” (25-26). Again, the focus isn’t so much on the horrors this young man has seen, but on the narrator’s view of him. She catches herself judging, as many of us would, and struggles to view him with respect and dignity. It’s not so much an anti-war poem as an examination of ideology vs. compassion. “Do not condescend to/these men with your Sassoon,” the narrator scolds herself (30-31).

There are many powerful poems in this issue, and war seems to be a common theme. “Sledding” by Glenn Kletke describes a simple scene in besieged Leningrad in 1943. Anele Rubin’s “A Man On a Subway” is a nice break. She describes seeing a hipster wearing a New York Mental Institute shirt. For a moment, she wonders if it’s real, and then gets it. “Ha, ha, asshole,” she says when she realizes, “it’s supposed to be funny.” (lines 6, 5). It’s a nice commentary on the overuse of irony, but Rubin raises the poem to another level with her final lines, “He is smugly reading his newspaper./I am so tired of being sad.” (lines 7-8).

The Rattle Poetry Prize winner is Heidi Shuler’s “Trials of a Teenage Transvestite’s Single Mother.” It’s a vivid, well-crafted poem that describes a mother’s concern for her somewhat naïve (in her view) son. He enters into a situation she perceives as dangerous, and her concern is the emotional focal point of the poem. Of course, she is pleasantly surprised by life and by her son’s ability to take care of himself. Aside from this, I think one of the reasons Mr. Fox selected this poem is that Shuler took a topic that could so easily be melodramatic or overwrought but avoids these traps and simply describes a mother and son’s relationship. Shuler set herself a difficult task but accomplishes much with no missteps.

The Finalists are varied. One of the standouts is Norma Chapman’s “My 1930 Model A Ford,” which follows the narrator’s life-cycle through her experiences with this car. It’s a brief but well-packed poem.

The section on speculative poetry contains several diverse themes from soft sci-fi to humor to retelling of myths. “Rocket J. Squirrel Goes Alone To Couples Therapy” by Amorak Huey is a nice continuation of the Rocky and Bullwinkle characters. Deborah P. Kolodji’s “Basho After Cinderella” is another standout. Lots of familiar characters pop up in unusual situations. Wolverine, Achilles’ horse Xanthus. “What To Say When Your Baby Sister Tells You That She’s Just Become Engaged To Slorbglaugh, Emperor of the Slug People,” by Shangrila Willy, is a humorous take on the old story of meeting the new boyfriend. The issue concludes with interviews with Rhina P. Espaillat and Timothy Steele.

Rattle is one of the better literary journals I’ve read in a long time. Another thing that stands out about these poems is their depth and thematic diversity. The characters in these poems aren’t disgruntled 20-somethings for the first time encountering difficulties in life and surprised by them. I’d be surprised to see most of these poems in the majority of literary journals out there.