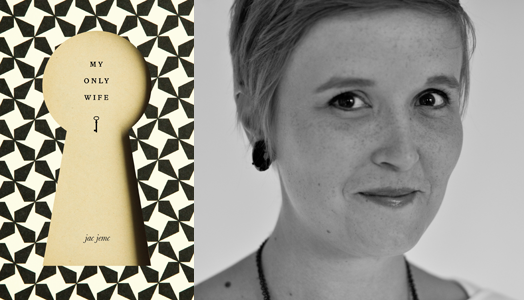 Jac Jemc lives in Chicago. Her novel, My Only Wife, was recently named a finalist for the PEN/Robert W. Bingham Prize for debut fiction. She is also the author of a collection of stories, A Different Bed Every Time, forthcoming from Dzanc in 2014 and a chapbook,These Strangers She’d Invited In (Greying Ghost Press). Jac is the poetry editor for decomP and a web fiction editor for Hobart.

My wife said, ‘I met a little boy who built sandcastles for a living today. He was young. Youth isn’t wasted on children. It’s inflicted on them, when they can’t tell what’s hit them.’

Monkeybicycle: I don’t know if I’ve ever read a novel quite so haunting as My Only Wife. The Wife is made so real and alive, but we’re left with this intense sense of loss rather than celebration. How did you create this atmosphere and tension?

Jac Jemc: Thank you! I love it when people use the word, “haunting.” I think a lot of it must have to do with the voice, which I used as my guide from the first draft to final product: The repetition, the uncertainty, the past tense that unravels a bit through the book. Sure, the husband is telling these stories that he cherishes having lived through with his wife, but he’s lost her, and in some sense, he’s lost his firm hold on who she was to him, so it’s loss compounded by someone realizing they’ve been had.

Mb: Each of the 41 chapters in My Only Wife are quite short and the narrative flows nonlinearly. For me, novel writing is almost like patchwork, where I have all these distinct segments written in no order, and then I need to build it into a novel. How did you go about writing this novel?

JJ: I wrote it as a patchwork, like you say, and then through the course of revisions, I decided what to reveal to the reader when. In the first draft I don’t think it came clear that the wife was gone until about halfway through the book, so that evolved. I thought a lot about memory and how disjointed it is, and how memory is a fiction of its own, because it revises for us, and it creates a narrative that might not be an accurate reflection of reality. So I tried to piece the story together from memory, rather than from real life events.

Mb: Unheard stories further haunt the novel. It creates a further tension that I think is common to most relationships. That being the cleft between the said and unsaid. The Wife often rails against explanation, or at least its vocalization. For me, this filled out their relationship, I think, rather than occluding its intricacies. How important is leaving things unsaid in fiction? and what, then, is the role of the reader?

JJ: I think the unsaid might be as important as, if not more important than, what’s said. When I’m reading, one of the most exciting feelings is figuring something out that hasn’t been explicitly stated. It means the writer has faith in me and draws me further into the narrative. In real life, we determine meaning by gathering clues, by filling in gaps, and I don’t think reading should be any different. So often, I think I’ve determined what’s happening in a situation, only to have it completely flipped on it’s head, and what is more satisfying and surprising? And it might not end there; it might flip and turn inside out 12 more times. Uncertainty and navigating that uncertainty: it’s the fuel of life.

‘We might be told where we’re going before we even know the place exists,’ she said, avoiding my eyes.

‘It’s true,’ I replied, ‘but if we never know what that place is, why bother thinking about it? Who needs a map when you’re already being carried there?’

Her fingers closed around mine. Our hands fell to the sand between us, grains clinging to her damp wrists. ‘I guess that would be the case if you never wanted to return.’ Her hand pulled away.

JJ: I honestly didn’t think actively about writing from a male perspective. The book started out as a poem repeating, “My wife…My wife…” so the narrator became a man, for me, but he doesn’t have to be really. I didn’t put any thought into making him seem ‘masculine.’

Mb: You’ve recently been nominated for a PEN/Robert W. Bingham, which is amazing and wholly deserved. How did you react to that announcement? How great has it felt to receive such positive reactions about your first novel?

JJ: I was floored when I heard the news! I received a text from my friend Amelia Gray, who was nominated for PEN/Faulkner earlier this year, saying, “Congrats!” I said, “Is this for me?” and she sent me the link to the New York Times. I was at work (at a software development company) and I started crying at my desk. That reaction might seem a bit overblown, but it was such a shock and I generally cry at just about anything. I couldn’t believe the judges had chosen this funny little book. It feels awesome to have people enjoy the book! Simple as that.

Purchase a copy of My Only Wife here, & read more from / about Jac Jemchere.