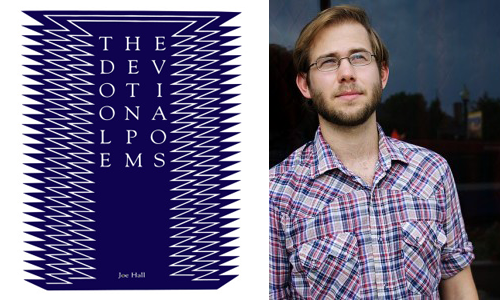 Joe Hall was born in the woods and is devoted to Cheryl. His poetry, fiction, essays, and reviews have appeared in Gulf Coast, HTMLGiant, Octopus, Hayden’s Ferry Review, Versal and elsewhere. Black Ocean Press published his first book of poems, Pigafetta Is My Wife, in 2010. With Chad Hardy he wrote The Container Store Vol. I (SpringGun 2012). His chapbook, Post Nativity, is forthcoming from Publishing Genius.

Monkeybicycle: The Devotional Poems is an intense collection, both vivid and shocking. The poems are densely packed with imagery that’s almost devoted to rewriting and reimagining itself. How important is imagery to you when it comes to a poem?

Joe Hall: No poem here started with a master image, but instead a feeling for surface texture, a relation of rough and soft, of distressed images, images that are being singed, burned through, pinholed. Images are important but not as objects like bricks with which to build new world but as vectors through which a structure of feeling is expressed and by structure of feeling, I mean a livid annihilating gravity, its character revealed via how it distorts what is trying to appear and hold itself.

Mb: There’s a great deal of juxtaposing the religious with the profane, the grotesque with the beautiful. Or, rather, combing the grotesque and beautiful into the same thing. Where does that juxtaposition or combination come from?

JH: I like to think of it as combining. There are times when I do do the masculine, juvenile thing of throwing crap at an idol, making a piss christ, but that’s just a starting point which I’d like to think the manuscript is self-conscious of. Combination is the point because pure iconoclasm or declamation is pointless, particularly given how old these icons are and how often they’ve been overturned. No one is shocked. If they are shocked, it is into being more rigidly the same. But where does the grotesquely beautiful come from? Rejecting ideals of beauty as symmetry (purity, balance)? Vallejo? Working in shitty milieus—the line of an industrial printing press, a shipping plant? What weathers and holds the mark of its weathering? Low percolating pain that is almost but never quite agony (pinched nerves, pains shooting through the legs of someone with six more hours left on your shift)? The sun’s age? I can’t say where poetry comes from exactly. But I know when it’s here.

Mb: The Abyss Has Nine Names And I Have Shown You Three is my favorite section of the collection, and it feels very different from the other sections, both in terms of form and content. Tell me about the writing of that section.

JH: Glad it’s a favorite. It was the most labor intensive. This section began with the others in a little, pocketable handsown book that I filled over the course of a year or so, not worrying about titles or divisions. In editing I had to find these divisions and fissures that would define the book. The material for “The Abyss” filled about 40 pages. It was a lot like the material in the poems “Trailer Park” and “Gasoline Chainsaw Jesus,” but the lines were shorter. I followed this signal to brevity over a couple of years, enacting the kind of changes that bring the “stone” of the poem alive and in which it eventually “dies”—the initial excerpting of it, selecting it as an object, removing it from itself in line and page breaks, giving it sensory organs and a life in which to die. In some ways I thought this section was traveling too far away from the other sections of the book–the others tend to be more effusive and less hermetic—but eventually realized this would help the rest of the book sprawl and drip.

Mb: The Devotional Poems plays a great deal with form and enjambment, and balances very long poems with very short ones. How does the form or even the line length inform the content of the poem? How important is the form when you’re beginning a poem?

JH: Line breaks are what make poetry poetry. It’s important for me to work against the neat, forward processes of thought, the possibilities of normative syntax and sentence constructions by using the line break to send the reader backward and forward at the same time, of creating units of sense and non-sense within the line which inhabits the sentence or contains multiple sentences. The period infects our body, the syntax we operate in can mediate our being, muscle, bone, and circulation. This is part of why enjambment plays such an important part in my poetics. Poems can propose new bodies. See Conrad, CA.

As for form in the larger sense, my first book, Pigafetta Is My Wife, has received forms like the sestina and pantoum and has an overall sequencing that could be described as pantoum-like. The Devotional Poems was not written in a meditative space. It was written in a place where things where normal structures were opening up or falling apart—relationships (opening up), school (over), my body (falling apart), a house I lived in (you could feel breezes blowing through it), the world (war)—the poems in long lines without stanza breaks are a result of that and the tremendous disaffected energy I had when I had time to write. Those long lines could carry that feeling, allow it, “inform” it.

So how important is form when I’m beginning a poem? Not very in this collection. I didn’t become self conscious of form until the middle of the process, placing these poems in a more process based space. This is important to me. Project based poems, conceptual poetry are all well and good and sometimes stellar, but they sometimes set the poet against the poems they didn’t know they could write or which it is necessary to write. In either instance—procedure or process based poetics–you have to be ready to abandon the scaffold which has gotten you writing or to leap into and inhabit a new structure as gospel. Though, I should say that once I had written poems like “Post Nativity” I did decide to write poems in couplets as a counterpoint. There is some fooling around with the sonnet somewhere in there. That’s not so interesting.

Mb: What is the relationship between poetry, violence, the grotesque, and the beautiful, the sacred?

JH: What a question! I am small and this is big, so the best I can do is present some notes.

1. If I were to say poetry can be violence and I could deliver a blow what would I want to deliver the blow to? The reader? The objects of the poem? The institution of poetry, the poetry museum? Am I, in this, assuming I could destroy or mark or even recalibrate the boundaries of such an institution? Nope. These are not things the poem is oriented toward. It is not in reference to these things.

2. The sacred begins in doubt and forgetting and mutating. Not clearing or purifying an external space to execute the internal, abstract plan, but applying a procedure of attention which in its presentness allows hidden objects to announce themselves out of (constituted by) the static of the known.

4. The other side of violence against is care for. Some questions I collected in and derived from one of Myung Mi Kim’s seminars:

Is there a violence in making care for the other a natural (absolute) state?

The grotesque is what we hesitate to care for. It is repulsive. We withdraw. We tend to care first for the beautiful. If we make the beautiful and the grotesque one in the same in a poem, can re-propose the questions of who and what we should be cared for?

5. Chuang Tzu on the violent man and doing: “men of ardor are regarded by the world as good, but their goodness doesn’t succeed in keeping them alive. So I don’t know whether their goodness is really good or not….The highest happiness, keeping alive—only inaction gets you close to this.”

6. Oscar Wilde: “When [the public] describe a work as grossly immoral, they mean that the artist has said or made a beautiful thing that is true.”

7. William Dean Howells on William Morris and doing: “We got back the pleasure of doing a thing beautifully, which was God’s primal blessing upon all his working children.”

8. Jackson MacLow on one his scores: “I intend that pieces such as this one should give full scope to the imagination, initiative, and sense of beauty of each of the performers.”

Read more from / about Joe Hall here. Buy a copy of The Devotional Poems here.