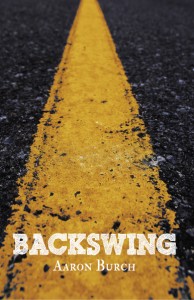 Backswing, a mix of Raymond Carver-esque slice-of-life and the dystopia of The Twilight Zone, is the debut full-length collection of fourteen short stories from Aaron Burch, editor of the literary journal Hobart. Each story is told from a male point of view—a twenty-first century man or boy trying to figure out what the hell is going on around here anyway, frantically chasing the next and the next and the next without realizing that, as the cliché goes: Life is not the destination, it’s the journey. Clichés usually become such for a reason, yes? The cover art of Backswing reminds me of Jim Hightower’s There’s Nothing In the Middle of the Road but Yellow Stripes and Dead Armadillos, and many of the characters in this collection are always practicing something—golf swings, sleight of hand, Tae Kwon Do—chasing perfection while simultaneously hugging that stripe in the middle of the road, bewildered and terrified of choosing. Decisions are hard; perfection is harder. You can’t get there from the middle of the road.

“Flesh and Blood” is the story of Ben, a pubescent boy uprooted from his home and moved halfway across the country when his father takes a new job. I alternately smiled and sniffled my way through this one, eloquent with pre-adolescent yearning to understand (everything, anything); to survive hormonal turmoil (for instance, is it gay of him to notice how ridiculously blue Bret Michaels’s eyes are?); to find your tribe and be recognized as a member—of belonging. I grinned and wished I could’ve given Ben a high-five (which would have mortified him—adults are so embarrassing) at the conclusion of his tale. Near the end of this collection we will meet Ben again as an adult in “The Neighbor” and, unfortunately, he seems to fit right in. An intriguing character, Ben has the potential to carry a novel.

The nameless protagonist of “Fire In the Sky” returns to his hometown to join his college roommates for the wedding of a friend. The reunion is awkward as they try to recreate the past, a (mis)remembered idyllic interlude of all-for-one camaraderie, while attempting to reconcile unrealized dreams and good intentions of eternal friendship that have fallen to the demands of jobs and families and the inertia many of us seem to think is required for responsibility. When the evening ends in tragedy they cannot, literally, run away fast enough.

I am less enamored of the philosophical allegories of “The Stain” and “The Apartment.” In the former, a small cult-like community, living in the equivalent of a sensory deprivation chamber, notices a stain on the road and spends the rest of the story discussing what it might signify. The stain was not there the last time they looked, at least they don’t think it was there, but then they can’t remember how long it’s been since they looked out that window. In “The Apartment,” a man wanders around his apartment building—it looks like his apartment building—trying to find his unit, but he has become so isolated and his life so bland with the constraints of conformity that he cannot distinguish his home from any of the others. Although not heavy-handed, the lessons of these parables are obvious and might have been more affecting if delivered in more accessible settings.

Where Burch really shines is in the stories that begin as Carver and gradually metamorphose, or suddenly fracture, into Lovecraft, often with biblical references. It’s quite the cocktail. There’s the poor man who, upon learning of his brother’s death, succumbs to madness in “Sacrifice” and does just that. Tyler in “Unzipped” is a reassuringly typical teenage boy, mouthing off to his mother and worrying about girls, except for the zipper that appears in his chest one morning.

Burch has a sly, sometimes acerbic humor and an affection for his quirky characters that manages never to slide into indulgence. The individuals populating these stories (bless their hearts) are everyday people dealing with common problems. The alchemy occurs when these ordinary people are rendered extraordinary by deceptively simple yet evocative language that leaves you startled and then comforted, as if Burch has suddenly popped up with a mirror, showing us ourselves. We identify with these characters because they are us. The supposed banality of average lives is no less profound simply because it happens every day. Backswing is a distinctive and accomplished debut, and I look forward to the next collection.

Michelle Newby, reviewer and wanderer, blogs as TexasBookLover. A former hedge funds and private equity paralegal, she is attempting to “make amends.” Michelle is at work on a collection of short fiction. Find her on Twitter @TXBookLover.