Perhaps the greatest magic trick performed in Not on Fire, Only Dying, the elegant and gritty debut from Susan Rukeyser, is its improbable blend of elegance and grit. Literary fiction disguised as a crime novel—or is it the other way around?—Rukeyser’s New Yorkers are not the irony-addicted denizens of coffee shops and gentrified walk-ups who have peopled so much contemporary literature set in the city. 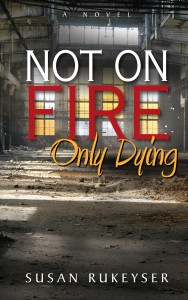 Perhaps the greatest magic trick performed in Not on Fire, Only Dying, the elegant and gritty debut from Susan Rukeyser, is its improbable blend of elegance and grit. Literary fiction disguised as a crime novel—or is it the other way around?—Rukeyser’s New Yorkers are not the irony-addicted denizens of coffee shops and gentrified walk-ups who have peopled so much contemporary literature set in the city. Instead, “towering elms gild the morning’s hard light… several empty storefronts with for lease signs fading in the windows…. There’s a pawn shop. The windows of Lenny’s Swap Shop display trays of tarnished jewelry.” These characters are drug dealers and the mentally troubled, living in a New York more familiar to viewers of classic 1970s cinema, and Rukeyser’s dignified depiction of their lives doesn’t so much blend beauty and darkness as insist they are two sides of the same tarnished, priceless coin.

By the time the novel opens, Lola’s infant son is missing. Marco, the drug dealer of Romani descent from whose point of view the novel unfolds, vows to help her find him, and the stage is set for a would-be traditional kidnapping thriller. And while this novel contains enough dramatic thrills to satisfy those looking for them, nothing is spoiled to reveal the novel’s earliest twist: Lola might or might not even have an infant child.

If the possible crime—and the mystery of whether or not a crime took place—drives the novel forward, much of the tension comes from the history Marco shares with Lola. Once upon a time not so long ago, before Marco did some time in prison, the two were romantically involved, and Marco’s desire to help find Lola’s missing child is very much fueled by his desire to find a future with his former love. Even Marco’s attraction to Lola is more melancholy than nostalgic, if no less romantic for its complexity. “She looks like someone who’s surviving despite herself,” he thinks. “Marco is hungry for every part of her, even the ugly parts, even the dark ones, or perhaps especially them. They’re the parts he might fix. They’re the only reason he has a second chance with her.”

Lola does have at least three children besides the possibly missing infant son. All of them stay with her mentally stable sister. But such is the troubled, impoverished life Lola leads that even her sister can’t say for sure if she had ever been pregnant with or given birth to the fourth, possibly kidnapped child. Keeping the mystery mysterious is Lola’s wholly detestable ex-boyfriend, who muddies the truth as well as the plot. His presence provides more traditional tension in a lean story that moves inexorably forward even as its characters constantly look to their own past. Although the search for Lola’s child is handled effectively, Rukeyser’s concerns are more emotional than procedural. The prolonged search for answers allows space for meditations on second chances and reinvention, not only Marco’s but the changing and unchanging sections of the Hudson Valley and East Village he canvasses.

Marco might be a drug dealer, but the reader isn’t asked to question his morality the way viewers of Breaking Bad or Weeds are asked to adjust their expectations of good and bad, black and white. Marco is a drug dealer because some people in this world, many people in this world, make a living selling drugs, the way many people scan bar codes in check-out lines or sweep steps in old office buildings. Drug dealers are treated no differently from any other hard-working profession, another working class occupation in which “life keeps scrolling forward, like a conveyer belt through a factory, but always in one direction, always forward. If you hop off to catch your breath, sooner or later you have to climb back on. Might as well find a way for the forward motion to be okay.”

Late in the novel, Marco tells his friend, Mary, the well-drawn owner of a salvage shop, “I’ve never understood when people say they don’t believe in regret. As if refusing to acknowledge something makes it disappear… My Failure’s real, whether I believe in it or not.” In no significant way does the terrain of Not on Fire, Only dying resemble that of classic crime novels of Chandler or Hammet, but in the world-weary, eyes-wide-open attitude of Marco, he is every bit the Philip Marlowe or Sam Spade. Marco is a criminal by definition, but by example he is never less than heroic. It would spoil much to say what Marco finds in his search for Lola’s son, whether a happy ending or the tragedies to which these characters have grown so accustomed in their young lives. People want happy endings, Lola tells Marco at one point, but he believes otherwise, and the reader of smart, complex fiction is inclined to take his side. “Not all people,” he insists. “Some of us just want real ones.”

James Tate Hill’s debut novel, Academy Gothic, won the Nilsen Prize for a First Novel and was recently published by Southeast Missouri State University Press. He is Fiction and Book Reviews Editor for Monkeybicycle. For one week in 2015, Joyce Carol Oates followed him on Twitter. www.jamestatehill.com @jamestatehill

0 replies on “BOOK REVIEW: Not on Fire, Only Dying by Susan Rukeyser”