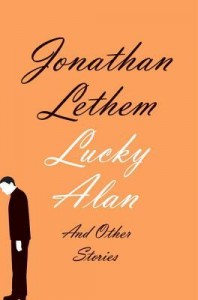 Nor could I compete with his latter incarnations—the bespectacled and bemused working man in plaid of Chronic City, for example, or the grinning, self-assured Cheshire cat of The Ecstasy of Influence.

But the latest incarnation of Lethem is right up my alley. He’s going gray. He’s looking away from the camera with a countenance of mild concern. His baseball cap is barely broken in. His double chin is on display for all the world to see, and I couldn’t be happier.

What Lethem’s latest author photo signals, at least to my eyes, is that he’s reached a point in his career where he isn’t worried about appearances. In terms of the distinction between “White Elephant Art” and “Termite Art” that he borrows from the late painter and writer Manny Farber in The Ecstasy of Influence, the image suggests that he’s emerging from the cocoon of his white elephant suit to fully embrace his termite self.

Or something along those lines.

To an extent, the stories collected in Lucky Alan bear this theory out—which itself is quite a feat considering the mainstream publications in which the majority of them first appeared.
Yes, as one might expect from The New Yorker fiction, a good chunk of these stories focus on the quirky obsessions of oddball characters with idiosyncratic names. And, yes, the climaxes in these stories tend to involve epiphanies that reinforce, justify—or at least rationalize—the quirky obsessions of the oddball characters in one way or another.

But something else is also happening in these stories. What Lethem is doing throughout the collection is giving us the life within the life, taking us behind the scenes, giving us the private moments that make the quirks and obsessions make sense. Or, to use the termite analogy, he’s burrowing deep into his characters’ hearts and, in Manny Farber’s words, leaving nothing in his path “other than the signs of eager, industrious, unkempt activity.” Take, for example, “Pending Vegan,” in which a man named Paul Espeseth goes off his meds shortly before taking his children on a trip to SeaWorld. As Espeseth, who has secretly renamed himself Pending Vegan, worries over such first-world concerns as the cognitive dissonance his daughters will experience as meat-eating animal lovers, Lethem gives us a glimpse into the inner workings of the character’s mind:

As a boy he’d endured back-seat travel without the help of movies. Instead he’d directed his gaze out the family station wagon’s windows, past a zillion miles of the Chippewa National Forest, the U.P., and southern portions of Ontario and Manitoba. As a ten-year-old, in his ecology phase, he’d invented a time-killing game, known, like his new name, only to himself. In this fantasy, Espeseth’s parents’ car featured a long invisible knife, like the wing of a plane, which could extend or retract from the side of the station wagon according to his mental instructions. He and his parents were only pretending to be nobodies, the sole Protestant family from the suburb nicknamed St. Jewish Park. In truth, they were emissaries from another world, sent to reclaim the landscape from the intrusions of the human species. He alone was orchestrating the blade, which shot out to lop off each electrical pole and road sign, and retracted to spare as many trees as possible in the effort. Houses, and other cars, it sliced through mercilessly. His fantasy even included an alibi-providing element of delay, which explained both his not getting to see the glorious destruction he’d wreaked and why no human authority was able to locate and neutralize the mysterious force that tore through his surroundings: the sliced objects fell apart five minutes after his family’s car passed by. By this method, the earth would be returned to the flora and fauna.

In this instance, it’s almost impossible not to fall in love with both the young Espeseth and Lethem’s skill at capturing the preteen imagination. Who among us – at least those of us who grew up in an age before smartphones, iPads, and backseat video screens – didn’t invent such games to pass the time? And what bizarre ethical predilections did these games reveal about us?

By giving us this unguarded but not entirely innocent moment from Espeseth’s childhood, Lethem gives us a window into our own souls and challenges us to trace the origins of our quirky predispositions.

In addition to burrowing deep into his characters’ histories and psyches, Lethem also embodies the termite mystique in this collection by continuing to take risks with form. Most notably, “Their Back Pages” reads like an amalgam of comic book scripts, journal entries, and free-form poems as it recounts the efforts of several B-list characters to survive on a deserted island, and “The Dreaming Jaw, The Salivating Ear” needs to be read backward (more or less) in order to make narrative sense. Of course, neither of these pieces appeared in The New Yorker, but their experimental nature makes one wonder where Lethem would be as a writer had he stuck solely to the termite’s path throughout his career.

The answer, of course, is that nobody would care because hardly anybody would have heard of him. But now that he’s established a name for himself, he can afford to experiment, can afford to dig deep, can afford to show off his gray hair and double chin. To put it bluntly, he can just have fun with writing and not worry about what the world thinks—which is a good thing for the rest of us. As we all grow older together, it’s nice to know that some of us are still capable of eager, industrious, unkempt activity.

Marc Schuster is the author of The Grievers (Permanent Press, 2012) and The Singular Exploits of Wonder Mom and Party Girl (Permanent Press, 2011). He teaches writing and American Literature at Montgomery County Community College in Blue Bell, Pennsylvania. Find him on the web at http://www.marcschuster.com, and on Twitter at @marc_schuster.