Not For Nothing by Stephen Graham Jones is a new hardboiled detective novel written in second person. Many know the second person format from those appliance manuals none of us ever read, but my introduction to the second person narrative came from Stephen King’s classic post-apoplectic thriller, The Stand. 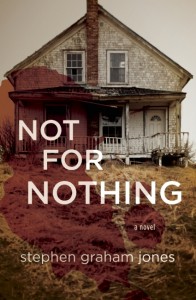 Not For Nothing by Stephen Graham Jones is a new hardboiled detective novel written in second person. Many know the second person format from those appliance manuals none of us ever read, but my introduction to the second person narrative came from Stephen King’s classic post-apoplectic thriller, The Stand. One of the characters in that novel, a villain, writes short stories in second person. In my mind, this equated second person with evil, nasty things. I was further entrenched in this view by science fiction author Chris McKitterick using it with regard to a terrible, horribly written character in Transcendence. This was how I came to Not for Nothing, a little angry/upset/irrational about the format, but I persevered on.

I was also hesitant about the hardboiled detective novel. Dashiell Hammett did it masterfully, and Raymond Chandler fortified it, and Ross Macdonald came around and perfected it. Much like the detective’s fedora, though, it seems as though no one should be hitting up this genre, much less second person. However, for some reason, it works. It works really well, like cat videos or dog shaming.

It starts with the introduction of you; you are now Nick Bruiseman, and you are thrown directly into a small, dusty Texas town. You walk around the corner, sucking barbeque sauce from under your fingernails (an action with which anyone from barbeque country is innately familiar). Eyeing the girlfriend from your senior year, you (Nick) attempt to make your ridiculous situation more acceptable than it really is. You are a disgraced homicide detective returning to your hometown to nurse wounds/live out your days in peace/slowly drink yourself to death like your father is doing half a mile away. This situation is strangely familiar to my own, me the reviewer, though I never did tale photos of a judge and found myself banned from the city. I have returned to the area where I grew up just to live a quiet life.

Bruiseman and I (I and I?) also share the fairly high intelligence, although Bruiseman’s has been affected from the alcohol, eating holes in his brain. The second person narrative works well here. When the differences between myself and Bruiseman became far greater, the mystery took over and carried me to the end of the book.

What starts as a simple tailing job quickly escalates. The ex-girlfriend Gwen Gates (nee Tracy) hires Bruiseman to find her stalker, but within hours Gwen’s husband arrives and also hires Bruiseman, to find out if Gwen is having an affair. Bruiseman assumed that the stalker and lover are one and the same and sets out to solve both cases. While on the job, Bruiseman makes a series of questionable moves, but everything can be justified. When someone turns up dead, Bruiseman is the prime suspect.

The hardboiled bit comes into play with regards to Gwen Gates (nee Tracy). Gwen will always be Gwen Tracy to Bruiseman, the first real love with the ability to get exactly what she wants when she wants it.
Gwen’s hand beats you by little enough that your skin rubs hers. On the edge of the table, she rips the check in two, gives half to you.

”It was made out to you anyway,” you say.

But Bruiseman knows better than to fall for all the looks and unnecessary physical contact. This is reality. Reality where Bruiseman is banned from a county for taking a side gig without doing proper homework. Reality where Gwen has most likely framed Bruiseman for murder—now what kind of lover does that? Bruiseman may have been naïve once, but no more. That has been solved by the justice system and the cure to all that ails, alcohol. Maybe the alcohol is used to calm the nightmares from the shooting several years previous. Whatever the reason, alcohol is ever-present here.

You as Bruiseman are more charming than you dare to admit and manage to get out of jail by offering another plausible suspect. You then set out to solve the murder, clear your name, and hopefully put to bed all the bad decisions that have followed you from your detective days.

Allison Puderbaugh is an active member of PBR Book Club, where they read everything thoroughly . . . while drinking. You can follow her on twitter at @Knsstxs.

0 replies on “Book Review: Not for Nothing by Stephen Graham Jones”