Atticus Books has politely and perhaps reasonably requested that all reviews of The Shimmering Go-Between avoid spoilers. The trouble with this request is that the content of Lee Klein’s debut novel is so bizarre 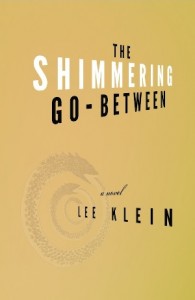 Atticus Books has politely and perhaps reasonably requested that all reviews of The Shimmering Go-Between avoid spoilers. The trouble with this request is that the content of Lee Klein’s debut novel is so bizarre—so novel, for lack of a better word—that it’s almost impossible to discuss without spoiling any of the surprises in store for first-time readers. All I can reveal if I’m to remain in compliance with the publisher’s request is that the narrative follows a lonely woman named Dolores who pines, in her own way, for a widower named Wilson. That they both work in publishing is probably safe to mention as well, but I’m skirting spoiler territory when I mention that each has a unique talent—one for what might be described as spontaneous generation and the other for demonstrating what the mythical Ouroboros is really swallowing. Beyond that, I can say no more about the plot of this wildly imaginative novel.

I can, however, mention the author’s prowess at bringing characters to life within the strange parameters he’s created. Despite—or perhaps because of—their gifts, Dolores and Wilson live proverbial lives of quiet desperation. Set partially at the dawn of the internet age, the novel finds both characters living alone yet attempting to reach out to the wider world through technology, each with extremely limited results. Yet their inner lives both literally and metaphorically churn with mystery and intrigue. That they eventually come together in a quasi-romantic liaison is practically inevitable, but the results are anything but predictable. I’ll run the risk of spoilage by allowing that they eventually involve the mayor of Trenton, New Jersey, and a very large pile of junk.

The publicity materials that came with my copy of The Shimmering Go-Between liken the novel to many things: a set of Russian nesting dolls, the fiction of George Saunders, and the films of Charlie Kaufman. While these analogues certainly work, I also imagine the novel’s dream logic will especially appeal to fans of bizarro fiction—particularly works like Andersen Prunty’s The Beard (in which the protagonist, among other things, watches helplessly as a herd of elephants abduct his grandfather, eats a psychotropic sandwich, rides a bus driven by a silent figure whose head resembles an onion, and moves to Ohio to grow a beard) and Josh Myers’s Feast of Oblivion (in which a self-styled halibut expert visits an underground fortress and accidentally uncovers a plot to destroy the universe).

A penchant for the bizarre, or at least the quirky, is nothing new for Atticus Books. Their past titles have reimagined Jesus Christ as a twentieth-century kid from the Badlands (Nazareth, North Dakota by Tommy Zurhellen), interrogated consumer culture through the eyes of a burnt-out salesman on a whale hunt (The Snow Whale by John Minichillo), and followed a young American on a quest to learn the truth about her legendary Nazi-era filmmaker grandfather (Kino by Jürgen Fauth). Yet with The Shimmering Go-Between, Atticus breaks strange new ground, crossing from the relative realism of previous works to a distinctly surreal landscape ruled less by the head than the heart.

Marc Schuster is the author of The Grievers (Permanent Press, 2012) and The Singular Exploits of Wonder Mom and Party Girl (Permanent Press, 2011). He teaches writing and American Literature at Montgomery County Community College in Blue Bell, Pennsylvania. Find him at http://www.marcschuster.com and on Twitter at @marc_schuster.

0 replies on “Book Review: The Shimmering Go-Between by Lee Klein”