Welcome to another installment of If My Book, the Monkeybicycle feature in which authors shed light on their recently released books by comparing them to weird things. This week Susan Rukeyser writes about her new story collection, Swap / Meet, out now from Space Cowboy Books. 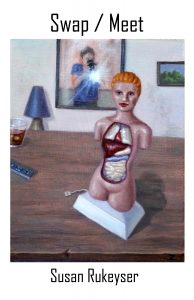 If Swap / Meet were an eyeshadow palette, it would be 60% off at Marshall’s, the only one like it on a shelf of shower gels and bath bombs. It would be tossed impulsively into a cart by a woman on her way to check out. “Maybe I can resell it,” she’d think. She had a small booth at the flea market, which was better than a table.

If Swap / Meet were a discounted eyeshadow palette, it would have nine colors inside, rectangles aligned like piano keys:

If Swap / Meet were a discounted eyeshadow palette with nine colors, or stories, it would be listed for sale on a local, online marketplace for $20 OBO. The caption would read: “Eye doctor visit copay was $20 but anything helps, thank youuu.” The picture would show the palette open, balanced on the edge of a pedestal sink. The listing would explain that the palette fell to the bathroom floor shortly after this picture was taken, and some of the shadows were damaged. Nothing terrible, and she could have lied, but she told the truth because Swap / Meet is honest when possible.

If Swap / Meet were a discounted, slightly damaged eyeshadow palette listed for sale online, the seller would disclose that she’d tried a few of the colors—okay, most. She’d twirled her favorite eyeshadow brush into each rectangle. (The sponge applicator that came with the palette is useless but included.) Her eyes were usually bloodshot, because she smoked pot and rarely slept, but this night was worse. The whites of her eyes nearly matched the rectangle of Hairless Guinea-Pig Pink. She’d thought it was allergies. She only used the palette once—three times, tops.

If Swap / Meet were a used, possibly contagious, slightly damaged eyeshadow palette for sale online, it would be grateful just to be considered. It would know it makes you a little uncomfortable. It would not apologize. It would crack a joke to ease the tension. It would have something to say. It would keep on telling its stories, even from the bottom of a dumpster, although it would hope that you’d recycle.

Susan Rukeyser’s debut novel, Not On Fire, Only Dying (Twisted Road Publications, 2015), was an SPD Fiction Bestseller and a finalist for the 2016 Lascaux Fiction Prize for published books. Her flash fiction chapbook, Swap / Meet (Space Cowboy Books, 2018) was conceived, written, and delivered within nine months of her move to the Mojave. Susan has published a variety of work in journals including Hippocampus Magazine, Atticus Review, WhiskeyPaper, Women Writers, Women’s Books, and Monkeybicycle. Find out more at susanrukeyser.com or follow her on Twitter at @susanrukeyser.

0 replies on “IF MY BOOK: Swap / Meet, Susan Rukeyser”