Welcome to another installment of If My Book, the Monkeybicycle feature in which authors shed light on their recently released books by comparing them to weird things. This week Heather Rounds writes about She Named Him Michael, her new novella just published by Ink Press Books. 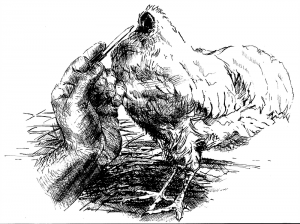 If She Named Him Michael were your eyes, those eyes wouldn’t get far down the night roads. Especially out of the city when met with the winding patterns or the fading broken white lines. No, it wouldn’t be age, those hapless eyes would have always been bad at night travels. No, it wouldn’t be their preference, those delicate retinas would pine to take it all in for as long as they were open to you.

If She Named Him Michael were your gallbladder it would have gotten carved out many ills ago and you really wouldn’t recall that small, sludgy pouch now because, life.

If She Named Him Michael were your heart it would sometimes soar like a drone under the control of an unsupervised child. Just as susceptible to climbing over the winds as to a crash on some side street. Either way, easily broken.

If She Named Him Michael were your liver it would know when to remind you of its vitality. It would remain a quiet and passive gland only until you filled it up one too many times with the toxins you lean on and love and believe in so long as you can keep up the memory making.

Heather Rounds is the author of a novel, There, which won the Emergency Press International Book Award and was published in 2013. Her poetry and short works of fiction have appeared in numerous publications, including PANK, The Baltimore Review, Poet Lore, Big Lucks, Smokelong Quarterly, and Atticus Review. Her latest book, She Named Him Michael, is out now from Ink Press. Find out more at heatherrounds.com or follow her on Twitter at @lttlthngsbgplcs.

0 replies on “IF MY BOOK: She Named Him Michael, Heather Rounds”