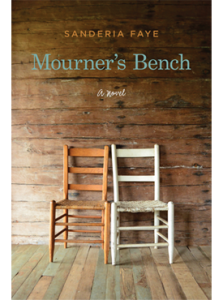 If my book, Mourner’s Bench, were champagne, it would be Veuve Clicquot La Grande Dame. She would reside in Reims, a city in the Champagne-Ardenne region of France, eighty miles east-northeast of Paris. She’d grow on the hillside where the soil is shallow and the sun’s rays are supreme. Fall would be her favorite season because she knows only the finest, sweetest grapes would be used to make La Grande Dame. After harvest, her Madame would sip champagne from a crystal flute at breakfast, and at lunch with strawberries. Later, she’d ride into Paris with Madame in her yellow Cadillac with a symbol of an anchor on the hood, the Christian symbol for hope and rigor. Speeding along the highway to Paris, she’d see a shooting star cross the midnight sky, signaling a fun night of sipping champagne, dancing to the sounds of Stevie Wonder and falling in love. Madame would pop her cork as she entered the café. She’d be both practical and superstitious.

If Mourner’s Bench were a drink, she would be a bottle of strawberry soda. She’d be splashed across a young girls teeth and tongue until they turned red. Before the girl finished the last drop, she’d pour it on her index finger and paint her lips with the soda. She’d be tall, lanky with a long neck, and a passion for patent leather black shoes. She’d be happy when the girl ran up to her grandmother and stuck out her tongue with a huge smile for her to see the red stains on her teeth, and then pursed her lips as if she were wearing the finest lipstick. She’d cry laughing along with the girl and her grandmother at the sight of her red mouth. She’d cry for real waiting on the girl’s grandmother to scrape together a dime for another bottle of strawberry soda from the corner store.

If Mourner’s Bench were a jigsaw puzzle, it would be a 1000 piece country landscape. Mourner’s Bench opens with the disruption of a rural town, which is like tearing away the cellophane, pulling off the cardboard top and emptying a box of puzzle pieces onto the table with several of them falling to the floor. It is up to the protagonist, eight-year-old Sarah Jones, to maneuver her way through the terrain as she puts the puzzle together. The corners are sharp, and she can’t get them to fit, including the piece that is her colorful mama hidden under the leg of the table.

If Mourner’s Bench were a butterfly, it would be a Monarch. There are four generations of the Jones family living together in the novel, Mourner’s Bench like the four generations of the life cycle of the Monarch. They are all different, they are all beautiful and they are all stubborn like the eastern North American monarch that is known for its perseverance during an annual migration from the United States to Mexico.

Sanderia Faye is the author of a novel, Mourner’s Bench, published by the University of Arkansas Press in 2015. She is co-founder and fellow at Kimbilio Center for Fiction. A recipient of several awards, residencies, and fellowships, she is currently a PhD candidate in the School of Arts and Humanities at the University of Texas at Dallas. Faye received an MFA in Creative Writing from Arizona State University and was an instructor for The United States Navy-Navy College Program for Afloat College Education (NCPACE). Find out more at sanderiafaye.com, or follow her on Twitter @sanderiafaye.

0 replies on “IF MY BOOK: Sanderia Faye”