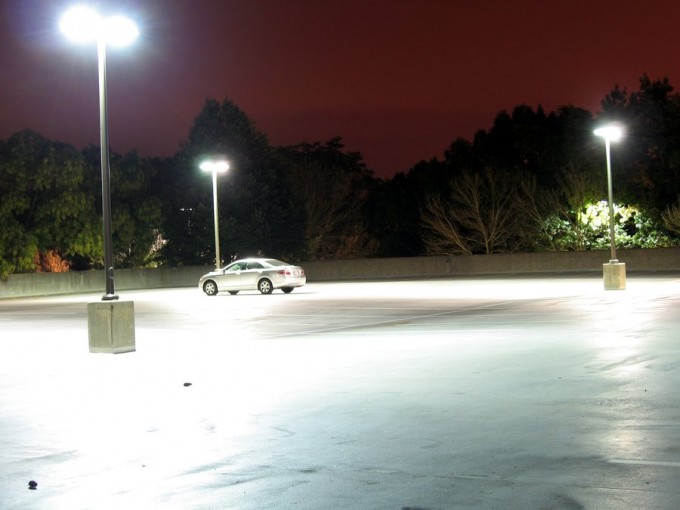 For the next three days we’re proud to serialize a new short story from the great Kit Reed. Below is part one. Check back tomorrow for the next installment.

“I dunno, Mel, who do you think we should get to end this?”

I love Melanie, but she doesn’t always get it—unless she is pretending. I jerk my head at The Sanctum, the closed door, the man behind it drooling over our secret places, that lascivious toad. “Him, you idiot. Him.”

We both know who but she says “Oooh, Dumbo,” because she loves the way it sounds. That overbearing, lecherous piece of crap Chester Underworth, whose X-ray eyes strip you down to your Bikini wax, a.k.a. the boss. Correction. The default boss because Cecil Underworth is in bad shape and the job fell into the hands of his only son. Mel tries, “Sexual harassment suit?”

“I said end this, not drag it out.” It’s so late that we’re the only two still here, and it won’t matter how late we stay. Every night Dumbo outwaits us, so it’s a wind sprint across the parking lot to the safety of our cars night after night after night; we could show you bruises on certain soft places as proof. We have to put up with it, for Dumbo is our boss. Fortunately, his precious open office plan, wherein our cubicles are open on three sides so Our Leader can see up our skirts, does not include his. The Sanctum has teak walls chest-high. Two-ply frosted glass covers the rest. He’s in there early and late, probably trolling the Internets for incriminating particles—our emails, text messages and, for God’s sake, subversive tweets, hoping to find scantily clad selfies of me and Mel and Sophia on the web, and she’s old.

“What if we torch the place?” Mel and I are colluding outside the women’s bathroom—naked babe silhouette stenciled on the pink door that Dumbo special-ordered, with frilly letters reading: GIRLZ. Like that puts us in our place. If he emerges in the middle of this discussion, we make like we’re either coming out or going in.

I say through my teeth. “Keep it down.”

She says brightly, “Or we could quit.”

“Take care of the problem.” she is poised. “Senski.”

Thus she drives the stake into Dumbo’s heart. Even her tone creeps me out. Everybody knows about Senski, but nobody knows what he’s famous for. All we know are his watchwords, I am very good at what I do, the problem being that nobody will tell you exactly what he does. I blow off the idea with a what-the-fuck shrug. “Can’t afford him.”

“But we have to do something or UnderworthOverwrite goes belly up. Dumbo’s bleeding us dry.” The perks alone! High-end trips to exotic spots, “company” cars that only he can drive, on-call limo with salaried chauffeur to take him home whenever he’s too drunk to drive with his hooker du jour. Plus high performance bonuses. Every Thanksgiving, New Year’s, Presidents’ Weekend, on every known and made-up holiday, Dumbo writes a big fat check to the most valued employee. You guessed it: Him.

“Sophia says we’re running in the red and it’s only a matter of time. If the company goes under, we’re kaput.”

“In this economy, we’re screwed.” Face it, there are no other jobs out there for engravers like us. UnderworthOverwrite is the last of its kind. Only high rollers can afford U.O.’s services. We incise your calling cards/wedding invitations/letterheads into precious metals with this diamond stylus that other companies abandoned years ago. We’ve been replaced by machines. Only UnderworthOverwrite creates hand-engraved designer one-offs like ours, a unique design on hand-crafted plates that, after we’ve produced your order on creamy stock finer than silk and stronger than steel, will self-destruct. You can’t get that just anywhere. Without these jobs, we’re shit out of luck. Gulp. “So this is it.”

And if Mel and I are alone in the office at this hour while Dumbo lurks, he has his reasons. And ours? Long hours, no overtime, or Edgar starts training the first popsy smart enough to learn and maybe a little more willing to let Dumbo… oh, never mind.

Oh, yes we do despise the man. His father used to come into the office every day, back when he could still walk. Cecil Underworth was a real craftsman, stopped by your bench to admire your work. He built this business, and kept designing until it got so bad that he couldn’t see. He used to run his hand over the design you were working on, reading it with his fingertips. Then he’d say “Lovely, lovely,” and back away with the smile that signified a performance bonus on your next check.

Then Chester Underworth got home from his trip around the world on the company dime. “He brought special chocolates from Thailand and we had a celebration,” nice old Cecil told us the next morning. But all the excitement wore him him out and he had to go home. It was the last time he came in. When he got better he called three lawyers to his bedside amd turned the company over to Dumbo—signed and sealed the papers and lapsed into a cathartic state.

Now he spends his days strapped in a wicker wheelchair, according to Sophia after she went to the house with the company books. The felon Chester hired to take care of him parks in the one patch of sunlight in that cavernous old house and comes back when it gets dark. Then he doses poor Cecil with something, and puts him back to bed.

OK, this is weird. Until Dumbo came back with those special chocolates, Cecil was in charge.

Now Chester is. No, Mr. Underworth, I will not call you Chet. In addition to being an incompetent and a failed murderer vacuuming up money like an aardvark on an anthill, he’s a lecherous fuck, riding herd on an office filled with women because we’re cheaper than men and—groan—easier to replace—a fact Dumbo uses to push us around.

It is what it is, which means that most days I get done after midnight if I’m lucky, and if I can’t outrun Dumbo he’ll cop another squeeze, spraying whiskey and gross endearments at me on the eternal footrace to the car.

The rest, we will have to do later. That, at least is agreed.

“Ladies,” Dumbo smarms, while his eyes strip us like a TSA scanner. “Let’s knock off early and go somewhere quiet for some nice, get-acquainted drinks.” Evil grin. “Us three.”

I forget what we blurted but I remember how fast we ran—it’s easy to elude Dumbo if you can race the elevator down five flights of stairs. We were in our cars and out of there before he crunched through the front hedge, lumbering our way.

Kit Reed’s next novel, Where (Tor), will appear in the summer of 2015. Her most recent books are The Story Until Now: A Great Big Book of Stories (Wesleyan University Press), a Shirley Jackson nominee, and Son of Destruction (Severn House). Recent novels include The Baby Merchant, Enclave, and Thinner Than Thou, winner of a YALA Alex Award, all from Tor. A Guggenheim fellow and an early recipient of an international literary grant from the Abraham Woursell Foundation, she is Resident Writer at Wesleyan University.Find her on Twitter at @TheRealKitReed.