Free State Review is a brand new print journal from Annapolis, Maryland, featuring a painting by Pulitzer Prize winning poet Mark Strand on the cover. Burdett, in his introduction, says something that immediately grabbed me, regarding the contributors: “Every contributor centers his or her life around action—doing something—engaging the world, scratching surfaces.” What quickly becomes apparent when reading through this issue is that the editors remained true to this idea; these are poems and stories in which life is lived. Philosophical ideas are raised and explored, but they are always tied to real-life situations. I won’t say that the poems are all narrative, but many of them all, and most, if not all, have narrative elements.

The issue then opens with poems by Paul Hostovsky, a talented poet whose work I encountered when I edited Ghoti Magazine a few years ago. Hostovsky’s poems are that rarest of thing in a poem: funny. He monologues about a library science degree and his son who wants to be an inventor like “Thomas Lava Edison.” Nikia S. Leopold’s “The Miracle” is a poignant love poem. Julianna Spallholz’ flash story, “Strangers,” captures the 20-something outsider ethos well: “When I was pregnant with our baby and we did not know where else to go, we moved to a nice town. The nice town was full of nice people and nice houses and nice people and nice houses. We were safe there. We were safe when we had our baby.” Spallholz uses repetition throughout the story to emphasize the fears of her characters, but also to expose the emptiness of their lives; they are safe and stable, but they are still outsiders. This safe world they’re building is foreign to them.

Mary Ellen Redmond’s poem, “Tiny Afflictions” is a powerful dirge, “Forgive me,” she says in the final lines, “I have been asleep for half my life.” A handful of poems are included, posthumously, by Chris Toll. Sue Ellen Thompsons’ “Falling On Ice” is a pitch-perfect poem about fragility and beauty:

You’re looking
at the geese that rise

in a consensus from the river so nearby
and for a moment you, too,

She continues, meditating on the beauty of this scene, though it led to her injury:

But as their undersides

pass over you, you
drop the way that blossoms

Thompson relates the fragility she sees in this beautiful image with the fragility of her own physical being, but also in her marriage.

David Daniel includes an interesting essay, “Thoughts On ‘Me and Bobby McGee’ and the Oral and Literary Traditions,” in which he analyzes not only this song, by “Barbara Allen,” and others. The issue wraps up with a tribute to poet and editor John Elsberg.

For a first issue, this one packs a wallop. I see some new voices and some old. I have to say I’m excited to see a print start-up when so many new journals are online. 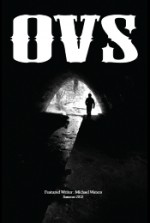 OVS is a print and online journal founded in 2009, based in the White Mountains of New Hampshire, featuring art and poetry. The issue opens with an interview with the poet Michael Waters. I was impressed that the interview included a healthy selection of Waters’ work, though the selections are uneven. From “The Inarticulate”:

Touching your face, I am like a boy
who bags groceries, mindless on Saturday,
jumbling cans of wax beans and condensed milk

among frozen meats, the ribboned beef
and chops like maps of continental drift        (lines 1-6).

He describes the groceries vividly, the “egg carton perched like a Napoleonic hat” (9) and “something awakened by water,/a soothing skin, eggplant or melon or cool snow pea” (10-11). This sudden discovery enthralls the boy. As the poem progresses, he has drifted off into some internal reverie, which makes Waters’ meaning clearer: “Touching your face, I am like that boy/brought back to his body, steeped/in the moment, fulfilled but unable to speak.” (lines 21-23). The idea comes through with some work. The poet never describes the person’s face, which is purposeful, I’m sure, and focuses on the groceries. The reader is supposed to draw parallels between the groceries and the face, but the intended points of reference are a little unclear. Of course, this is a poem about struggling to communicate something, so it does make sense that the poet should struggle to communicate it.

“Miserere” is a stronger poem. It describes a narrator and his lover (we assume) bathing. The narrator shares in her meditation on the changes in her body after her mastectomy. Waters’ language is surreal and powerful, from his description in the first line of “Alina kneel[ing] in steam” to the surgical apparatus, “systems of pulleys/worked by little metal wheels/screwed into each shoulder.” (lines 3-5). The language never lingers on sentimentality; through the window, a beautiful winter world awaits, “a healing chorale/that resurrects…” (11-12). In this music, she finds hope.

“Seeing My Grandfather Pray,” by Sherry Horowitz is one of the standout poems. It begins:

Why my grandfather prayed, he became a woodwind:
His chest, a case for the murdered, whistled like reeds.
His head bent over the instrument of his moaning song.

It’s an elegant, sensual portrait. Jessica Tyner’s “Holy Week at Playa Negra” describes a vacation trip that opens the narrator up to questions of contentment in elegant language. The unfortunately titled “Blessed” by Sherry Horowitz is a well-rendered portrait of the narrator’s homeless father. Jonathan Veach’s “Our Lady of the Surf” is a very well-rendered mediation on falling in love, possibly with the ocean, possibly with a woman. Ian Khadan’s “Willow” is a vibrant love-song for the sport cricket. “Not My Wedding Day Or the Birth of My First Son,” by Anna Harris, tells the story of a recent discharge from the Navy. The details are well-chosen, from poor shipmates who re-enlisted for the food, to the feeling of freedom the narrator expresses.

The art included in the issue is mostly photography with a few paintings, much of it scenic.