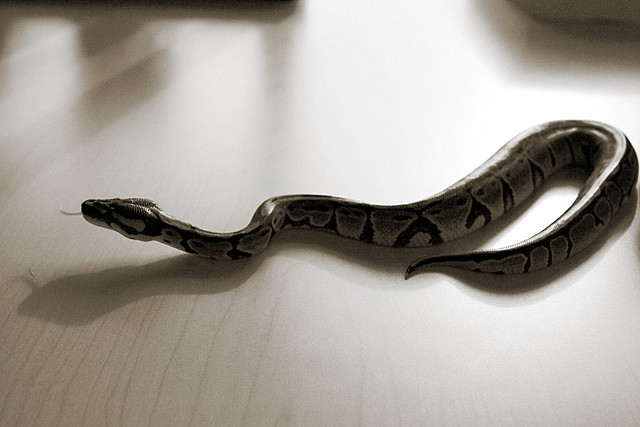 Snake Charming for the Next Generation

There is a snake on your desk.

It is your first day of work. You are alone after a morning of team-building exercises, which you spent sweating into the armpits of a borrowed shirt. You had a tête-à-tête with your supervisor about time sheets and integrity that ran through your lunch hour, but you were afraid to chew in front of him, so now you are starving.

You do not know if the snake is poisonous. Snakes have never been your specialty. You examine it, try to be rational and adult, but all you can think is, it’s a snake! and it’s black! and it’s as big around as a penis! But you realize how subjective that is, and how revealing, and so you mentally amend this to it’s as big around as a pen! which isn’t true, but it’s hard to think of cylindrical things when the shirt you’re wearing smells like someone else’s detergent and there is a snake on your desk and you are going to get fired and have to work at Pizza Hut like everyone else in your graduating class.

You take a breath. You look around for your boss, or a binder of company policies on unexpected reptilian issues. In the neutral-toned distance, somebody switches on the copy machine. The snake flicks its small, black tongue. It tastes your nervous air.

In college, you believed you’d rather die than work in a cubicle. But then the economy fell out from under you and the rest of the nation, and your diploma failed to be the magic carpet that every adult in your life had always promised it would be. Your friends began to move back home one by one, shelving English and Peace Studies degrees to apply for management positions at Home Depot and Zaxby’s, and you thought: Okay. I can compromise for just a little bit. I can do something I love on the side. Until things even out, you thought. You checked your teeth in the mirror. Maybe they’ll give me dental coverage.

Your parents phoned every Sunday. “Have you found anything?” your father asked, weekly.

“I’m still looking,” you answered, weekly. It was getting harder and harder to say this. Applying for jobs was beginning to feel like stapling your resume to small boulders and pitching them out of airplanes. You just prayed they’d hit the right people.

“You know there’s always room for you at home,” your mother said, weekly.

“It’s not that we don’t think you can do it,” your father said, weekly. Which meant, of course, that they didn’t.

You fudged some numbers. You made follow-up calls. You were enthusiastic but not overeager. You smiled plastic smiles at plastic interviewers and described your qualifications and eagerness to work for a Company Just Like This One—only not Like This One, but actually This One, because This Company is appealing to you in some deeply personal way that is exactly the kind of bullshit that the interviewers are paid to believe about Their Companies. Your friends, in parents’ basements across the country, donned polyester uniforms, baseball hats with chickens on them. Their Facebook updates now are frequent, and bitter.

“I can fix up the basement for you,” your mother offered.

“What happened to my room?” you asked.

“Nothing,” she said. “I just moved in a few things. Sewing. Scrapbooking. The dog.”

“The basement is creepy,” you said.

“It’s amazing what a few throw pillows can do,” she said.

But somehow you got hired, and here you are: your first day in the real world, and there is a snake on your desk.

It stretches lazily across your keyboard, black in a way that drinks in the light and spits nothing back out—almost too black to be real. Perhaps it’s not. Perhaps this is a test. They knew they made a mistake hiring you, and now they’re just waiting for you to fail so they can outsource your job to India. “Couldn’t even handle a snake,” they’ll scoff. “Kids these days. Think life should be handed to them on a silver spoon.”

You tug at the cuffs of your shirt. The snake drapes itself across your QWERTY row.

You walk to your neighbor’s cubicle, trying to project an air of confidence. His nameplate says Bill. You are a little angry that somebody named Bill works in Billing. You think he could have made better life choices.

Bill is watching a YouTube video of fainting goats. He sees you and jumps.

“Oh, hey,” he says, whipping his headphones off and trying to look official. “You’re the new kid.”

Your hands are empty. You wish you’d brought something with you, something work-related, like a stapler or a three-hole punch, but there is nothing in your cubicle yet except your computer and a snake.

“You have any questions or anything?” Bill from Billing asks.

You shake your head. Your voice is a squeak in your throat, a squeak of cheerful desperation. “Nope,” you squeak.

Bill nods. It is obvious he wants to get back to his goat video. “Well, let me know if you need help.” He tries for a joke. “You know where to find me!”

“Yep,” you say. You don’t want to leave because there’s nothing for you to do but go back to your cubicle and the maybe-poisonous snake, but Bill fiddles meaningfully with his headphones, and you are forced to take the hint. “All right,” you say. “Goodbye!” You punch the air a little. “Neighbor!”

The headphones are on. Bill offers a jaunty salute. He thinks you’re useless. You can tell already.

You hope that the snake will be gone by the time you get back, but it is still there. It has coiled itself around your computer. It makes sense, you guess. Snakes are cold-blooded, after all. They have to take their warmth where they can find it.

You approach your desk. The snake watches you, eyes glittering like grommets. Okay, snake, you think. I am just going to do some work now. You can stay there and sleep, and I am going to have a productive, adult day. And I am going to earn a paycheck like a productive adult person, and not move back in with my parents even though the economy is miserable, and I majored in comparative literature and there is a snake on my desk.

Heart pounding, you creep onto the edge of your chair. The snake doesn’t move.

Emboldened, you switch on the computer. You log in, open an empty spreadsheet.

The snake unwinds itself from the computer, undulates silently across your desk. Your throat goes dry. You wish you’d thought to get coffee. You never liked coffee, but you could use one now.

The snake spills itself across your mouse pad, dragging the smooth skin of its underbelly over your wrist. It is surprisingly soft. You didn’t realize it would be so soft. You swallow, affect an ergonomic posture as it spirals up your elbow, cool and dry. It settles itself in the hollow of your throat, and you hold your body very still. You type only with your pinkies, your left thumb. It is less difficult than you expected. You can easily copy and paste.

The back of your throat begins to ache. You think longingly of the water cooler, a coffee. You think: maybe something half-caf. With three Splendas, no cream. If a Starbucks order goes out later, maybe you can chip in. Maybe, once the snake has gone, you can be the one who takes the order.

Kendra Fortmeyer is the fiction editor for Broad! magazine and a Pushcart Prize nominee with an MFA in fiction from UT Austin. Her work has appeared or is forthcoming in The Toast, PANK, Smoking Glue Gun, NANO Fiction, apt, Juked, Forge, Fiddleblack, Corium and elsewhere. You can find her on Twitter at @kendraffe.

Fiction
Previous PostConsumption
Next PostA Turtle, A Lizard, A Snake