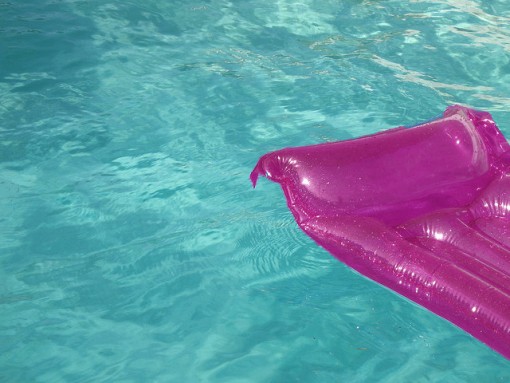 The last flower of the season dances backward to the gate, where she does a cheer to impress her younger sister. Then, smiling tremendously and waving at imagined crowds on either side, she sashays across the pebbled cement and, with mock surprise, tumbles into the pool. Her little sister immediately jumps up and imitates the whole show, and their mother claps for them as they slide up out of the kicked­-up water.

A man could only watch this in glances, from the corners of his eyes, because in spite of her physical maturity she is still far too young, and everyone is aware of him. The girls’ mother waves at me­­—I’m free to gaze, to gawk, so long as I smile, from time to time, at the mother. Kids will be kids.

She’s a beauty queen, all right, born for this spotlight age, spirited, sparklingly energetic, adored by her public. The older girls who were here all summer but have now disappeared were languorous bags. Already having conceptualized display as a means to an end, they expend minimal energy. Dull and decadent, tanning on their floats, they doze behind enormous sunglasses, sloshing water onto their skin from time to time, ostensibly to cool it.

These two are lucky to be able to swim after Labor Day. The pool has usually been let go by now, and green has crawled all over the blue bottom. Then the leaves will fall, and darkly sink, until we can’t see the bottom. I haven’t swum in years, but I remember how it feels different in late summer, after the main heat has dissipated­­—even watching it feels different, when the air and the water seem equally insubstantial.

The girls’ mother says something. The flower puts her float in the water, lining it up perpendicular to the edge, and backs up for a running start. It’s pink. It drifts. Autumn’s here. She runs, leaps out, lands straddling it and falls backward when it shoots out from under her. Her sister and her mother laugh, and I smile when she resurfaces. I sorrow for men.

Gregory Napp teaches at Kyung Hee University. He lives in the northwestern corner of Seoul, South Korea with his wife and two children. Some of his short work appears at MudLuscious, SmokeLong Quarterly, elimae, and juked. He is a co-editor at capefearreview.com.