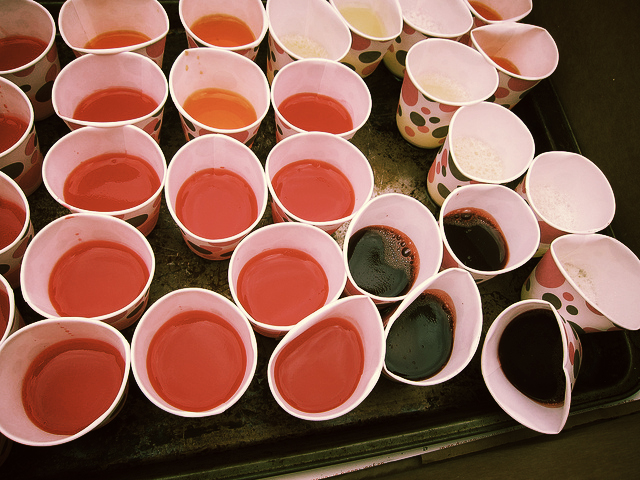 The Pleasures of Mountaineering

Before her father, there was the hill. Crag, old woman, hag-shoe hill. Something she climbed often as a singular gypsy-child of the earth’s elevation. “Feral by allowance,” she told the adults she encountered should they show concern that such a young girl was out alone, like a fairy-tale character doomed to disaster.

She later learned the hills were not naturally barren, that they had once been a land under canopy through which bears wandered, free, before they were shot and skinned or made to dance endlessly in cages. Never mind. She would think of barrenness as beautiful, no matter the cause.

After her father imprisons her in the basement, she walks the wild mountain of memory, working the graveyard shift until she summits. “Still, Still, Still,” she sings, as she drifts into neon.

What is truer than a temple which feeds you to yourself? Which makes of you an infinite loop? Even the bananas have it, this impulse, (so natural, like childbirth or nudity), curving into themselves like larvae.

Jim Jones says, in the world in which he manages to outrun himself, that he only wanted to honor the dead. To honor the dead you must first create the dead, he says. You can quote me, he says.

Fetching a stethoscope, instrument to monitor (and insure) the slurring, tapering tip-toeing out of heartbeat, one man survives.

The rest prove themselves.

The little granules on their tongues so sweet, they make them slur. Each consonant and vowel extending into the fuuuuuuuuttttttuuuuuurrrrrrrr.

Ariel Castro sends glossy magazines about death down the basement stairs every third Tuesday. The white glow not the light at the end of the tunnel, but the head of the first maggot burrowing into your skin.

You see, he says, the tunnel goes into you.

The women run to the end of their leashes, roll around with the other captives on the hill. Ariel a siren song, mermaid on a thunderous rock.

The city will be gutted.

He will help it along—a new kind of garbage collector. He will remove the most verbose of bodies, the most visceral and fecund. He will eat their fruit flesh, leaving only their rinds.

In the forgotten houses of America he will play the National Anthem. Looking for some holy tool, he will only find the wilted pages of a threadbare drama.

If You See Something, Say Something

“Here, Kristy,” her step-father calls under middle school portables. Or, “Hear.” A taunt. Now he can visit whenever he wants.

In her backpack by the road, a small pink heart.

In the first hour of the most recently created day, the church bell strikes once and is then silenced, as if the ringer is tired from the previous world’s work.

The planet is now barren and full, her babies expunged, her mouth choked with hypoxied coral and petrified trees. If there are ships, they are composed of the bars of long-abandoned cells, made only to sink.

In this place he Googles himself over and over. The screens display no results, suggesting only other search terms.

Did you mean: father

Did you mean: child

Erin Fortenberry lives in Laramie, Wyoming with her husband and a cat. She earned an MFA in fiction from the University of Wyoming and now works as a campaign assistant for a non-profit and sometimes as a part-time instructor. Her work has appeared in Hobart and The Millions. Follow her on Twitter at @e410.