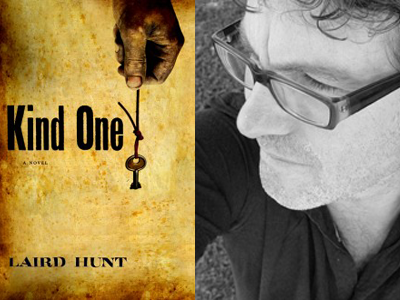 Laird Hunt is the author of a book of short stories, The Paris Stories (2000), and five novels, The Impossibly (2001), Indiana, Indiana (2003), The Exquisite (2006) Ray of the Star (2009) and Kind One (2012). His translation of Oliver Rohe’s Vacant Lot was published by Counterpath Press, who have also published his co-translation with Anne-Laure Tissut of Arno Bertina’s Brando, My Solitude (2013). Hunt is currently on faculty in the University of Denver’s Creative Writing Program, where he edits the Denver Quarterly.

Monkeybicycle: First off, Kind One was recently honored as one of four finalists for the PEN/Faulkner Award. Congratulations! How does a nomination like this affect the reception of the novel, its sales, and your daily writing routine?

Laird Hunt: My work has proved to be pretty award-proof over the years so it was hard, even as I took the call from Pen/Faulkner, not to suspect that some joke was being played. This feeling, which was unsettling to say the least, only subsided when I learned pretty quickly afterward that I had not in fact won the prize and I was able to take solace in the knowledge that if nothing else my streak was intact. Having said that, it would seem that being a finalist for the Pen/Faulkner is considered a kind of accomplishment in its own right and I have noticed an uptick in interest in Kind One. I don’t know how any of this will affect sales but I am pleased to be able to say that after that brief unsettling period I have been able to return to writing, untroubled by anything except the absolutely everything that is daily living when you have a job and a family, as well as one often grumpy, aging cat who needs medicine and another rarely grumpy, aging cat who needs medicine.

Mb: Kind One is your sixth book, and your fifth novel from Coffee House Press. What kind of symbiotic relationship is there between you and Coffee House, and is this a relationship you believe (or hope) will last indefinitely?

LH: I have worked closely with Chris Fischbach, who is now Coffee House’s publisher, since the start of my adventures in novel-writing. This is, if I understand the publishing world at all, quite rare. Part of the nature of my relationship with Chris and Coffee House is that I have been given extraordinary latitude in terms of bringing to the table the kinds of books it has struck me as essential to write. I have never been asked to write another “like that last one.” Even in the context of the relative success of Kind One, Chris hasn’t asked me if I’ve got something else like it up my sleeve. I’m definitely not interested in walking away from a publishing experience like this one.

Mb: The story of Kind One takes place from 1830 to 1930 and across the landscapes of Kentucky and Indiana, reproducing those places and time periods in beautiful detail:

How much research did you do in preparation for the geographic and physical expanses of the novel?

LH: There were two approaches to landscape in the book. The Indiana landscape is based very much on my own lived sense of central Indiana farmland past and present. There is a Clinton County in Indiana and I lived there for years and still go back and did so a number of times while I was writing the novel. The Kentucky part of the book is different. There is no Charlotte County in Kentucky and it was important to my sense of Ginny Lancaster and the others to create a world that was informed as much by imagination as it was by the memories of my very few trips to the country somewhere vaguely off to the east of Louisville (as I see the “placement” of Charlotte county). Remember, Ginny hasn’t been to Charlotte County in 50 years and everything she remembers about it is seen through the almost overwhelming filter of the rage and guilt she is wracked with. This is certainly the case for Zinnia too. Proust remarks that the only place you can find lost paradises is within yourself. This goes for lost hells too.

Mb: The focus of Kind One on sexual, mental, and physical abuse allows the reader to see this often blurred or masked content in all its stark and awful realities:

As that whipping went on you could hear pigs they hadn’t sold off at it in the dusk light at the corners of everything, and out over the field you could see tornadoes of evening birds harrowing the insects.

At the time of drafting though, how difficult was it to write about and process this content?

LH: The institution of chattel slavery in the United States was unspeakably violent. Rape, murder, and torture were commonplace and legally sanctioned. These people had no protection, nowhere to turn. Any relief they had from this centuries-long nightmare was anecdotal and could not be counted upon. Not for nothing does Frederick Douglass refer to the whip as the bloody gateway into the institution of slavery. We know these things. Of course we do. But we tend to know them from a distance. Greater or lesser to be sure but a distance nonetheless. If nothing else I wanted to wake myself up out of the slumber that this kind of distance helps us sink into. I wanted to look as unblinkingly as I could into the eye of that heinous vortex and see what was swirling there. It was not easy to consider this world, nor to write about it, but any difficulties I might have faced were as nothing compared to what people then and now (if we think, say, of the eastern part of the DRC) have confronted.

Mb: What is the next project you’re working on, and when or where might we catch a peek of it?

LH: I’m working on a few things, which is unfortunately all too typical of me, but the most immediate is the series of autobiographical (though sometimes quite fictional) stories I have been working on. I have been loving having shorter, complete works I can wrestle with for weeks instead of years, things that I can fire off into the world from time to time. It makes me wonder why I ever got into writing novels.

Purchase a copy of Kind One here, & read more from / about Laird Hunt here.