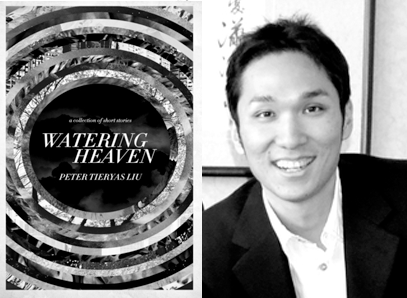 Peter Tieryas Liu’s debut collection, Watering Heaven, released from Signal 8 Press in 2012 and was long-listed for the Frank O’Connor Int’l Short Story Award. He has work published in places like the Evergreen Review, Indiana Review, New Letters, Toad Suck Review, and ZYZZYVA. He is also a VFX artist who has worked on films like Men in Black 3 and Hotel Transylvania. His novel about Asian noir and serial killers, called The Wingless, is coming out in 2014 from Signal 8 Press.

Monkeybicycle: Before I ask any questions I just want to say that Watering Heaven is brilliant ​and one of the best collections I’ve recently read. It’s surreal and funny and ​beautiful, even heartbreaking at times. But it’s really a collection that shows a ​wild imagination. Where do all these ideas come from? What inspires you?

Peter Tieryas Liu: Very kind of you to say, thank you very much! The ideas come from everywhere, and in this case, many of the stories came during my time in China. There was an energy and dynamism that blew me away and the cities felt teeming with life. Every night, there’d be a completely new adventure, a whole new suite of companions and friends. People had come from all over the world to cities like Hong Kong, Shanghai, and Beijing. I was told before I went that Chinese were not as ‘creative’ as Westerners, but that was quickly disproved as I was mesmerized by the art galleries, the jazz clubs, the musicians, and the writers there. Literally, I’d spend nights getting drunk on er guo tou (which is 60% proof) while swapping tales about philosophy, religion, and Chinese romance in broken Mandarin (though most people spoke basic English in the big cities). I had a handy notebook with me everywhere I went and jotted down story ideas. Even trips to the subways filled me with inspiration. Many of the stories in the collection were written in a cafe in Beijing where I waited for my then girlfriend (now wife) as she worked. I wanted to write about the contemporary China experience in contrast to much of what I’d read about China up until then that fell into two categories; pieces critical about China, and melodramas involving melodramatic names like ‘Dancing Dragon’ or ‘Crimson Petal.’ My first China story to get published was called “Forbidden City Hoops” in ZYZZYVA and I was inspired while wandering around the Forbidden City looking for a place to propose to my then girlfriend. In the process, I noticed a bunch of people playing basketball on a really nice court on the grounds of the Forbidden City, all while I was finding out about the myths and history behind this incredible site that I’d only seen in movies until then. If there was a theme that I feel connects the collection, it would be the idea of change, especially as I was experiencing so much of it in China.

​Mb: For all the magic and science happening in these stories, they’re also very ​grounded in Beijing. It was actually a surprising treat for me reading these as ​I’ve spent a bit of time in Beijing. How important is China to your fiction?

PTL: Very very important. I joke with my friends that everytime I go to any store, everything is “Made in China,” including the stories in Watering Heaven. Watering Heaven would not exist had it not been for my time in China. At the same time, I am very proud of being American and cherish the ideals we hold. I know that sounds cheesy, but as I struggled hard to climb my way up, I think the idea of the American dream is one of the most incredible ideas we as a species have thought up of- you know, anyone, regardless of background, race, religion, etc., can make a life for themselves. I think part of what I enjoy doing is writing about America in the context of China, the intersection at which the cultures both meld and clash. At the same time, my big fear is overgeneralizing. Just as there are a million Americas, there are a million (or a billion) Chinas, and every one of them is distinctive. For me, wandering the country and the cities had me thinking about so many things. I discovered a whole suite of new Chinese literature I’d never even heard about, crazy magical tales full of adventure and ontological whimsies. I miss Beijing. Just not the pollution.

Unfortunately, my essence too was just a shard, a sublimation of everything I’d wanted. . . . Death was the normal end for everyone: there, and only there, would my search for normalcy end.

Mb: ​Many of these stories are about alienation, discovery, acceptance, and creativity. ​How has your own creativity helped you discover yourself?

PLT: It has been integral. I’ll have issues that will bug me. I will pore over an idea, a regret, or a desire obsessively, unable to sleep if it bugs me. The only way for me to exorcise it is through writing. I attack themes in my stories, especially my longer works. A lot of times, I won’t even know where it’s going until I get it out of my system. “Resistance” is an example of that and a story I cite as one of the most personal ones I have. Outwardly, it’s about a guy who develops an immunity to HIV and decides to help a group of HIV-positive prostitutes. I honestly had no idea where it was going or how I was going to get to the end. I just knew I had to write it and I fought and hammered against every word. It was a tough story to write, but in the end, it helped me to accept things I’d struggled against from my past. I think one of the events that inspired this story was visiting an underground shopping center in Macau a few friends took me to. In the evenings, the whole area is full of prostitutes who will swarm single men looking for company. The females in our group were shocked at how they brazen they were. In fact, at one point, when I went to use the restroom, they surrounded me and I had to tell them I had no interest. “No no no.” It was sad seeing so many of them. At the same time, I wondered what kind of stories each of them had to tell.

Words should have gravity. If you can’t get arrested for a word, it probably isn’t worth using.

Mb: ​Do you think language has gravity? Or that different languages have more ​gravity?

PLT: Absolutely. In fact, as a writer, part of what I strive for is to form gravity wells out of my stories to suck readers in. Literally, artificial black holes. Anything less would be a failure. Well, if it has slightly less impact than a black hole, I would be OK, ha ha. I speak fluent Korean and have been studying Mandarin a whole lot so I see the differences between the languages. Of course, I love English, but studying Mandarin has given news insights into how language shapes and shifts the dialogue of a culture. There is nothing quite like reading Confucius in the original Mandarin. There’s an elegance represented in those characters because they’re pictographic and the context gives each word a different subtext. When the character in “Chronology of an Egg” talks about words having gravity, she’s relating to how the Japanese tried to control language in China and Japan during their WWII invasion. Many of the Korean words I know are directly absorbed from the Japanese. Many people were also given Japanese names and forced to learn Japanese. By controlling the language and diction of a culture, you can also control their thoughts to an extent. At the same time, freeing language can also free up thought and beliefs. It’s a topic I go back to again and again, particularly as Orwell’s essay on “Politics and the English Language” was such an eye-opener for me when I first read it. Orwell dwells on how the news and media were controlled during the Spanish Civil War to literally reshape reality. While I’m not looking to reshape reality, I am always looking to try to give glimpses of my own reality through my stories mixing in my experiences not only from Asia, but the entertainment industry. Only readers can judge if they’ve been sucked in.

​Mb: You’re also an award winning visual effects artist for video games and films. Is ​there anything you don’t do well?

PLT: You know how in interviews, they ask an iteration on the question, what is your weakness, and people come up with something generic to make them look good? Like, “My weakness is I’m too passionate about my work,” or something like that. Well, let me cast that aside and be honest. I’m not very good at many things and here’s a brief list: acarology, aerobiology, allergology, andrology, apiology, archaeology, cardiology, cariology, coleopterology, conchology, coniology, craniology, dendrochronology, dermatopathology, edaphology, electrophysiology, entomology, exobiology, gerontology, glaciology, hematology, heliology, ichthyology, karyology, kymatology, laryngology, lepidopterology, limnology, lithology, lymphology, malacology, mycology, myology, myrmecology, nematology, neonatology, nephology, nephrology, orology, orthopterology, osteology, otolaryngology, otology, planktology, pomology, posology, proctology, and many more. I’m also trying to get better at skateboarding (I still can’t balance myself on a skateboard) as well as try to be a better writer, though that’s currently it at the moment.