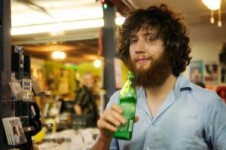 Monkeybicycle: Spork Press is amazing, and they make incredible literary objects. What is it like to hold one of their perfectly made books with your name on it?

Colin Winnette: They brought just as much to the book as I did, made it more than a book, more than a short story collection. They gave the work a meaningful container, which opens the stories in a number of profitable and surprising ways. The actual physical feeling of the book is just fantastic too. It’s heavy, thick, worth running your fingers over. The books are different with every printing, they degrade, they mutate—they are clean and rough. It’s an honor to be in such skilled and inventive hands. Receiving the first box was one of the best days of my life. I’m not exaggerating. I’ve loved Spork for a few years now, ever since I bought Zachary Schomburg’s From the Fjords, which I loved and still love and still reread regularly. At the time, I thought, this is why books are forever. Other forms will develop alongside them, sure, and offer other valuable reading experiences/valuable experiences in general, but this is something unique and important and irreplaceable. That they agreed to do a book with me, it’s beyond what I could have hoped for myself. I only hope more people get their hands on some of Spork’s projects.

Mb: Tell us, how did ANIMAL collection come to live at Spork Press?

CW: I published some short pieces from this collection in their online journal awhile back. They were really supportive and seemed to like the stories a lot. I actually sent them another book and they accepted it at the same time as another press, Atticus Books. I thought about it for a while then asked Spork if they would be interested in looking at the animal collection instead. To me, it seemed like a better book for them. The right book for them. Drew was a little irked, I think, until he read the animal book and was like, Oh, this is the book I actually wanted, we’ll do this one. Then it was smooth sailing and everybody was/is happy with the outcome.

Mb: The stories in this collection are all about relationships, some realistic and sad, others quirky and fun: “On the drive home, the QUAIL tells me she’s had an affair with Raymond Carver.” What makes our relationships with one another so inherently animalistic?

CW: We’re animals, I insist on it. I’m not sure the distinction is a profitable one. As for relationships, relationships with other people are messy and tend to break down whatever normalizing safeguards we’ve put in place. There are the obvious forces underlying most relationships: desire, passion, loneliness, happiness, fear, insecurity, love, just to name a few. I love when people start getting weird in a relationship, or slip up, or act in some perfectly human way, but one that is strange-seeming or socially unacceptable, and then they claim they were “not themselves” or, on the flipside, a partner who acts that way is “crazy.” We forget what complicated creatures we are, or we want to forget. There’s more at play than we’d like to admit, maybe. We’re in less control than we want to think. It’s a way of getting out of admitting something directly. You say, I was someone else. I acted like an animal. Not, I did this thing because I was irrationally upset and could not deal with it in a more suitable way. I am to blame because I lost control. We reduce it, and slough our responsibility to own up to what we’re capable of. When you start to examine relationships, it becomes clear just how vast is the variety of ways a single person can act/live. People are unpredictable, wild, and it’s particularly visible in intimate relationships. This is the cause of a lot of pain and a lot of joy. My brother-in-law was a divorce lawyer for a while, and he told me that kind of works shows you the absolute worst in people, how terrible we can be to someone we supposedly loved, or still love. He had to leave to job because it was so upsetting. When you’re in a relationship, even a friendship, you invest some of your more powerful emotional forces in someone else, you expose yourself and hook into them, and that’s a crazy thing to do. It’s wonderful, but totally crazy, when you think about it. Because you simply cannot control other people, not really. You can try, some people even succeed for a period of time, but people change, they shift, reveal more of themselves, hide more of themselves, and that can be wrenching, upsetting, wonderful, thrilling, all of it. So some people get wild when that happens, others shrink back, others handle it quite well and kudos to them and we should all try to be more reasonable and good to one another. All of this is not to offer an excuse for cruel or abusive behavior. People are terrible to one another, and it’s inexcusable. They are also very good to one another. We are powerful creatures. The terrain of relationships is unsettled and will always be. It’s tectonic plates. It’s fucked up real good stuff.

Mb: “We could do anything we wanted. Get crazy. Go wild. Be animals.” Is ANIMAL collection about the humanness of animals, or about the animals in all of us?

CW: Neither of these, really. Or more than both. I get frustrated with the distinctions we make, sometimes. On some level, AC is working to unsettle any fixed notion of what is “animal,”what is “human.” Each story centers on an animal in some way, but the nature of that animal to the human world is always different, even if only slightly. The boundaries between human and animal are inherently tied to the story being told, so they shift with each new perspective, each new story. That’s very important to me. When the position of the animal shifts, everything around it shifts as well. An art historian, David Getsy, once talked to me about it in terms of the figure/ground relationship in painting. In this book, and in subsequent work of mine, the figure/ground relationship isn’t fixed. When the figure acts/speaks, it alters the ground (the environment), and, alternatively, elements/changes in the ground (environment) alter the figure. It’s an ongoing, reciprocal mutation. Spork has offered to allow me to go back in and alter the stories between printings, which I’m considering doing, if only slightly. Due to the way they put the books together, the typeface on the cover will degrade with each printing, the colors of the cover change, and it’s fitting, I think, if the content shifts as well. I’d like the books to change consistently, but still resemble one another as much as possible.

Mb: You have a new title forthcoming from Atticus Books, dual novellas under one cover. Can you share a secret or two about that book with us?

CW: A Long Line of Diggers is a novella tandem. We’re in design phases now, which is exciting. The two novellas featured are Gainesville and In One Story, The Two Sisters. They are, in their own ways, about family, or specifically, one family a piece—at least in the way AC is about animals. They are extremely violent and strange and, as far as I’m concerned, enjoyable stories. They’ll premiere at AWP in Boston, but the official release date is set for July 2013. People can read excerpts from earlier versions of the manuscripts here, here, and here.