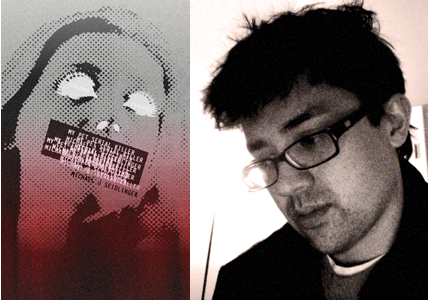 Michael J. Seidlinger is the author of a number of novels including The Laughter of Strangers, My Pet Serial Killer, and The Sky Conducting. He serves as Electric Literature‘s Book Reviews Editor as well as Publisher-in-Chief of Civil Coping Mechanisms, an indie press specializing in unclassifiable/innovative fiction and poetry. He has been a lot of things but nowhere near as much as what he hasn’t managed to become. Odds are he will never be much more than what he already is, but he’s optimistic; he wants to believe that the aforementioned statement is a positive rather than negative one. He’s been a painter, sculptor, vocalist, bassist, DJ, professional boxer, game designer, car washer/detailer, short-lived drifter, and mover/construction slave. He enjoys good company, good conversation, good food, good drink, good wisdom, good books, good films, good fights, good videogames, and plenty of really bad, bad decisions. Looking for a good time? Contact him at your earliest convenience. Disclaimer: Michael J Seidlinger cannot guarantee that you’ll have a “good time.”

I support you financially. I give you a place to hide. I make sure you are never under suspicion of being what you really are, a cold-blooded psychotic killer (so hot), and, in return, you clue me into your process. You become mine.

Monkeybicycle: Your recent novels focus intensely on identity, from national to individual. With My Pet Serial Killer, you weave together social media, technology, identity and art, while The Laughter of Strangers is more distinctly about the difference between external and internal perception of self. How has technology changed the way we interact with and think about one another?

Michael J. Seidlinger: The technology isn’t completely new, but I do get the feeling that it is still new: Social media, its effects, and how we live today. Some of us fixate too much on the social media versions of ourselves and end up hating how much of ourselves have been integrated and/or absorbed by the technology. We might fight back but a lot of us will keep coming back. I’m not sure where I’m going with this… but, with both My Pet Serial Killer and The Laughter of Strangers, I do take into account the various subtleties and complexities we find in our frenetic modern day society. And, yeah, that means it’s necessary to inspect social media technologies and various aspects of a very “connected” and self-aware personality. The overview of the way we live, these days, seems to be more about fielding perception rather than perceiving for the sake of perception. We become more hyper-aware, in a Baudrillardian sense, of how to quantify and capitalize on the interpretation of our actions and why we bother to do that. We still live the way we have before but now we post, retweet, and comment on every single part of this life and, for all the good, we have further quantified the negative aspects of our lives, the very lives that might have been straightforward and intrinsic if without modern influence. Our relationship with the technology might in fact be paradoxical in nature.

Mb: This year you’ve published a serial killer novel and now a boxing novel. Though both of these seem externally to be about violence, they’re much more concerned with the intersections between media, individuality, and technology. What does extreme behavior or celebrity tell us about ourselves and society?

MJS: A question instantly comes to mind: What does it take to keep a person interested? Throughout various parts of society, we are introduced and smothered by the concept of entertainment, and the popular opinion of what is deemed entertaining. Though My Pet Serial Killer and The Laughter of Strangers operate on different channels, My Pet Serial Killer delves into the merger of two absolute extremes. If you look at sex and you look at violence, you will discover that the extremes of both result in its opposite. That is, violence at its most extreme is sexual and alluring. Sex at its most intense and absurd is borderline violence—be it mock-snuff, bestiality, etc. The intersections of everything we know takes a center stage on what we might as well dub the “digital stage.” Both extremes exist online and become deviant yet curious little anomalies for those inquisitive enough to sniff them out and explore. Technology acts as the temptation and we use it to get to what we think we want.

With The Laughter of Strangers, I delved, via the sport of boxing, into the brand-awareness of the celebrity. I guess it wasn’t the most direct approach but I ended up where I was and I had the experience to explore, and to surmise, the fictional context of what would become the book’s main character, “Willem Floures.” Though I see most things as violent—be it the cutthroat and extremely competitive mainstream culture idols/brands looking to make it to number one on the charts or a grandiose spectacle for two top boxing contenders on a Saturday night million(s)-dollar-in-the-making Pay Per View for the boxing title—I ultimately see a culture that values occupancy. We are all seeking something that can “occupy” our time. How much of that outlasts the current minute, hour, day? We probably can’t really tell. Especially now, the tail end of 2013, I feel the rumblings of a national culture that is having trouble keeping itself occupied; there’s so much there, truly a culture of abundance, but, as a result, we are inundated with options and we cannot even begin to decide. There is a consistent hustle for the new, the temporary, and the ultimately fleeting, and as much as there are brands shamelessly looking to occupy our attention spans, there are people, celebrities, designing the quickest way to be heard, seen, and remembered. What does this mean? Inevitably, what is delivered outweighs our needs, and that keeps us clamoring to understand what is needed, interesting, or simply just some novelty, a trendy brand.

The 14 that remain, they are young but ill.

They are versions of me that remain only because I’ve moved on. I have outlived their goals, their lives made, met, and finally matriculated to the point of losing momentum. My way of saying they would have followed in my footsteps, not wanting to change anything.

Mb: Along with the books you seem to always be writing, you also took over Civil Coping Mechanisms. How has publishing affected your own writing? What is your goal as a publisher?

MJS: I kind of view this as two pieces of one heart, if you will—I’m extremely thrilled and humbled to have the opportunity to publish such an amazing array of talent. I’d be lying if I said the publishing side didn’t cut into my own writing. Got no room for any complaints though: I love every moment of it, be it the buzzed, alcoholic moments shared between publisher and author at a bar a the dead end of night or the anguished research and accounting that goes with keeping the books in check. I’d rather die than let this opportunity go to waste.

My goal with Civil Coping Mechanisms (CCM) is to continue building a catalogue of innovative cross-genre, cross-structure fiction and poetry. I’m always looking for voices that lack an equal. I am attracted to the authors that don’t seem to need to tap into what exists in order to birth something of their own; they blur the lines simply because they are more interested in exploring rather than wondering whether or not they crossed the line. Originality is what any artistic medium hopes to attain and beyond initial influence and curiosity, the artist most often follows his/her own path. It’s intriguing to see where that path began and, what’s more, where it leads.

Mb: With the consolidation of the big New York publishers and the proliferation of independent presses and self-publishing, how do you see publishing industry changing over the next couple years? How important is a healthy independent press to this?

MJS: We are beginning to hear the phrase “golden age of indie publishing” floating around and I think it makes a whole lot of sense. The Big Five are huge entities owned by corporations that usually don’t have publishing in their immediate focus. They are corporations that are primarily focused on the whole range of media platforms. What does that mean for publishing? Well, more often than not, nothing; however, indies are in a position where their branding and catalog of titles make or break their entire business endeavor. Every author, every action, counts. Indie publishers take hold of the project like it’s a baby and they cultivate it from the ground up. It is not uncommon for indie publishers to quickly cultivate friendships with the authors due to the many, many hours in discussion about the project. Indie publishing is hitting a golden age mostly due to this brand of collaboration between author and publisher, but I also think it has to do with the closely-knit community that surrounds and supports the entire publishing endeavor. There are a growing number of readers that enjoy taking part in the community as much as discovering new and exciting writing. It’s refreshing to see a community this strong.

Mb: Writer, publisher, cover designer—you’re one of the busiest guys I know. What are you working on now and what can we expect from you and CCM next year?

MJS: On my end of things, there’s the recently released boxing novel, The Laughter of Strangers, published by Lazy Fascist Press, up for a good twelve rounds. It certainly wants to go the distance; hope people are willing to let it fight its way into a place in their minds. In tow for Spring 2014, I have a novel titled The Fun We’ve Had in the works. I can’t say too much about it yet but it has to do with two dead characters unknowingly living on in borrowed bodies as they float in the ether of an endless ocean that may or may not be purgatory. I’m also working on an homage pertaining to a big literary influence of mine.

On the CCM front, 2014 is going to be one hell of a year. To start things off, we will be publishing Kyle Muntz’s latest novel, Green Lights. In February, just in time for AWP in Seattle, we will be releasing Joseph Riippi’s remarkable novel, Because, and Robert Vaughan’s poetic masterpiece, Addicts and Basements. From there we have work from Soren Melville and Evan Retzer, two brand new voices that have yet to be read but will do well to act as a hangover remedy from the boozy antics of AWP. As the year progresses, we get deep into anticipated titles like Black Cloud by Juliet Escoria, Winterswim by Ryan W. Bradley, Left Hand by Paul Curran, My Apologies Accepted by Bunny Rogers, Noir: A Love Story by Edward Rathke, Walls by Andrew Duncan Worthington, We Will Listen for You by Nick Ripatrazone, and Paper Champion, one hell of an illustrated novel by the one and only, Shane Jones. Of course, there’s also the fresh cut, first ever alt-lit anthology, which Cameron Pierce and I are bringing out into the world in June of 2014, titled 40 Likely to Die Before 40.

Might need to learn how to function without sleep.