Welcome to another installment of If My Book, the Monkeybicycle feature in which authors shed light on their recently released books by comparing them to weird things. This week Gary Lutz writes about Assisted Living, his latest collection of stories, just published by Future Tense Books. 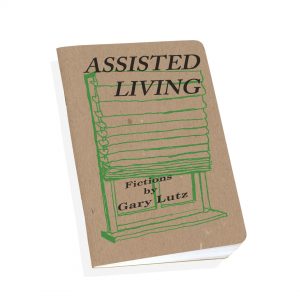 If Assisted Living were a girlfriend wearing a boyfriend jacket, she would reach into the inner pocket and find unreadable receipts, thumbtacks, sliced-off pockmarks still a little bloody, some dirt that could have come only from burial grounds, and the rinky-dink makings of a castle.

If Assisted Living were a stand-up comic on tryout night, the opening jokes would be “I was so dumb in math, I got the Pythagorean theorem mixed up with Grecian Formula” and “Reincarnation? Sure, count me in, but only if I won’t have to buy all new clothes.”

If Assisted Living were an affliction benignly but annoyingly exclusive to males, it would be a hydrocele already the size of a plum, if I knew what plums looked like, or how big they get, because that part of the supermarket always feels drizzly.

If Assisted Living were a marriage, the marital aids would have been worn out long ago. The kids would be grown, gone, ungorgeous, respectfully hateful.Their hobbies would have hardened them, left them bedridden with bedding and still more bedding: bedspreads, quilts, and counterpanes—if, for once, counterpane could live up to the promise of its first two syllables and be at least the least bit oppositionary, contrary, nullifying.

If Assisted Living were a mission statement, it would amount to no more than “Carbs all turn to sugar? Then what sweeties we must be!”

If Assisted Living were a cheap, dollar-store cosmetic, the sort resorted to by men of ruffled temperament, it would be a BB cream for oily skin but with only .0000001% salicylic acid, and it would leave the complexion looking even greasier, smearier, than before, even if minutes later it was caked up with pressed powder of the translucent kind; and this man, you’re sure to understand, would go out into your day, leaving it to others to glorify him, or you, as needed.

If Assisted Living were a sidewalk evangelist, the guy would be all smiles to everybody else but come up to you—you of all un-two-timing people—and say, “For God so loved the world that he gave his only begotten son, but, truth be told, the poor mope had been hoping for a daughter to pick up after him.”

If Assisted Living were a free, unmetered parking space reliably available in Pittsburgh, Pennsylvania, it would be on the unresidential side of 47th Street in the Lawrenceville district (next to the parking lot that’s always empty and across the street from the Busy Beaver store), or else on Allegheny Avenue in the Allegheny West district, alongside that record-storage warehouse that always looks closed.

If Assisted Living were the body it is purported to be, it would be a body bespeaking nothing but its own none-too-hazardous travails on its way to other, less cordially depilated bodies.

If Assisted Living were a man making his loose-hearted way down the boulevard and eventually overtaking you, he would have already pegged you for a toastmaster or something far worse.

If Assisted Living were a lover, he or she would have already come in out of the mildew and skipped the conjecture. You can’t go on being an evening star forever, fatty.

If Assisted Living were a full-length book, it would have to end like this: “It takes all kinds. But there’s a few it can do without.”

If Assisted Living were a lease, it would have next to nothing to say about kitchen privileges, but the thing would go on for practically forever about unseeable, rumoredly restorative, even miracle-working morning suns beyond compare.

If Assisted Living were a pronoun, we’d have to shut down the language for good.

If this green-stapled, booklettish, pocketable thing were, for perversities of argument alone, a hairstylist, she would be the only one at the salon who worked blindfolded to ensure unexampled exactitudes of asymmetry that made her clients feel choppily perfected for the unbeastly types they’d later cheat on by the book.

Last I checked, if this selfsame chapbook were the selfsame hairstylist left unsketched above, she would spend her tips on the most debasing of the off-the-rack sweets (the chalkiest of candy necklaces, the plumpest of circus peanuts, the stalest and most wafery of the flying saucers with pellets shaking within), then be ferried home by taxi and live murderously, fragrantly, celibate and insomniacal until the exes show up, one by one, gender by gender, bearing their partially unsourced depressions and crying foul about allowances unmade for the debris unclearable from their hearts.

Gary Lutz’s chapbook Assisted Living is published by Future Tense Books, which also published his collection Partial List of People to Bleach. His other books include Stories in the Worst Way, Divorcer, and The Gotham Grammarian (all published by Calamari Archive) and I Looked Alive (published by Black Square Editions).

0 replies on “IF MY BOOK: Assisted Living, Gary Lutz”