“What’s the point of being safe if you don’t feel fully alive?” I stood in Tahrir Square this past January and eyed the graffiti, what was left of it: FREEDOM, it says in English. 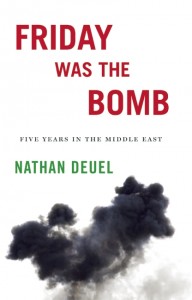 “What’s the point of being safe if you don’t feel fully alive?”

I stood in Tahrir Square this past January and eyed the graffiti, what was left of it: FREEDOM, it says in English. A massive burned-out facade of something remains standing directly across the square from charming old apartment buildings. The famous square is actually a traffic circle; Cairo traffic is insanity wrapped in steel. My mind wandered, flashing to television images watched with my father as he lay dying in a hospital bed in Texas. It was brought back into focus by concertina wire barriers blocking the narrow street where the Egyptian Museum resides and the row of armored personnel carriers stretch the length of the street. The APCs are manned by seemingly agreeable-enough uniformed soldiers. The sign says photos and video are prohibited.

This happens to Nathan Deuel, author of Friday Was the Bomb: Five Years in the Middle East, too. His mind wanders and then is jarred back to the present by violence, either events actually occurring or the ubiquitous threat of same. Deuel and his wife, Kelly McEvers of NPR fame, spent five years in the Middle East—that nebulous term—from September 2008 until September 2013. They made their way from Riyadh, Saudi Arabia, where their daughter was born, through Baghdad, Beirut, and Istanbul, sometimes together but more often apart, as McEvers’s career morphed into that of a war correspondent right before Deuel’s conflicted eyes.

“… I would have no choice but to trust that she would find her own balance, that she’d figure out how to care without caring too much, to give herself over as much as she could to the project of this caring, without leading herself or others into harm, remaining a wife and a mother and the woman she wanted to be—and the war reporter she was quietly becoming.”

Friday is a collection of essays, as opposed to narrative memoir, that addresses the junctures of the political and the personal in a region experiencing tectonic shifts, from the perspective of a previously secure and easygoing American who marched in anti-war protests in New York and once walked from that city to New Orleans. Deuel is forced to examine his assumptions and convictions in the face of a reality that demands planning the route to his daughter’s preschool least likely to include a bomb. “Anthony is Dead”—the title refers to Anthony Shahid of The New York Times—perfectly encapsulates the conflict between our interests and our compulsions. The essay demonstrates how we choose what to be afraid of. The family lives in Beirut but worries about dirty shopping carts. As the author notes, “. . . sometimes it was hard to know when to say no, to make the choice to walk away from what might harm us.” In “When I Finally Saw Blood,” Deuel addresses issues of identity. “Among other problems, it was difficult to be a man, changing diapers, while Kelly swash buckled her way across Mesopotamia.” When a firefight breaks out on their doorstep and most people hide, McEvers slips into the night with her notebook. The author worries. He worries a lot, possibly suffering at times from what I suspect to have been clinical depression. “Over the years,” Deuel writes, “I had become accustomed to treating bad news and adversity as a calling, as opportunities to find uncommon utility and beauty in the simple act of fearing what might happen next.” Inevitably these circumstances take a toll on his marriage: “It isn’t always pleasant for Kelly, all this worrying. She has suggested we might be happier if I let go, if I ‘rolled with the flow.’” At one point, the author admits to a degree of what he terms self-involvement and arrogance in his worrying. Some of this angst comes across as Western navel-gazing. As I learned this past winter, the majority of people in the region don’t have the time, opportunity, or inclination for this sort of self-indulgence. On the Acknowledgements page, Deuel invites us to judge him harshly for this. I won’t. We shouldn’t. The places where we grow up impose a frame of reference. It’s not our fault; it’s only our fault if we never look beyond the frame.

“Homeland in My Homeland” explores how American entertainment, even when generally agreed to be of higher quality than most, misses the mark. There are fundamental misunderstandings here. An episode of the second season of Homeland purported to depict Hamra Street in Beirut. Reportedly shot on location in Israel, these scenes served to reinforce America’s familiar stereotypes of the region. Deuel walked Hamra Street almost every day, past busy restaurants and nightclubs, hotels and a brand new H&M in a bustling cosmopolitan city. The Hamra Street in Homeland is “… crawling with snipers and warlords … a narrow alley lined with sandbags and desert people, everyone waiting to be shot at.” “Flood-Tide Below Me” addresses themes of home and belonging. “The Cannibal Birds of Burgazada” can seem, at times, a metaphor for the entire region. The eponymous essay is a heart-wrenching examination of motivation and responsibility. “I contemplate what my wife is trained to do. What my daughter is being trained to do. What I am training myself to do.”

According to the United Nations, 2012 was the deadliest year for journalists since records have been kept. 2013 was the second deadliest. When the family finally left the Middle East to return to the United States it was not with a sense of joy, not even of relief, but rather a mix of anger and sadness and exhaustion. They had wanted to stay in Beirut, but the responsibilities of parenthood changed what they chose to fear.

“You never evacuate,” an old woman tells us later. She’s lived in Beirut for fifty years. “When you evacuate, the bastards win.”

I walk down the street, head throbbing, thinking about the balance of fear and imagination…The price is clear but the math is impossible to calculate. So what if the bastards win?

Michelle Newby, reviewer and wanderer, blogs as TexasBookLover. A former hedge funds and private equity paralegal, she is attempting to “make amends.” Michelle is at work on a collection of short fiction. This is her first published review. Follow her on Twitter at @TXBookLover.

0 replies on “Book Review: Friday Was the Bomb by Nathan Deuel”