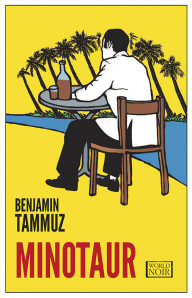 Given its reissue as part of Europa’s World Noir series, you’d be forgiven for dismissing Minotaur as a genre mystery story, or an overworked Police procedural. Even its cover blurb, with its talk of secret agents and John le Carré, encourages us to see it as a mainstream thriller. Nothing could be further from the truth. In his second novel, originally published in Hebrew in 1980, Tammuz instead attempts to map out a fragmentary love story. Along the way it also asks how much we truly know about the people we meet, and questions the false narratives that we build around them.

The novel opens with an unnamed protagonist – “A man, who was a secret agent” – watching two girls on a bus. They are seventeen, he is forty-one. In an instant he falls in love with one of the girls, Thea. So begins one of the most unlikely wooings in modern fiction. Our protagonist cannot reveal himself, so he writes to Thea and sends her records to play in the privacy of her room. He manipulates her even as he overwhelms her with his expressions of love. There are undertones of obsession, of sexual predation. His love seems too unreasonable to be genuine.

Then something strange happens. Tammuz races abruptly through Thea’s story, ending with what appears to be the secret agent’s death – and then he rewinds. The story resets to the beginning. This time it’s told from the point of view of another of Thea’s suitors, a privileged fellow student known as G.R. And just when you’re getting to grips with that, he does it again, pulling the rug from beneath us as he switches to yet another of her lovers, the Greek lecturer Nikos. With each telling of the story more of the details are revealed. The narrative peels back layer after layer, revealing a complex tangle of motives and actions. As we come to understand each character more fully, so we review and decode earlier scenes. With repeat readings comes an appreciation of the multi-dimensional nature of Minotaur’s labyrinth.

If this seems a lot to achieve in a mere 192 pages, then Tammuz’s ongoing themes will also come as a surprise. He attaches the narrative to the history of Israel itself, making his secret agent a cipher for all the troubles the Middle East has endured over the last seventy years. The character acknowledges this: “Who am I? …What was once my private experience has now become collective experience. Formerly I was the only one out of all the children of Israel to wrestle with the Arab at his own private ford Jabok and emerge a sort of Pyrrhic victor. Now all the children of Israel are partners in this folly”. The question of identity, and how it is formed, recurs through each of the narratives. The secret agent repeatedly asks “Who am I?” or “Do I really love her?”. His questions and uncertainty make James Bond look like a Nietzschean superman.

In many ways Minotaur reads as a collection of interconnected stories. Each occupies a world of international intrigue and sudden, explosive violence. To read it in this way is to miss the overarching narrative, however, and its uniquely fractured view of one girl’s life and loves. Tammuz does more than simply tell a story. He questions the very nature of storytelling, exposing the lies we tell ourselves as we imagine narratives for the people who surround us. Rather than le Carré, his debt is to Kafka, and Fowles, and Faulkner. He makes us rethink the way we view literature, and compels us to read and re-read his work in an attempt to navigate the complex maze he has created.

Ignore the secret agent at its core, and the sequence of car crashes and gunshots that punctuate it – this is no genre thriller. Minotaur is a minor modern classic, and a bold exploration of what it means to be a storyteller. Maybe that’s the greatest mystery of all.