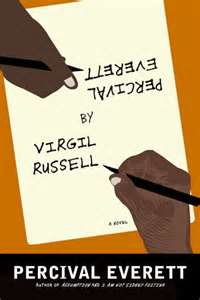 There are many confusions and uncertainties in Percival Everett’s latest novel. At times it’s unclear who the narrator is; even the narrator himself seems unsure. The narrative shades in and out of fiction and memoir. The plot (such as it is) folds in upon itself and becomes something wholly different. Then there’s that title, a postmodern nod towards the hall of mirrors that lurks within its pages. If Finnegan’s Wake hadn’t already been written, you might be tempted to call it groundbreaking. Instead, it takes Joyce’s wry experimentation and turns its focus upon race relations, the progress of American history, and the bonds between father and son.

If that makes Percival Everett by Virgil Russell sound gnarly and impenetrable, then I’ve done my job well. This is a difficult novel to read. Some chapters are obscure enough to read like abstract poetry, and while others rely upon more traditional plot structures, it’s never long before these structures start to warp and change. The first third of the novel vaguely follows a narrative about a handyman/doctor who falls in with a pair of overweight brothers, and you might almost feel that you’re starting to get a grip on where things are heading. Then Everett pulls the ground from beneath our feet. The characters disappear to be replaced with an entirely new narrative set in a retirement home. If it was Everett’s aim to confuse and obfuscate, then he succeeds. This is a novel that seems to writhe and twist out of our grasp at every turn.

Fortunately Everett is interested in more than just confusing his reader. By manipulating narrative structures in new and interesting ways he asks questions of both our expectations and the novel’s conventions. How trustworthy can a narrator be? Does it really matter who the narrator is, or is the story paramount? Can a novel be structured around themes rather than plot? He doesn’t always have the answers to his questions, but it’s hard to ignore the probing nature of his experiments.

That probably makes Percival Everett by Virgil Russell sound dry and academic, but the author’s wit and sense of playfulness keeps it from drying out entirely. Everett himself has a strong authorial voice that can’t be masked by the changes of narrator and plot which lie on the surface. Even in his densest, most obscure passages his natural rhythm keeps the text buoyant, and the constant wordplay is frequently amusing even when taken out of context. As Everett’s narrator puts it: “it takes a lot more effort and comprehension of the inherent and ubiquitous structures of meaning to construct nonsense than it does to utter the plainest of mundane assertions.” For an experimental novel, this is an extraordinarily funny read. Perhaps that’s another lesson learned from Joyce: if you’re determined to tear apart the conventions of the modern novel, at least give the reader something amusing to hang onto.

As a literary experiment Percival Everett by Virgil Russell doesn’t always succeed. There’s a sense in which we’ve seen many of these tricks before, albeit in different contexts. But Everett’s voice is unique enough to craft something new and intriguing out of the chaos, something that feels both contemporary in its focus and timeless in its scope. That he does so with an irrepressible playfulness only adds to the novel’s power. By the time the final page turns you might not understand everything that’s happened, and you certainly won’t be able to pinpoint what exactly this book was about. But you will have been amused, and entertained – and you’ll almost certainly start questioning narrators in a way that you never have before. Maybe that was all Percival Everett wanted.