Our early twenty-first century desire for “reality” now seems inseparable from the inception of the War on Terror. Just after 9/11, Ian McEwan confessed that he nearly lost faith in the novel, saying in 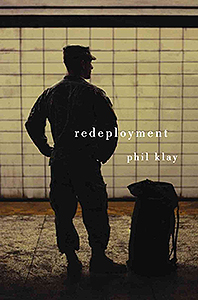 Our early twenty-first century desire for “reality” now seems inseparable from the inception of the War on Terror. Just after 9/11, Ian McEwan confessed that he nearly lost faith in the novel, saying in an interview that he considered “abandoning fiction and concentrating on fact.” McEwan’s sentiment was shared by the publishing industry, as evinced by shams like James Frey and Greg Mortenson. Our “reality hunger,” as David Shields calls it, expressed itself as a national obsession with soldiers, addicts, cops, and doctors, the human beings who seemed to have the monopoly on “reality,” if by reality we mean a certain species of physical intensity.

The pendulum swings back in Phil Klay’s first collection of short stories, Redeployment. I love this book. And maybe that has something to do with the fact that Klay, a Marine, is describing not just war, but the war I witnessed in the Al Anbar Province of Iraq. Maybe my non-fiction connection blinds me a bit to the real conditions of Klay’s fiction. And maybe I’m not alone. Maybe many readers, otherwise reluctant to engage contemporary fiction, will be drawn to these stories out of curiosity about history, “the real story” about the war in Iraq. If by “real,” such a reader means authentic insider language and an intimate understanding of cultural collision, that reader will be more than satisfied by Redeployment.

But the voices of Phil Klay are for more than just vets and the dwindling population of American citizens who feel they have a stake in their country’s military. In non-fiction and Iraq war novels like The Yellow Birds and Billy Lynn’s Long Halftime Walk, the author comforts the reader with a singular perspective. Klay, risking his narrative to the shrinking ranks of short story readers, jars us with an army of voices. But this house is in order. Klay is a master ventriloquist. He’s a Coptic Christian in “Psychological Operations.” He’s a humble chaplain in “Prayer in the Furnace.” He’s a jacked-up fobbit in “OIF,” spouting abbreviations like machine gun fire. In “Bodies,” he’s a sensitive and flustered soldier returning to a gothic ex-girlfriend who lives in her parents’ basement. In one of the collection’s best, “Money As A Weapons System,” he plays Nathan, a baffled Foreign Service Officer charged with coordinating civilian affairs projects: a clinic, a water treatment plant, a bee-keeping initiative for Iraqi widows, and, yes, the distribution of baseball uniforms to Iraqi youths as a means of inseminating the country with American values.

In order to pull off these tasks in a country where there seems to be a shortage of everything except widows, Nathan must learn the art of illusion. He must learn to deploy a voice other than his own. He must learn to ignore his hunger for fact. When he asks an inscrutable figure named Major Zima if a set of stats pertaining to a request for funds is true, Zima is described as putting on his “shocked face.”

Of course, Zima’s not telling the truth, truth with a lowercase “t.” The Truth of the war in Iraq itself is fiction. Klay writes:

There are two ways to tell the story. Funny or sad. Guys like it funny with lots of gore and a grin on your face when you get to the end. Girls like it sad, with a thousand-yard stare out to the distance as you gaze upon the horrors of war they can’t quite see. Either way it’s the same story.

Klay’s characters return, over and over, to a divided consciousness. They are constantly torn:

There’s a perversity in me that, when I talk to conservatives, makes me want to bash the war and, when I talk to liberals, defend it. I’d lived through the Bush administration fucking up on a colossal scale, but I’d also gotten a very good look at the sort of state Zarqawi wanted to establish, and talking with anybody who thought they had a clear view of Iraq tended to make me want to rub shit in their eyes.

Klay’s characters are full of shit, stories and lies, noble and otherwise. They spare our feelings. They cover for their buddies. They mock the seemingly naïve question of “a liberal pussy journalist” and then answer that question with sophistication. This is a storyteller whose concern is not found in the shallow waters of fact and polemic, the reductive categories of liberal or conservative.

Wallace Stevens once wrote: “In the presence of extraordinary actuality, consciousness takes the place of imagination.” Stevens was right. The imagination disappears during some of the most intense physical moments of our lives. But it must always reappear in the telling of the tale, for there’s always an audience, another life to consider, a bridge to build. Phil Klay’s stories are not without a wide audience in mind, and they are not without an exit strategy, a vision. His account of Iraq is about much more than Iraq. Redeployment has burned the bridge between fiction and reality in order to build it once again. And that feels right.

M.C. Armstrong embedded with SEAL Team 1 in Haditha, Iraq. He published extensively on the Iraq war as a correspondent for The Winchester Star. He is the winner of a Pushcart Prize in fiction. His fiction and non-fiction have appeared in Esquire, The Missouri Review, The Gettysburg Review, The Literary Review, Epiphany, Kearney Street Books, Mayday, and other journals and anthologies. He lives in Greensboro, North Carolina.